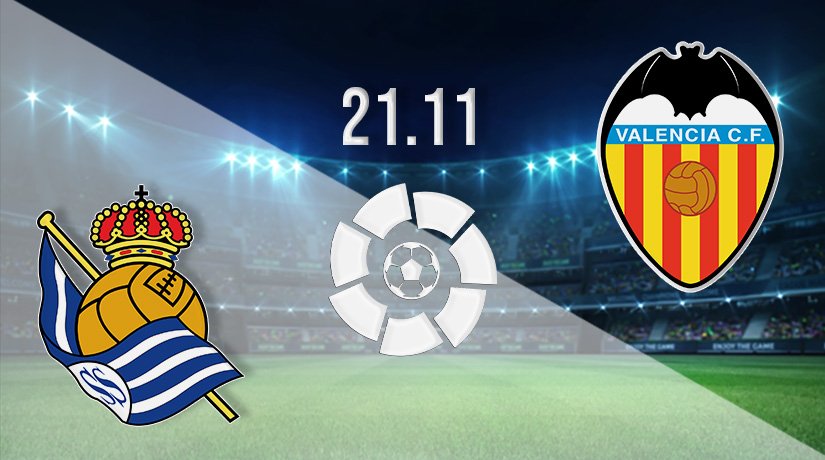 The Spanish La Liga returns to our screens this weekend with matches played from Friday evening through to Monday. The best of the action from round 13 takes place on Sunday, where one of the four games marked on the schedule caught our eye. Real Sociedad enjoys a home advantage in this game over Valencia, and with both teams in desperate need of the three points, followers are certain to enjoy a gripping 90 minutes of action. Which team will come out on top and grab the desired result?

We saw a shock La Liga title win for Atletico Madrid last season, but the champions lost some of their best players during the off-season and appear to be a weaker team than they were this time last year. We have another surprise league leader, though, as Real Sociedad leads the way with the campaign racing towards winter. Sociedad is in the pole position at present and knows a win at home on Sunday would ensure they remain there. It’s up to Valencia to help topple them while taking the three points needed to close the gap that exists between themselves and the European places.

These teams met twice last season on league duty, and there was little between the rivals on each occasion. The first match ended in an entertaining 1-0 away win for Valencia at this venue in September, but the return was a far more dramatic affair, producing a 2-2 finish that went right down to the wire. Valencia scored a late goal and was reduced to 10 men, but Sociedad couldn’t make their numerical advantage count.

Followers of Real Sociedad had high hopes for their team this season, but not many of them would have expected to see the side challenge for the La Liga title. That is exactly the position the club finds itself in as they sit top of the table after 13 games played with a one-point advantage over the chasing pack. They are out in front with a record of eight wins, four draws and one defeat, scoring 19 goals and conceding 10. It is a shock to see Real Sociedad on top, rather than the likes of Real Madrid or Barcelona, but the team fully deserve their lofty position. The pressure is now on the players to protect it.

For as impressive as Sociedad have been so far, it’s worth reminding followers of the Spanish La Liga that the current pacesetters have played a game more than more other sides in the division, with 13 rounds under their belt as opposed to the dozen played by the other three teams currently in the Champions League position. In their last five games, they are unbeaten with that purple patch of form made up of three wins and a pair of draws. They are a team punching well above their weight but don’t look to be affected by the pressures that come with being the side to beat.

Real Sociedad were last seen in action, collecting their eighth win of the campaign before the international break. It was three points they desperately needed to get their hands on as each of the other two sides in the top three, Real Madrid and Sevilla, also won. Sociedad beat Osasuna 2-0 on the road thanks to goals from Merino and Januzaj, who were both on target in the second half. That comfortable win followed a disappointing 1-1 draw in the Europa League against Sturm Graz just three days before. It sets the team up nicely for the upcoming run of games.

Valencia is 10th in the league table after 13 games, and a check on their form to date shows they have won four games, drawn five and lost the other four. The visitors have found the net 21 times but conceded 20 goals, and that is a sound explanation of why the team is stuck in the middle of the chart. We delve into those numbers and see that Valencia are the second-highest scorers in La Liga, behind Real Madrid in second place. Still, they have shipped more goals than Getafe, who are bottom of the league and facing relegation.

The away team aren’t nearly as high in the pecking order as they should be with that strong attack, and it’s plain to see the fragile and nervy defence is holding back the club’s progress. It’s still far too early in the campaign for the club’s supporters to panic as the 17 points gained means they are two behind Osasuna and the European spots but also two points better than Mallorca down in 13th. The outcome of this match could prove to be crucial in where the team goes from here.

Valencia has won only one of their last five league games, with that sketchy period consisting of two draws and a couple of defeats. They are unbeaten in two, though, taking four points from the last six available to them. They beat Villarreal 2-0 at home before fighting out a scrappy but entertaining 3-3 home draw with champions Atletico Madrid last time. Valencia scored two goals after 90 minutes to come from 3-1 down and snatch a draw.

Real Sociedad are top of the league and deserve to be, but their position is under threat as the sharks of La Liga begin to circle. Real Madrid is the main danger, but it’s a bunched up top three with one point separating them. We could see this season follow the example of last and end in a grandstand finish.

Real Sociedad have the class and confidence to win this match, but they can’t afford to take Valencia lightly in their preparations. The away team are improving, as can be seen from the results and performances in their last two games. They head into this match, knowing the size of the task ahead of them in beating top of the league but also aware that all the pressure is on the home side.

The pre-match betting odds available to 22bet members have Real Sociedad priced as the favourites with odds of 1.775 available. Those after the bigger odds on an away win will find Valencia at 4.74, or you can have the draw at 3.58.

Make sure to bet on Real Sociedad v Valencia with 22Bet!