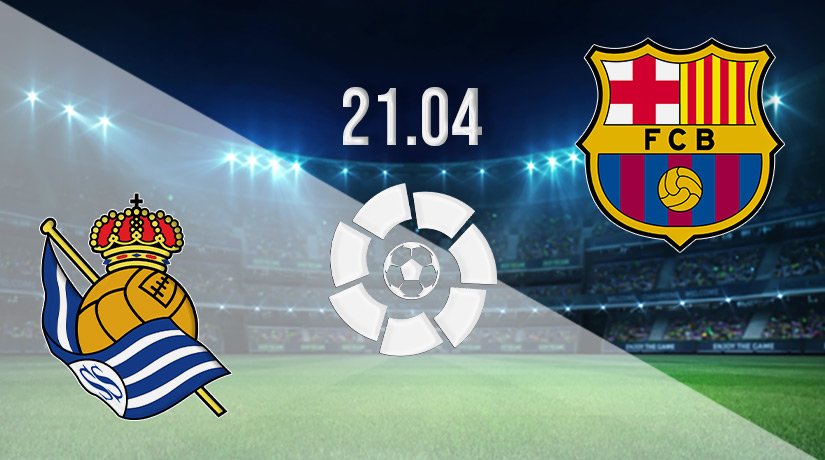 After back-to-back defeats against Eintracht Frankfurt (3-2) in the Europa League quarter-finals and Cadiz (1-0) in La Liga, Barcelona will travel to the Reale Arena to face Real Sociedad on Thursday at 20:30GMT as they seek to secure their position inside the top-four in the La Liga run-in.

Can Real Sociedad Cut the Gap to Barcelona down to Two Points with a Win and Bolster their Chances for a Top-Four Spot?

Imanol Alguacil’s side are unbeaten in five matches, and they will be looking to extend this record as they mount a belated bid to qualify for next season’s Champions League by clinching a top-four berth.

Sociedad are currently five points behind Barcelona (2nd), Sevilla (3rd), and Atletico Madrid (4th). With six matches remaining in the season, Alguacil’s men have a chance to mount a challenge for the top four.

A win against Barcelona will cut the gap to two points, which will place them in good stead for the run-in.

Can Barcelona Bounce Back to Winning Ways Against Real Sociedad?

Xavi’s side have stumbled in recent matches as they have been knocked out of the Europa League by Eintracht Frankfurt and lost 1-0 away at Cadiz.

The Blaugrana will be looking to get back to winning ways and avoid being marooned in bad form at a pivotal period of the season.

With seven matches remaining for Barcelona, consistency will be crucial to ensure that they can remain in the top four and qualify for next season’s Champions League.

In the last ten rounds of La Liga fixtures, Real Sociedad have collected 20 points out of the available 30. They have won six times, drawn twice, and lost twice.

However, this form has seen Alguacil’s side drop from their position in the top four down to sixth.

Sociedad have lost considerable ground in the fight for the top four. They are currently five points behind fourth-placed Atletico Madrid with six matches remaining in their season.

The surprising 1-0 loss at Cadiz was Barcelona’s first in ten matches. In this run, they have won eight times, drawn once, alongside the defeat on Monday night.

They have collected 25 points out of the available 30 in their last 10 matches. This run of form has seen Barcelona climb the table to second and in with a chance of finishing within the top four.

Alguacil will be without left winger Mikel Oyarzabal ruptured his cruciate ligament on March 17th, 2022. The 24-year-old is expected back by October 17th.

Left-winger Ander Barrenetxea is also missing with a thigh muscle rupture with the 20-year-old having missed 18 matches for Sociedad already this season.

Alguacil will also not be able to call o experienced left-back Nacho Monreal who is sidelined with a knee injury. Centre-forward Carlos Fernandez is also out with a ruptured cruciate ligament since July 31st, 2021.

Gerard Pique is side-lined for Barcelona with a tear in the abductor muscle; the 35-year-old center-back has already missed three matches for Xavi’s side since April 8th.

The striker has eight goals and two assists in 33 appearances this season. Alongside Sorloth, Isak has been crucial for Sociedad’s fight for the top-four, and he will be essential in their clash with Barcelona.

The fit-again Depay is central to Barcelona’s firepower. He is the Blaugrana’s top scorer with 11 goals and 2 assists in 32 appearances. He will be central to their chances of beating Sociedad on Thursday.

Expect Barcelona to dominate possession and to build up play patiently from the back. Real Sociedad will employ a vertical approach to their play with counter-pressing and fast attacks.

Barcelona are favored to bounce back to winning ways and take all three points.