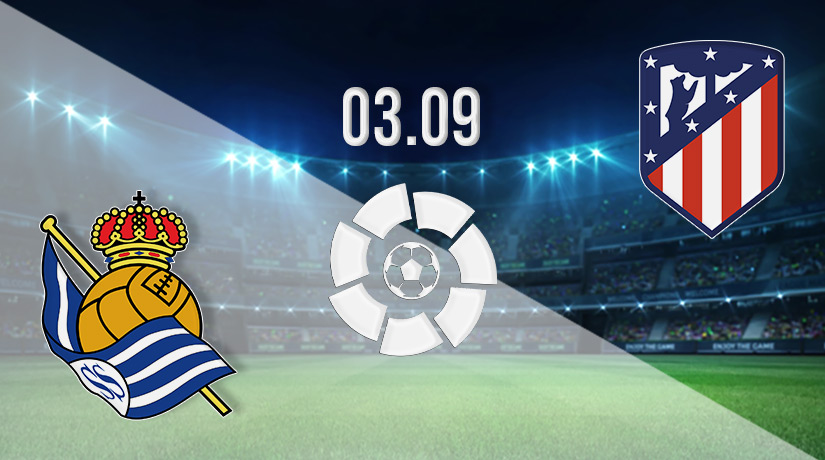 Level on six points after three rounds of La Liga fixtures, and separated on the table by three goals, Real Sociedad will clash with Atletico Madrid at the Estadio Anoeta on Saturday at 17:30 GMT, as both teams seek to steady their early form and bolster their points tally and position on the La Liga table.

After two wins and a defeat from their first three La Liga outings, Real Sociedad will be looking to continue their good form with a big win against title hopefuls Atletico Madrid on Saturday.

In their two wins, Imanol Alguacil’s side have relied heavily on their defensive solidity to eke out 1-0 wins against Cadiz and Elche. They will seek to retain their solidity and compactness against the Atletico attack.

Coming after the 1-4 reverse against Barcelona, Imanol Alguacil will be looking for discipline, compactness, and an attacking threat in transition when they face Atletico Madrid on Saturday.

Can Atletico Madrid Take Three Points Away from Home to Bolster their Early-Season Form?

For a side harboring La Liga title hopes, Diego Simeone’s side will be looking to improve after an opening return of six points out of the available nine.

Already trailing the league leaders by three points, Atletico Madrid have to maintain their consistency in the league to keep up with the relentlessness of the championship, starting with their clash against Real Sociedad on Saturday.

Diego Simeone will focus on a display with a balance between defensive solidity and attacking flair. This balance was missing in their second game where they lost 0-2 at home to Villarreal.

Imanol Alguacil’s side have started the season impressively with two wins and a loss; they have collected six points out of the available nine and they are currently eighth on the table.

The only loss of their season came against the in-form and strengthened Barcelona side; this match ended in a one-sided 1-4 score line.

However, Sociedad have kept two clean sheets in the first three matches. In each of the matches, they managed a shut-out they collected all three points against Cadiz (0-1) and Elche (0-1).

They will be looking to replicate this template in their clash against Atletico Madrid on Saturday.

Diego Simeone’s side have collected six points and dropped three; they have won twice and lost once in their opening three rounds of La Liga outings.

They opened the season with an emphatic 0-3 away win against Getafe; however, they followed this up with a 0-2 reverse against Villarreal in their first real test against a top-six side.

However, Atletico bounced back to winning ways with a narrow 0-1 win at Valencia. Simeone’s side have scored four goals while conceding three; they have kept two clean sheets in the process.

Diego Simeone will be looking to leverage this form into getting three points at Sociedad on Saturday.

The experienced Spaniard is influential in the manner that Real Sociedad play. The former Manchester City playmaker is important in connecting midfield to attack, creating chances, and allowing attackers to run into balls and space that pose danger to opponents’ defenses.

Silva will be important for Sociedad when they face Atletico because of his creativity, movement, and passing.

He will especially be important during transitions because he can use his passing range to find teammates in dangerous positions in the opponent’s half.

Having featured in all three matches, his link-up in midfield and attack is important for Sociedad to retain possession and to use it to hurt their opponents.

The 29-year-old Spanish striker has two goals in three appearances for Atletico this season.

His on-pitch relationships with Joao Felix or Griezman have been important in driving Atletico forward.

The former Juventus attacker gives Atletico pace, finishing, and aerial threat; these are important attributes in deciding matches or opening up stubborn defenses in La Liga.

Morata will be important as Diego Simeone’s side go hunting for the win on Saturday against Real Sociedad.

Real Sociedad will focus on being compact against the Atletico attack. They will play an organized, disciplined, and hardworking low-bloc with options for fast breaks to pose an attacking danger.

Atletico will be expected to dominate the match using possession and pressing. However, Diego Simeone will insist on the team retaining their shape and identity defensively, even as they look to attack and create chances.

Given the form of both teams, as shown in their identical starting records to this season, a draw is the most likely result with each team taking a point.