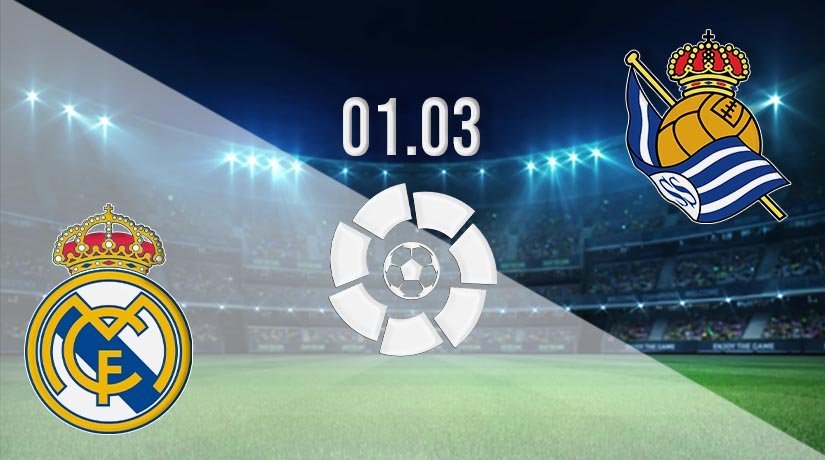 It’s the first day of March and La Liga champions Real Madrid return to league action following their midweek Champions League exploits. The home team are involved in a battle with city rivals Atletico Madrid and Barcelona to retain their crown and it’s a fight that is sure to go right down to the wire. We are entering a vital stage of the season. Can Real Madrid find the form needed to win the title?

A competitive match is expected on Monday evening in Madrid after these teams played out a tense draw in their most recent meeting back in September. That game ended goalless, but it did extend Madrid’s unbeaten run against Sociedad to two games. Will that run continue?

Madrid three off the pace

Real Madrid entered round 25 of the La Liga season with stats showing 16 wins and four draws against four defeats, scoring 42 goals while conceding just 19. The 52 points gained leaves them three off the pace set by Atletico Madrid who also have a game in hand. Real have done well to fight their way back into it but know there’s now no room for error as the race gets serious.

Confidence is high in the home dressing room after Blancos put together an eye-catching four-game winning run, moving them five points ahead of Barcelona in third place. The locals were last seen in domestic action beating Real Valladolid 1-0 away from home, claiming an important three points thanks to a goal from Casemiro on 65 minutes. More of the same is needed here.

Sociedad have won their last three

Sociedad are performing above expectations so far and sit fifth in the table with a strong chance of improving and grabbing a place in the top-four. Champions League football next season is a possibility if they can continue their form and that’s something the squad must keep in mind as the challenges continue to come at them thick and fast.

The visitors arrive in town on the back of an impressive unbeaten run, drawing two and winning three of their last five games. Sociedad have also picked up each of the last nine points available to them in the league so face Madrid without fear. If they can get something out of this match it will seriously improve their chances of finishing in the top-four.

Both teams find themselves in a fantastic position but that comes with pressure and the players know they must continue their impressive form until the end of the season. A slip up here could have a huge impact on their chances of winning the title or finishing in the top-four. That should make this a nervy game but both clubs are scoring for fun at the minute so armchair fans hope to see a few goals.

Make sure to bet on Real Madrid vs Sociedad with 22Bet!