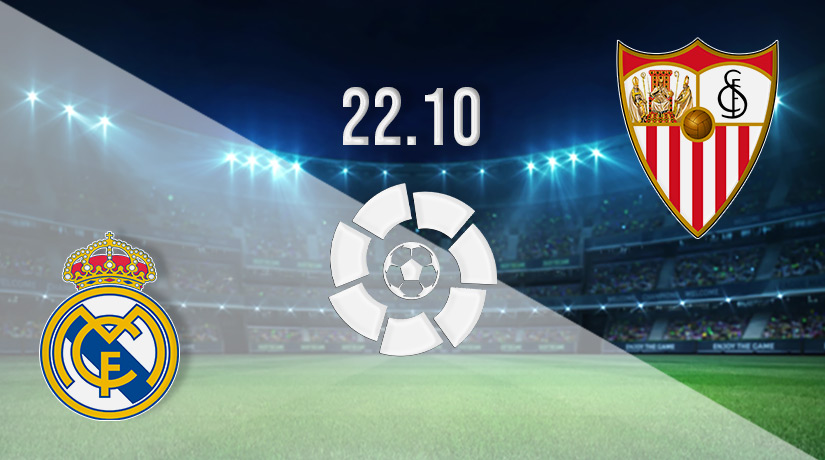 Fresh from their Clasico triumph, the champions Real Madrid will look to press home their advantage at the top of La Liga when they host the out-of-form Sevilla at the Santiago Bernabeu on Saturday at 20:00 GMT.

Can Real Madrid Extend their Winning Run and Advantage at the Top of the Log?

Carlo Ancelotti’s charges were at their electric best in dispatching this season’s biggest La Liga rivals Barcelona at the Bernabeu last weekend. Los Blancos will be looking to maintain or extend their advantage at the top as they host an out-of-sorts Sevilla that have had to sack their manager.

Real Madrid will look to maintain the energy and tempo in their performances, as they look to leverage the danger posed by the newly crowned Ballon d’Or winner, Karim Benzema up front.

Rotating the squad will be crucial, with fixtures coming thick and fast ahead of the mid-season World Cup in Qatar.

Can Sevilla Turn Around their Form as they seek to climb the Log?

Jorge Sampaoli will be looking to build on the 0-1 win away to Mallorca last Saturday when his charges face Real Madrid at the Bernabeu.

Having scored just nine goals while conceding 14, Sampaoli’s job will be to bolster Sevilla’s attacking confidence while bolstering their defensive record. The defensive shape will be important at the Bernabeu coming up against the quality of Real Madrid’s attack, especially Karim Benzema.

At the same time, Sampaoli’s men will look to pose an attacking threat through transitions and counter-pressing at the right time and in the right areas during the match.

Los Blancos have had a flying start to the season as they look to lay down the marker in defending their title. They have won eight times and drawn once in their opening nine matches in La Liga.

Their unbeaten run has been characterized by 22 goals plundered and eight goals conceded. Together with a healthy plus 14 goal difference, Real Madrid have collected 25 points out of the available 27.

In their last five outings, Ancelotti’s charges have won four times and drawn once. They have had victories against Mallorca (4-1), Atletico Madrid (1-2), Getafe (0-1), and Barcelona (3-1). They have also drawn 1-1 against Osasuna.

Sampaoli’s charges are having an underwhelming season; they have won just twice in nine while drawing three times and losing four times.  They have collected just nine points out of the available 27.

Having notched just nine goals all season, and conceded 14, their negative five-goal difference and their nine points, mean that they currently sit 14th on the La Liga log, just two points removed from the drop zone.

In their last five outings, Sevilla have won twice, drawn two times, and lost once. There are signs of resurgence under the new manager Sampaoli.

The Ballon d’Or winner will be looking to make up for the lost time in La Liga as he has only recently come back from injury. The French international will be looking to step up his form for Los Blancos ahead of the World Cup in Qatar where he is likely to play a starring role for France, the world champions.

Benzema will be crucial for Madrid this weekend as they seek to find solutions to the problems that will be posed by Sevilla, who are looking to get their season back on track.

The midfielder was in hand to play the winning goal against Mallorca last weekend. His influence in this team will only grow, especially when they face Real Madrid.

Dominating the midfield areas will be crucial in providing the platform for a good performance against the champions, and bolstering the chances of getting something from this clash.

Real Madrid will look to dominate possession and press Sevilla across the pitch. They will look to leverage their domination in creating chances and taking them.

Sevilla will focus on being solid and compact in their defensive shape while attacking rapidly in transition situations.

Real Madrid will have too much for Sevilla and they will win the match.

Make sure to bet on Real Madrid vs Sevilla with 22Bet!