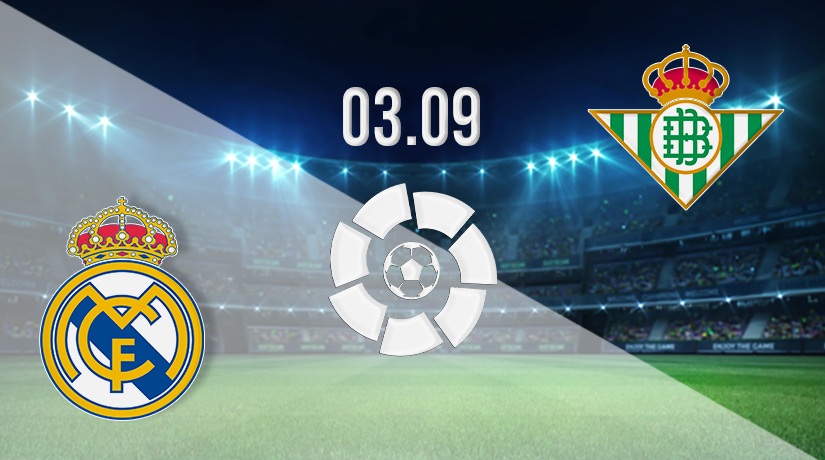 It is first versus second this weekend in La Liga as reigning champions Real Madrid welcome second-placed Real Betis to the Santiago Bernabeu on Saturday at 15:15 GMT as the two pacesetters of La Liga go head-to-head for three points, which will have implications on the top of the table early on.

Can Real Madrid Make it Four Wins out of Four at the start of the La Liga Season?

Carlo Ancelotti will be satisfied with his side’s start to the defense of their La Liga title this season, with three wins out of three.

However, he will be wary of Real Betis, who have made an impressive 100% start to the season. Ancelotti’s focus will be on bolstering the performance of his side as they look to retain their perfect record this season heading into the fourth round of La Liga fixtures.

Real Madrid will also be wary of the fact that they have not kept a clean sheet this season, and have conceded a goal in each of the three matches they have won.

Bolstering their defensive organization will be a top priority for Ancelotti and his defenders.

Can Real Betis Stun the Champions at the Bernabeu and Take all Three Points?

Real Betis’ early season form has been brilliant. Manuel Pellegrini will be pleased with his side as they have maintained a 100% start to the season with nine points out of the available nine.

They travel to the Santiago Bernabeu on the backdrop of brilliant performances in La Liga, and they will be confident in taking something from the Champions’ home.

Manuel Pellegrini will set up his team to be solid and compact even as they try to express their style of football. They will press Los Blancos and make their life uncomfortable.

With three wins out of three, Real Madrid sit at the top of La Liga after three rounds with nine points and a goal difference of six. Ancelotti will be satisfied with this start and will ensure Los Blancos do not rest on their laurels as they defend their title.

Real Madrid have nine goals while conceding three in the process. They have conceded in every match this season. The lack of clean sheets will be worrying for Carlo Ancelotti, especially coming up against the in-form Real Betis side.

The three wins for Ancelotti’s men have come against Almeria (1-2), Celta Vigo (1-4), and Espanyol (1-3). Los Blancos will play their first La Liga home match against Betis on Saturday.

Betis opened the season with a 3-0 win against Elche before beating Mallorca (1-2) and overcoming Osasuna (1-0) even after having German Pezzella sent off in the 73rd minute.

Betis have scored six goals while conceding 1. They have also kept two clean sheets. These statistics highlight the balance Pellegrini has established in the Betis team, making them tough to beat but also dangerous in attack.

With three wins out of three, Betis have nine points like league leaders Real Madrid, and they are only second on the table due to goal difference.

Manuel Pellegrini will be looking for a win that will see them leapfrog Real Madrid to the top of the table and collect three precious points for the season.

The 34-year-old French striker has picked from where left off last season. He has nodded three goals in three appearances for Real Madrid already this season.

His performances are crucial for Los Blancos. Apart from the goals, Benzema provides a robust work rate, intensity, pressing, and movement that is central to Real Madrid’s ability to create and take chances.

Benzema will be important for Real Madrid on Saturday when they take on a disciplined and high-intensity Real Betis side. The striker will be crucial in pressing from the front and taking chances Los Blancos create.

With four goals in three La Liga appearances for Real Betis, Iglesias is the team’s stand-out performer and talisman.

The 29-year-old Spanish striker has been crucial in scoring goals and taking his team to the top of the table and maintaining their 100% start to the season.

His key attributes, such as his pace, intensity, runs, and creativity, are important tools to Manuel Pellegrini and his team’s style of play.

Iglesias will be central to Betis’ game plan on Saturday as they seek to get maximum points from the home of the champions.

Real Madrid will seek to dominate possession and the game overall. They will seek to press from the front and focus on squeezing Betis by denying them possession.

Betis will seek to assert their style on Madrid as well. Manuel Pellegrini will insist on Betis retaining their shape and approach and being brave in their approach to the match against Madrid.

With home advantage and being in a good vein of form, Real Madrid are favorites to win this match and take the three points.

Make sure to bet on Real Madrid vs Real Betis with 22Bet!