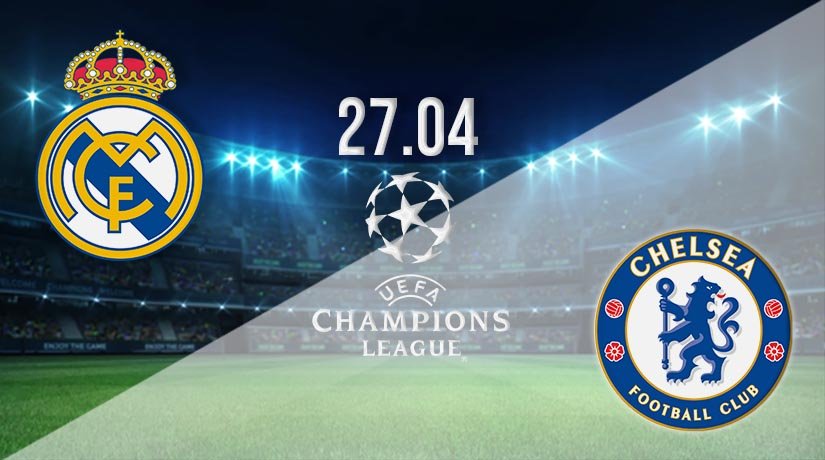 The semi-finals of the UEFA Champions League begin in Spain on Tuesday when La Liga champions Real Madrid host Premier League club Chelsea. This first-leg clash kicks off at 20:00 and will be beamed live worldwide to a massive audience as both clubs battle for a place in the final.

The home team is out for revenge after losing 1-0 in the European Super League when meeting the Blues. Gus Poyet scored the winning goal in that match back in 1998. An exciting piece of information regarding this game is Real Madrid have never recorded a win over Chelsea in their previous three attempts. The head-to-head stats stand at two wins for the Londoners and one draw. Blancos aim to get off the mark here.

Real Madrid eliminated last season’s English Premier League champions, Liverpool, in the previous round, and they did so without too much resistance. The Spanish giants won 3-1 on aggregate, doing the damage in the first leg with a 3-1 victory before seeing the game out at Anfield with a goalless draw. It brought an end to Jurgen Klopp’s team’s challenge in this season’s competition, and the Reds now have little to play for in the remainder of the season.

Madrid has followed that 0-0 finish in Merseyside with two goalless draws in their last three games. They drew a blank with Getafe and Real Betis but were able to defeat Cadiz 3-0 away from home. Failure to find the net could cost Madrid the league title.

Chelsea is battling hard in the Champions League and Premier League. They are hoping to blast their way through to the final of this competition and also aim to finish in the top four of their domestic league and secure Champions League football for next term. The Blues currently have two chances to qualify for next season’s tournament, through the top four in England or as winners of this season’s competition.

Chelsea lost 1-0 at home to Porto when last in Champions League action but progressed 2-1 on aggregate. They followed that with a hard-fought 1-0 win over Man City in the FA Cup semi-final, drew 0-0 at home to Brighton in the league and beat West Ham 1-0 in Stratford Saturday thanks to a Timo Werner strike.

The recent form of both teams suggests this will be a competitive but tight affair, and both legs will be needed to confirm a winner. Both Madrid and Chelsea have been able to keep things tight in defence but have struggled for goals.

More of the same will suit the Londoners who will see another goalless draw as a huge result. They could even get away with a narrow defeat if they could get on the scoresheet in Madrid. Chelsea aims to ensure the tie is competitive back at Stamford Bridge for the second leg.

Make sure to bet on Real Madrid vs Chelsea with 22Bet!