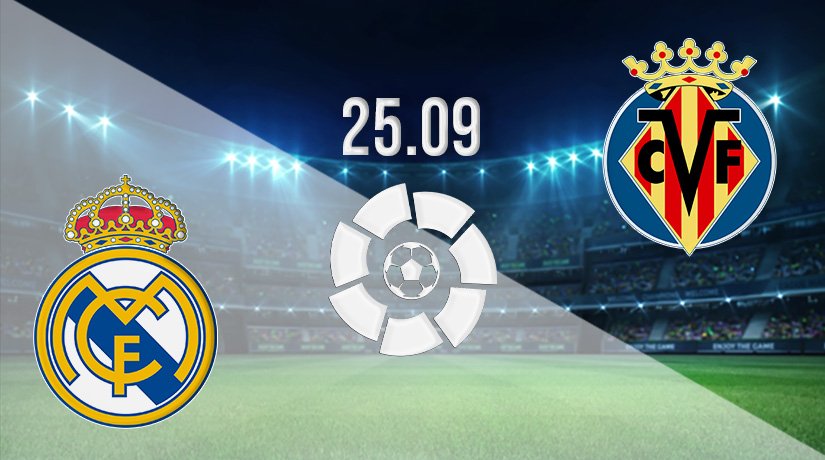 With no UEFA competitions to get in the way this week, the Spanish La Liga uses the time wisely by planning a busy few days of action. Games take place throughout the week before we get into the thick of another weekend, where there are plenty of exciting matches to look forward to. A match of interest comes from Madrid, where Real take on Villarreal from 20:00 GMT on Saturday. This game is the fourth of four on Saturday and will attract a huge audience with the stadium packed to capacity while followers worldwide keep up to speed with the play live on television.

Real Madrid lost the league to rivals Atletico Madrid last season but started this campaign as the favourites with most pundits to wrestle the trophy back from their neighbours. Blancos has certainly started brightly enough and entered the week on top of the table and looking like they would take some shifting. Will Villarreal burst their bubble by leaving with all three points? The visitors are certainly good enough to make things difficult for their hosts.

The stats attached to this match make for interesting reading, with Real Madrid dominating the head to head figures. The home team currently sits on 24 wins, with Villarreal managing just four victories over Blancos. The remaining 14 games have ended in a draw, and the away team may view a share of the spoils here as a decent result. Will they get a point?

The pressure is on Real Madrid this season after doing the hard bit and finishing higher than Barcelona the last term only to see their derby rivals Atletico Madrid pip them to the crown. Atletico were fully deserving of the championship last season as they were strong throughout the campaign and were able to hold their consistency when it mattered in the final few rounds of the campaign. A disappointment for Real, but they have the players to bounce back and return to the head of Spanish football, especially with most pundits expecting Barcelona to struggle post-Messi.

Real Madrid started this week on top of the division with stats of four wins and one draw from their opening five games. They were one of the last remaining unbeaten teams in this division and have given themselves a solid base on which to launch their season. Madrid is the highest scorers in the league on 15 goals after five games which is at least five better than the chasing pack. In defence, the pacesetters have conceded seven which is more than any other team in the top 12 at this level.

The home team won their third game on the bounce last weekend when beating Valencia 2-1 away from home in what turned out to be a real battle. It was the beaten team that took the lead, and they looked like a side on their way to victory with 80 odd minutes on the clock, but Blancos refused to give up. They got themselves level through Vinicius Junior on 86 minutes, then took the lead thanks to a winning goal by Benzema on 88 minutes. A smash and grab performance, but it was a winning one.

Villarreal faces the unenviable and daunting trip of heading to the home of Spanish football’s most famous team and with the locals in great form. The visitors know they must concentrate on their own game and can’t allow themselves to be fazed by the strengths of their hosts. They will arrive in Madrid stuck at the wrong end of the table and are currently much closer to the bottom than the top of the league. Despite that stat, Villarreal was one of only a handful of La Liga teams still unbeaten heading into the week, and they avoided defeat in each of their opening four games.

They were also without a win in that time, drawing each of their first four. The Villarreal players and coaching staff are making the team difficult to break down and defeat, but they must be a bit more ambitious if they are to climb the table. Turning one point into three is the key between a mid-table club and one capable of pushing for the European places. Having said that, most Villareal fans would see another draw as a great result in Madrid, and we could see the away team play for a share of the spoils.

Villarreal came into the week on the back of their fourth draw on the bounce when playing out a tense 0-0 away to Mallorca. That goalless finish came after a dramatic 2-2 with Atalanta at home in the Champions League. Villarreal has finished level in each of their first six games in all competitions this season, including in La Liga, the Champions League and the Super Cup against Chelsea.

Real Madrid is deserving favourites on their current form and the fact they are the home team, but the hosts will know the dangers of taking Villarreal lightly. The home fans will be out in force and expecting another three points, and the players will feed off that optimism and backing from the stands. If Real Madrid performs anywhere near their best, they should have enough class to win the three points and keep their title push on track.

Villarreal is a tough team to break down, and that fighting spirit will be required again here if they are to get anything out of this match. The away team will come to Madrid looking to defend deep, keep any mistakes to a minimum and invite their hosts to break them down. The longer this match remains level, the more frustrated the home support will become, and the Villareal players will feed off that.

The pre-match betting odds available at 22bet on this game has Real Madrid as 1.58 favourites for the three points with Villarreal 5.25 and the draw 4.34.

Make sure to bet on Real Madrid v Villarreal with 22Bet!