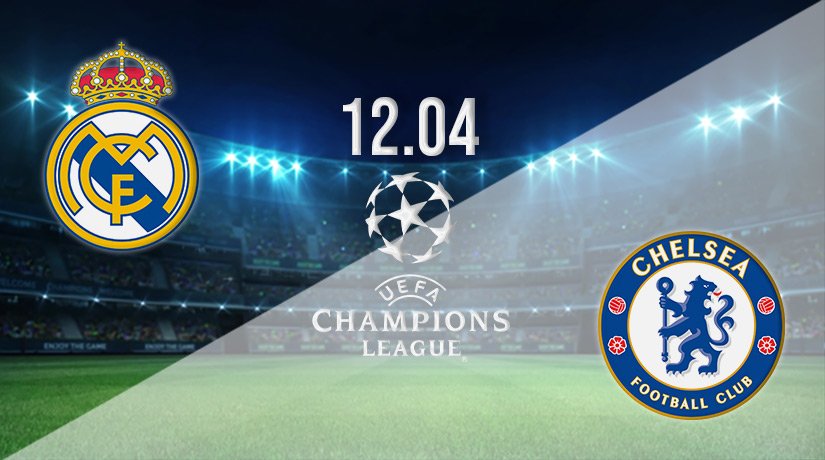 Followers of the UEFA Champions League have an exciting match to look forward to on Tuesday’s schedule with Real Madrid and Chelsea facing off in Spain. The current leaders of La Liga enjoy both a home advantage and an aggregate lead over Chelsea, who are the current keepers of the Champions League trophy. The Blues famously beat fellow Premier League side Manchester City in the final last season, edging a 1-0 win against all the odds. They find themselves up against it having to win in Spain, but the Londoners are game for a fight and travel full of belief.

Madrid eased to a 3-1 win over Chelsea at Stamford Bridge in the first leg, giving Blancos a strong advantage in their quest to make it through to the semi-finals. They will be within touching distance of becoming the champions of European football once again. Madrid enter this match knowing they have one job to do, and that’s to avoid defeat by two or more goals. As there is no away goal rule in play this season, a two-goal win for Chelsea puts the match into extra time while a three or more goal win sends them through. Nothing has been decided yet.

When flicking through the stats associated with this fixture, we note these teams have met six times previously, with Chelsea bagging three wins against two draws and that one victory for Real Madrid recorded last time. Having finally claimed a win in this fixture, will we see Blancos double up to finish the job in style, or will the Blues make life difficult for their hosts by securing a fourth victory in this fixture? That remains to be seen, but there’s no doubt we’ll have great fun finding out on Tuesday.

Madrid are in control

Real Madrid are in complete control of this fixture with a 3-1 aggregate lead and the second leg being played in Spain. Blancos were written off as an outsider to win this competition back in the summer, but they have worked through the various rounds without ever hitting top gear. There’s a feeling there’s plenty more to come from the Spaniards this season, and they flexed their muscles with a stunning show in London. That was a match most expected them to lose or perhaps get a draw from, but very few predicted they would win and so convincingly. The tie isn’t done yet, but Madrid are in a strong position.

They went to Stamford Bridge and laid down a marker, winning the match thanks to goals from Benzema, who rifled home a sublime hat-trick. Those goals came on 21, 24 and 46 minutes to send Madrid clear that night and ensure they took a cushion back to Spain. The hat-trick was incredible, with Benzema reminding everyone watching of his class and skill. He won the match for his team that evening, and it was the quickfire double that really sunk Chelsea. Even when Havertz fired back to make it 2-1, there only ever looked to be one winner on the night, and that was Blancos.

Since beating Chelsea at Stamford Bridge in that quarter-final first leg, Real Madrid have played just once, but they also won that match by two clear goals. That victory came in the form of a 2-0 home win over Getafe on Saturday, the goals scored by Casemiro and Vasquez, showing the strength in depth that Madrid have in their squad. They are now on top of La Liga and hold a dozen-point advantage over the chasing pack led by a recovering Barcelona, who are looking to come back stronger next season.

Chelsea are the current European champions but know they have a fight on their hands if they are to make it two on the bounce and enter the Champions League history books. The Blues knew that their best chance of going through to the semi-finals was winning at home in the first leg, but they could have no complaints about the result. Madrid were the better team in London, and Benzema stood head and shoulders above the others of the field of play. It was a sore one for Chelsea fans to take, but the players must dust themselves off and come again.

The visitors make this trip on the back of a decent run of form in the English Premier League, and they have climbed to third place in the table, behind Manchester City and Liverpool, who will battle it out for the crown. Chelsea have four wins and a defeat from their last five games, sit eight points clear of Arsenal in fifth place, meaning their Champions League slot for next season looks to be safe. That allows them to fully concentrate on overturning the deficit in this match. Winning in Madrid is never easy. Needing to win by two or more goals is close to impossible.

We last saw Chelsea in action on Saturday afternoon in the English Premier League when they hammered Southampton 6-0 at St Mary’s Stadium. That was a timely win and a boost for the confidence that comes at exactly the right time for the squad as they prepare to jet to Spain for this season-defining match. All the pressure is on the away team here, meaning the players must stand up and be counted when this match gets underway.

The scene is set for a cracking match here, with both teams winning at the weekend, allowing them to rest players and focus on this match. A capacity crowd will back Madrid, and that could be enough to see them protect that 3-1 aggregate lead. If they score the first goal of this game, they will be on easy street, but if they concede the first goal and it comes early enough, the home support will begin to get nervous.

Chelsea can’t afford to play it safe here. They will want to keep things tight at the back but know they must go on the attack and take the game to their hosts. The damage was done in the first leg, but this tie isn’t over yet.

Make sure to bet on Real Madrid v Chelsea with 22Bet!