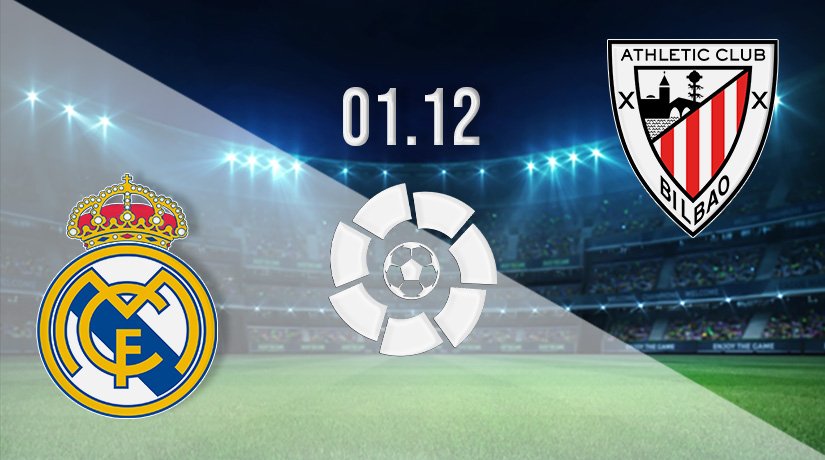 There’s a midweek treat for followers of the Spanish La Liga with a game of note scheduled for Wednesday evening. Real Madrid takes on Athletic Bilbao from 20:00 GMT and you can follow this match live on television.

It promises to be a dramatic affair as the home team aim to land the win and three points needed to enhance their chances of winning back the La Liga title from last season’s champions Atletico Madrid. To have any chance of achieving that, Blancos must make their home advantage count.

The home team were last seen in action on Sunday evening in the highlight of the weekend’s programme when entertaining Sevilla. That was a game that kept armchair fans glued to the action throughout and those planning to tune in to this game will hope for more of the same on Wednesday.

Will Real Madrid take a step closer to winning the league or will Athletic Bilbao pull off an upset and help the title race take another turn.

Real Madrid did the double over Athletic Bilbao last season in La Liga, claiming three points at home and on the road. Both wins came without encountering too much resistance with Madrid winning 3-1 at this venue in December before claiming a 1-0 earlier this year.

Madrid aims to continue their winning ways and strong form with another three points but to do that they must defeat a Bilbao side that is in town to pull off a shock.

Real Madrid surrendered the La Liga title that had worked so hard to win back in spring with derby rivals Atletico Madrid ending as winners. That was a result that shocked football fans across Europe but Atletico were fully deserving of their trophy and supporters hoped that would kickstart a new era in La Liga.

Atletico lost a few of their best players in the off-season while Real Madrid strengthened and with Barcelona’s off-field problems, Blancos were an obvious choice to win the league.

They have started in the right manner, speeding to the front of the queue and will take some budging now that they are in pole position. Real are fighting on two fronts, competing in the La Liga and Champions League, as is the norm for them, but they are holding their own in both competitions.

They hammered Granada 4-1 away from home in La Liga recently and also racked up impressive league wins over Rayo Vallecano and Elche.

In the UEFA Champions League, Real Madrid have hit top speed, beating Shakhtar Donetsk 2-1 in Spain then Sheriff Tiraspol 3-0 on their travels. Despite those strong wins, Real struggled at the weekend and fell behind against nearest league rivals Sevilla inside 12 minutes on Sunday.

Mir had the ball in the net early for the underdogs, reminding La Liga fans that Real Madrid may be the strongest team on paper at this level but they are not yet the finished article. There’s still plenty of work to be done.

Bilbao have drawn four of five

Athletic Bilbao are a team known for contesting the European places. Qualifying for the Champions League is always a long shot but they have the players, finance and support to push hard for a spot in the Europa League or even the newly formed Europa Conference League.

Bilbao is on track to achieve that this season and are expected to be in the mix for European qualification come the end of the season if they can continue their decent form. There’s still a lot of football ahead of us, but Bilbao fear no opponent at this level and have caused more than their fair share of upsets in the past.

If Bilbao are to improve on their current position of eighth in the league and move towards the top six, they must learn to be more ruthless and finish teams off. The visitors are difficult to beat, setting themselves up as a tough nut to crack on the road and a team that’s near impossible to break down when playing the bigger three or four sides from the league at their ground.

That shows in their recent form, with Bilbao drawing four of their last five games, including each of their two most recent outings. They did lose the spare but quickly got back on track, and the players must be admired for that.

It’s an understandable tactic for a team like Athletic Bilbao with their budget. They don’t lose too many matches and haven’t this season, suffering a defeat in only two of their first 14. That is fewer losses than Barcelona and three of the seven teams above them in the league.

It’s also a dangerous tactic as Bilbao’s willingness to keep it tight and defend often means they are reluctant to get up the field, create chances and score goals. Bilbao have scored 13 goals so far, which is the same number as Levante, who are bottom of the league.

Real Madrid were involved in a slog against Sevilla on Sunday, and the coaching staff may be forced to freshen things up a little here. It has already been a long season for the players, and we may see signs of that later this month as the games come thick and fast.

If Real Madrid are at their best, they should be good enough for the home win, cheered on by a support that fancies them to win the league this season.

Athletic Bilbao will see some of their recent draws as two points dropped, and the team knows they must start winning, turning one point into three, but it’s likely they’d accept a draw here.

Athletic Bilbao would view a share of the spoils away to Real Madrid as a great return, but they’ll be made to work hard for anything that comes their way on Wednesday.

22bet members enjoy pre-match betting odds on the best La Liga games, including this fixture. Real Madrid are 1.45 to win with Athletic Bilbao 6.75 and the draw 4.62.

Make sure to bet on Real Madrid v Athletic Bilbao with 22Bet!