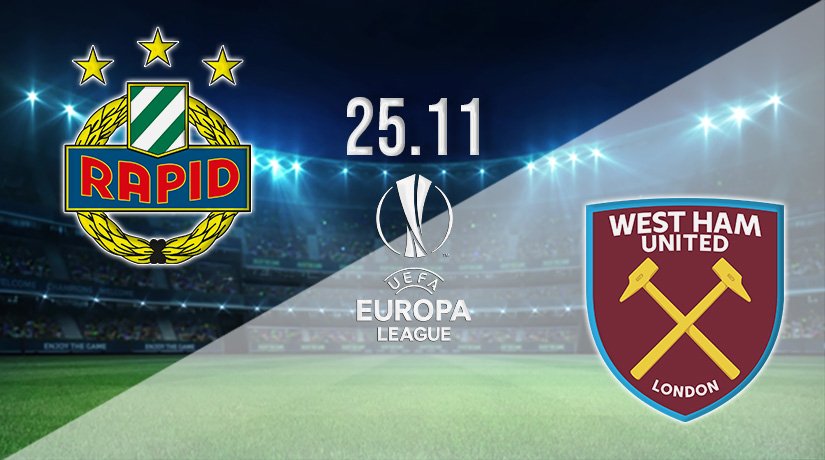 Rapid Vienna, at the bottom of Group H with 3 points, will host table-topping West Ham (with 10 points) in Austria on Thursday at 18:45 GMT.

West Ham, who have already qualified for the next round, will be looking to seal the top spot in the group with a victory over Rapid Vienna.

Propping the bottom of the table, Rapid Vienna still has a mathematical chance of qualifying with the two rounds of fixtures remaining in the group, but its return of one win and three losses from the last four outings does not inspire confidence.

Can Rapid Vienna Cause an Upset Against West Ham?

When the two sides met in London on matchday 2, the English side were comfortable 2-0 winners. A loss to the side at the bottom of Group H will be somewhat of a shock at this point.

This run of form has been replicated in the Austrian Bundesliga, where Rapid Vienna sit 5th with 19 points after 15 rounds of fixtures, and 20 points behind league leaders RB Salzburg.

Can West Ham Get Back to Winning Ways?

In their last outing, West Ham stumbled to a 1-0 defeat to Bruno Lage’s Wolves at Molineux.

David Moyes’ side could not parlay their good form before the international break that saw them inflict the first defeat of the season to Liverpool.

However, the Hammers will be looking to get back on track when they face Rapid Vienna on Thursday.

Dietmar Kühbauer’s side have won two, drawn two and lost one out of their last five outings in the Austrian Bundesliga.

Out of the title race and out of the European places, Rapid Vienna’s season has not met expectations.

In Europe, they have had a disappointing campaign so far, collecting one win and three defeats from the first four rounds of fixtures.

After the 1-0 loss to Wolves, West Ham sit 4th on the English Premier League table, three points ahead of Arsenal in 5th.

That reverse was the first in a run of five straight victories in the league for David Moyes’ side.

In Europe, the Hammers sit at the top of Group H with 10 points, four ahead of second-placed Dinamo Zagreb.

Others include Kevim Wimmer (groin injury) and Maximilian Hofmann (tested positive for COVID-19).

These absences have had their toll on performances and consistency of Dietmar Kühbauer’s side this season.

David Moyes will be without key defender Angelo Ogbonna, who has been ruled out for the rest of the season with a ruptured cruciate ligament.

The rest of the squad is fit and available for selection in the match against Rapid Wien on Thursday.

If Dietmar Kühbauer’s side are to take anything from the fixture against West Ham, they will need their forward Ercan Kara to be in inspired form.

Kara provides the forward outlet for Rapid, can run in behind, and offers the crucial goal threat.

Given Rapid Vienna will be put under pressure by West Ham for most of the match, the role talismanic Kara plays will be pivotal in shaping the performance of the entire team in this fixture.

This season, West Ham’s performances have been built on solidity at the back, a hard-working midfield, and creative forwards.

Benrahma is one of the creative sparks available to David Moyes, and he has been crucial with goals, assists, and opening up play with his dribbling and runs.

He will be a major attraction in the match against Rapid Vienna as David Moyes seeks to seal the top spot in Group H.

West Ham will seek to start the game at a high tempo. Expect David Moyes’ side to press high and seek to boss possession.

The quality and form of West Ham will be too much for Rapid Vienna; David Moyes’ side will walk away with three points from matchday 5.

Make sure to bet on Rapid Vienna vs West Ham with 22Bet!