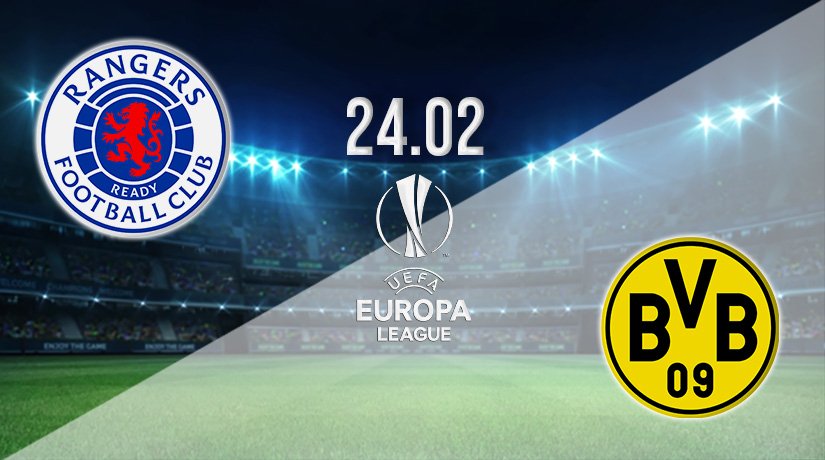 After pulling off one of the most shocking results of the round-of-32 in the first leg winning 4-2 at the Signal Iduna, Rangers will welcome Borussia Dortmund to the Ibrox Stadium on Thursday in the second leg of their Europa League fixture at 21:00 GMT.

Can Rangers Complete the Job?

Going into last week’s tie between Borussia Dortmund and Rangers, the German side were the overwhelming favourites to win the leg and the tie.

Rangers pulled a shock result with an impressive 4-2 win over Dortmund, which gives them a healthy lead ahead of the second leg at the Ibrox Stadium.

Giovanni van Bronckhorst’s side will face a conundrum heading into this match. Do they maintain the approach from the first leg that worked a treat or do they teak their approach to reflect their healthy lead in the tie?

Whatever Giovanni van Bronckhorst chooses, Rangers will expect a difficult match from Dortmund.

Can Borussia Dortmund Use Their Class to Mount a Comeback in Scotland?

Marco Rose’s side will be looking to have a perfect match to stand a chance of overturning the first leg 2-4 defeat.

It is widely accepted in the football community that Dortmund have the better quality Squad and individual talent. However, Rangers outworked them in the first leg, and Rose will expect his side to turn the tables at the Ibrox Stadium.

They will need to bring their best form to the match they are already trailing 2-4, and coming up against a side that has been buoyed by their first leg win and the home crowd.

Rangers have been in stop-start form in recent matches. In the last six Scottish Premiership outings, they have won three, drawn two and lost one. The one loss was a comprehensive 3-0 reverse against Celtic.

In their latest outing against Dundee United, Giovanni van Bronckhorst’s side dropped points with a 1-1 draw. They are now three points behind league leaders Celtic on the table.

The first leg 2-4 win in Germany highlights Rangers’ strengths and weaknesses. Although they scored four goals, they conceded two, which crystallises the challenge they face heading into the second leg.

Domestically, Dortmund have been in very good form. In their last six Bundesliga outings, Dortmund have won five and lost one. They have collected 15 points and dropped 3 in this run.

Dortmund are currently six points behind league leaders Bayern Munich on the table.

However, Marco Rose’s side have shown considerable inconsistencies this season, including in the 2-4 demolition by Rangers in the first leg.

This shows that they have a weakness that opponents can exploit. Rangers did this in the first leg of their round-of-32 fixture. Marco Rose will be working to change this dynamic.

Giovanni van Bronckhorst will be without central midfielder Nnamdi Ofoborh who is side-lined because of a heart condition from July 16th 2021.

Dortmund are also likely to be without their talismanic striker Erling Haaland as he recovers from fitness issues.

Abdoulaye Kamara (ankle), Thomas Meunier (knock), and Dan-Axel Zagadou (muscle), will also be missing from the squad that faces Rangers on Thursday.

The Colombian striker was instrumental in the first leg, scoring a goal in the 41st minute to put Rangers on their way to a famous win.

Morelos will be instrumental for Rangers in the return leg as they seek to complete the job.

The Englishman will be crucial for Dortmund as they will look to dominate the midfield area.

Bellingham will provide the right intensity, energy, and skills to dominate the midfield while releasing attacking players to cause problems for the Rangers defence.

Expect Dortmund to play on the front foot, dominate possession and pin Rangers back.

Rangers will focus on being disciplined and not giving anything away. They will pose a danger through transitions.

Rangers will win this match and complete their progression to the Europa League round of 16.

Make sure to bet on Rangers vs Borussia Dortmund with 22Bet!