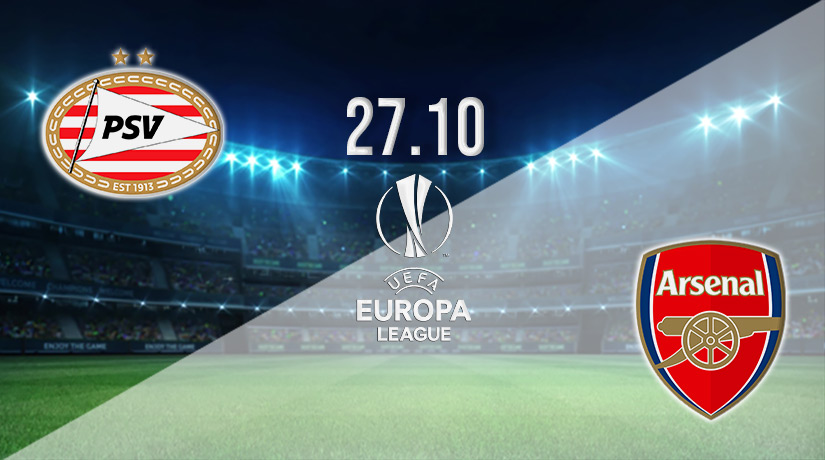 Having sealed qualification from Group A with four wins out of four, Arsenal will be looking to extend their 100% record in this season’s Europa League when they travel to the Philips Stadion to face PSV on Thursday at 17:45 GMT.

PSV will be looking to book their qualification with a win against Arsenal, whereas Arsenal are expected to rotate the squad even as they look to seal the top spot in Group A.

Can Arsenal Seal Top Spot in Group A by Avoiding Defeat against PSV?

Mikel Arteta’s side will be looking to confirm their position at the top of Group A when they face PSV on Thursday. The Premier League leaders will look to rotate a few players for freshness but the focus will be on winning away from home.

Arteta will expect his charges to maintain the intensity and tempo that they have shown throughout this season, to bolster their chances of advancing from the group stage.

The Gunners will focus on moving on from the weekend’s 1-1 draw away to Southampton that saw them drop two points.

Can PSV Get the Win they need to Seal Qualification from Group A?

Ruud van Nistelrooy and his charges need a win to make their qualification from Group A as runners-up safe. They will play with positivity and ambition targeting a win against the Gunners.

PSV will be looking to move on swiftly from the weekend defeat away to Groningen, which ended in a 4-2 reverse. Nistelrooy will hope that his players will be motivated and up for the fight when they face Arsenal on Thursday.

The focus of the Dutch side will be on dealing with the intensity and pace that Arsenal will offer. This way, they will need to take the sting out of the match and control the tempo of the match through possession.

Nistelrooy’s men have won eight times and lost three times in their 11 fixtures this term in the Eredivisie. They have scored 37 times while conceding 18 times and have hauled 24 points in the process. They currently sit second on the log, 4 points behind leaders Ajax.

In their Europa League campaign, Nistelrooy’s charges have won two times, drawn once, and lost once. They have scored 11 times while conceding 3 goals; they have hauled 7 points, 5 behind leaders Arsenal.

PSV will be looking to bounce back to winning ways when they clash with Arsenal on Thursday and thus get their qualification process back on track.

Arteta’s men have started the season very well. The Gunners have won 9 matches, drawn once, and lost one, in their opening 11 this term.

They have scored 25 goals while conceding 11; they have hauled 28 points and currently sit at the top of the league, 2 points clear of second-placed Man City.

In their Europa League run, Arteta’s men have won all four fixtures they have been engaged in. They have scored 7 times and conceded just once in this run; they have hauled 12 points out of the available 12.

Gakpo is leading the Dutch Eredivisie scoring charts so far this season with 9 goals; he is also leading the assists charts with nine, in 11 appearances for PSV.

The tricky forward is instrumental to PSV’s attacking play. He provides the unpredictability, forward thrust, and the Midas touch to create or score goals for the Dutch side.

He will be crucial for PSV when they face Arsenal on Thursday.

The Brazilian has been a revelation this season for Arteta’s men. His 5 goals and 4 assists in 14 appearances for Arsenal underscore his burgeoning importance to the North London side.

The dynamic forward offers a goal threat and creativity from in and around Arsenal’s attack. He dovetails with Arteta’s wide players with his dribbling, passing, and movement.

PSV will look to control the tempo of the match through their patient passing from the back. They will seek to use fast passing to create chances.

Arsenal will press PSV from the get-go. They will put players on the ball under immense pressure.

Arsenal will win the match and seal the top spot in Group A.

Make sure to bet on Union Berlin vs Sporting Braga with 22Bet!