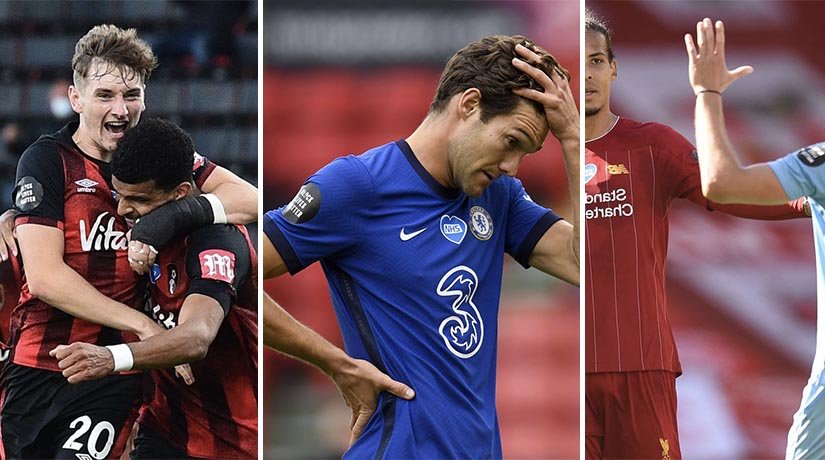 Matchweek 35 has been quite a wild ride for Premier League fans. Burnley squashed Liverpool’s dreams of a perfect home record. Sheffield United beat Chelsea to keep their Europa League dreams alive. At the other end of the table, Bournemouth and Aston Villa punched well above their weight in last-minute efforts to avoid relegation. Southampton scored at the very last moment to earn a tie at Old Trafford stadium. Tottenham and Arsenal duked it out in the North London derby. And Manchester City had a stunning few days both on the football pitch and in the courtroom.

Whose performance impressed you most? 🤔#PL pic.twitter.com/wV9uf4yWnh

Jürgen Klopp’s squad walked onto the pitch fully expecting to leave it one step closer to a historic 100% Premier League home record. And, for a long time, it looked like this would be the case. Liverpool possessed the ball 3 times as long as their opponents and made nearly 5 times as many shots on target. The game looked in the bag for Klopp’s team when Andrew Robertson scored a goal on the 34th minute.

But Burnley wasn’t planning on going down easily. With a combination of Nick Pope’s Champions League level goalkeeping and striker Jay Rodriguez’s 69th-minute goal, Sean Dyche’s side were able to claw out a tie against this year’s Premier League champions.

REACTION: Pope: It's Nice To Help Out! https://t.co/6efQZ6Snpo

Despite having only 26% possession of the ball and being less disciplined, Sheffield United managed to give third-place Chelsea a real thrashing at Bramall Lane on Saturday. David McGoldrick opened up the score on the 18th minute. His teammate Oli McBurnie doubled Sheffield’s lead just 15 minutes later. And on the 77th minute, David McGoldrick buried all of Chelsea’s chances of getting a draw by scoring his second goal.

An incredible performance and result 🙌

Go behind the scenes & get a unique pitchside view of our 3-0 win over Chelsea.

Sheffield now find themselves just one point behind the Wolves and a spot in next year’s Europa League. Their opponents for the remaining three matches are Leicester (4th), Everton (11th), and Southampton (12th).

In what is undoubtedly the Cinderella story of this matchweek, Bournemouth demolished Champions League hopefuls Leicester City 4 – 1 at Dean Court. The Foxes were leading 0 – 1 when, as a result of overly aggressive play, Leicester’s Çağlar Söyüncü was given a red card and Bournemouth was awarded a penalty. Junior Stanislas scored on the penalty to make it 1-1 on the 66th minute of the match. Just a few seconds later, Bournemouth’s Dominic Solanke made it 2-1.

Leicester City’s Jonny Evans found the net on the 83rd minute. Unfortunately for the Foxes, it was the wrong net. Four minutes later, Dominic Solanke’s ball found the same goal post to make it 4 – 1. Bournemouth now find themselves in 18th with three points separating them from Watford and safety.

In a similar fashion, 19th-place Aston Villa made a statement by beating Crystal Palace 2 – 0 at Villa Park. The Lions’ Trézéguet is the undisputed hero of the match. He found the net on the 4th minute of stoppage time at the end of the first half and then repeated his success on the 59th minute of the game.

"We knew how big this one was. We couldn't have taken anything less than three points." – @JackGrealish 💬#AVFC

Aston Villa now find themselves one point behind Bournemouth and four points behind Watford. Avoiding relegation will be a miracle for the Villa, however, as their remaining matches are against Everton (11th), Arsenal (9th), and West Ham United (16th).

Southampton Claw Their Way to a Draw at Old Trafford

As we predicted, Manchester United vs Southampton was a very close game. The home team arrived at Old Trafford stadium as the favorites, but a 12th-minute goal by Southampton’s Stuart Armstrong reminded everyone that the Saints aren’t a club that gives up easily. Man United responded to the provocation by scoring two goals of their own, one by Rashford on the 20th and another by Martial just three minutes later.

And those were the only three goals scored in regulation. Southampton refused to admit defeat, however, and continued to pile up the pressure. Their efforts paid off on the 6th minute of stoppage time when Obafemi found the net. Manchester City now find themselves at fifth with the same amount of points as fourth-ranked Leicester City. They will want to step it up in these last couple of matchweeks if they want to play Champions League football next year.

This weekend’s North London derby was a joy for the eyes. The teams fought neck and neck throughout the game. The Gunners’ Alexandre Lacazette opened up the score on the 16th minute. Just three minutes later, Tottenham’s Son Heung-min equalized the score. From then on Tottenham continued putting the pressure on Arsenal’s defense, an effort that culminated in a Toby Alderweireld goal on the 81st minute.

Man City Dominates in and off the Field.

The last few days were a real treat for Man City fans. On the football pitch, they dominated Newcastle five-nil in Matchweek 34 and gave the same treatment to Brighton this Saturday.

But it wasn’t the club’s players that guaranteed them entry into next year’s Champions League. Their lawyers did that. On Monday, July 13, the Court of Appeals for Sport overturned UEFA’s earlier decision that banned Man City from playing in the Champions League for 2 years. So get ready to see City duke it out against Europe’s elite.

Manchester City's two-year European ban has been overturned by CAS

We’ll see you soon with our next Premier League recap and highlights. Be sure to use 22Bet for all your bookmaking needs!