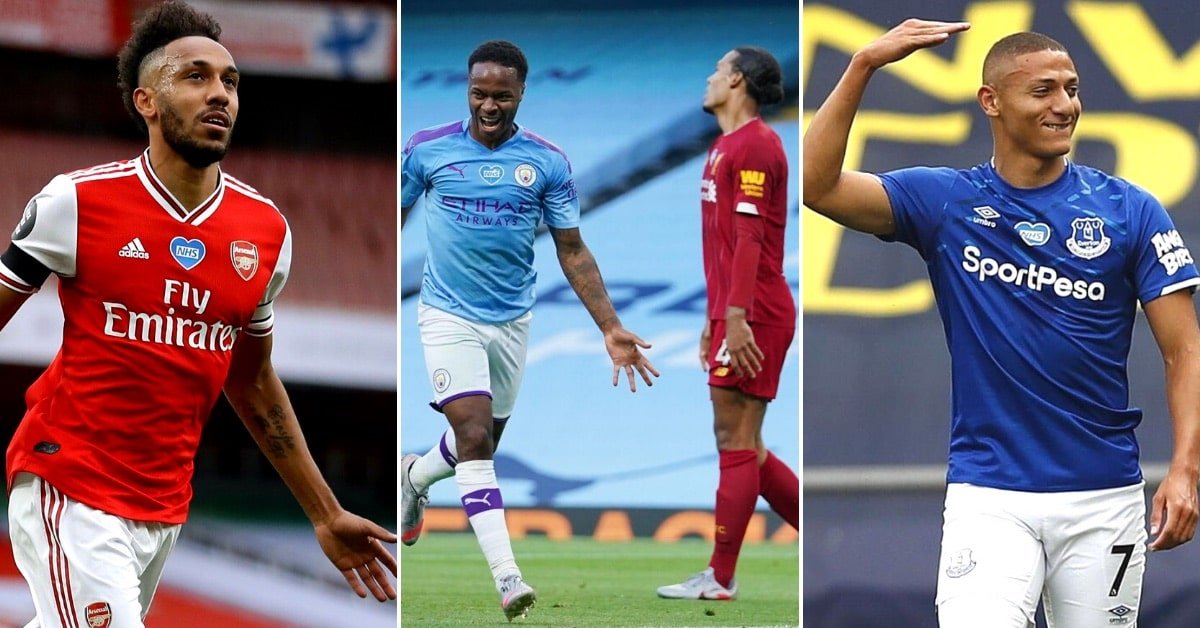 This matchweek saw VAR drama, shock victories, and stunning goals, but most of all, it saw history being made as we witnessed Liverpool walk out on the pitch under a guard of honor for the first time in 30 years! Congratulations, lads. Take a bow. (Well, maybe not so much after your abysmal display against Manchester City, but still…)

It was time for the Clash of Champions as Liverpool traveled to the Etihad for their first Premier League match since they secured the title of 2019/20 when Chelsea beat last year’s winners, Man City. Our prediction backed Liverpool, but the hosts shocked the reigning champions with three goals in the first half. Kevin de Bruyne netted a (haphazard-and-slightly-ball-grabbing?!) penalty, Raheem Sterling struck a close-range shot that hit the post and Phil Foden scored a tiki-taka-ish stunner just before half-time) – leaving the Red looking frustrated on their first Premier League clash as champions.

Liverpool tried to navigate some sort of response in the second half, which kicked off with an unfortunate (for them) three shots on target by Man City. The visitors struggled to find the killer instinct that dominated their play for the most part of this season until Alex Oxlade-Chamberlain scored an own goal to make it an agonizing 4 – 0 by the 65th minute.

4 – Liverpool find themselves four goals down in a Premier League game for the first time since September 2017, which was also against Manchester City at the Etihad Stadium (5-0 defeat). Flustered. #MCILIV pic.twitter.com/H4lU7lfcBc

Liverpool still win the league and will lift the trophy on the last home match of the season (against Chelsea), whilst last season’s reigning Champions, Manchester City come out of this match with a brutal win over Jurgen Klopp’s men, and sit second on the table with 66 points.

As per our prediction, Arsenal recorded a third consecutive win in the Premier League after thrashing last-place Norwich four goals to nil at the Emirates on Wednesday evening.

Superb Pierre-Emerick Aubameyang had a fantastic match and scored two goals to become the fastest Arsenal player to reach 50 goals for the club (79 games).

Granit Xhaka netted a brilliant strike from an Aubameyang assist, but the star of the show was newcomer Cedric Soares, who made his Arsenal debut and scored just 229 seconds after coming on with a left-footed stunner from outside the box.

229 – It took Cedric Soares 229 seconds to score as many Premier League goals for @Arsenal as he did in 120 appearances for Southampton (10,090 minutes). Impression. pic.twitter.com/PxaTd48aKr

Since losing to Chelsea in Mikel Arteta’s first game in charge at the Emirates, Arsenal have won five of their last six Premier League games at home, including winning four in a row for the first time since April 2019. The Gunners have now climbed to the seventh spot in the Premier League table with 46 points, whilst Norwich City sit last and relegation seems imminent for The Canaries at this point.

London Stadium hosted a five-goal thriller on Wednesday night as Chelsea lost to West Ham United in what was a crucial battle for both sides. The game had everything, from the standard VAR drama (disallowed goal for West Ham) to the brilliant strikes, terrible goalkeeping, and a late winner!

David Moyes’ men were desperately hoping for points to get as far away from the bottom three as possible, whilst Frank Lampard’s team was almost certain that they will leapfrog Leicester City and reach third spot on the Premier League table.

12 – Willian is the first player to score a Premier League goal in every month of the year. Diarise. pic.twitter.com/aWxV1Cd9tW

The Hammers scored in all three of their shots on target in this match of cat and mouse. Willian opened up the scoresheet with a penalty in the 42nd minute and Tomas Soucek responded in extra time of the first half. West Ham star Michail Antonio gave the hosts a 2-1 lead just minutes into the second half and Willian equalized with a fantastic free-kick that will go down in the books as one of the best this season.

Willian is the first player to score a penalty and a direct free-kick goal in the same Premier League match since Cesc Fabregas did so for Chelsea against West Ham in March 2016.

29/29 – All 29 of Michail Antonio's Premier League goals have been scored from inside the box; among current PL players, only Gabriel Jesus has a larger 100% record (37/37). Territory. pic.twitter.com/EcBnAo3PBQ

Then Andriy Yarmolenko came off the bench and scored an injury-time winner, thanks to a gorgeous Antonio assist, boosting West Ham’s Premier League survival bid.

24 – Neymar (28) is the only Brazilian with more goals than Richarlison (24) in the top five European leagues since the start of last season. Flair. https://t.co/TEI1PDOQ9L

Leicester had some great chances at the start of the second half and managed to score an amusing goal when Mason Holgate’s clearance bounced off Kelechi Iheanacho’s face and found the back of the net.

Everton ruined Leicester City’s chances to secure their third spot and now sit 11th with 44 points, whilst Brendan Rodgers’ men are third with 55 points, just one ahead of Chelsea.

Manchester United crushed Brighton 0 – 3 with goals by Mason Greenwood and an impressive brace by Bruno Fernandes. Newcastle thrashed relegation-threatened Bournemouth 1 – 4, whilst Sheffield United shocked visitors-Tottenham 3 – 1 in a thriller clash that put Spurs in eighth place with 45 points, and the hosts in 10th with 44 points.

Six more to go! See you next Monday for the round-up and highlights of Matchweek 33. Make sure to bet with 22Bet!