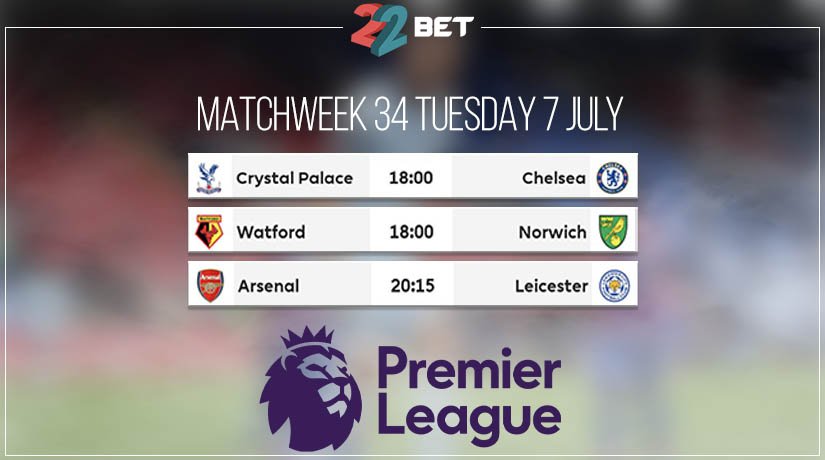 Tuesday was an eventful day for Premier League fans. Six teams took to the pitch. Fans were treated to a shootout at Selhurst Park, a close duel between two bottom table teams, and an Arsenal draw that frustrated manager Mikel Arteta just as much as it frustrated the team’s fans.

The day started with a bang. Just as we predicted earlier, Champions League-bound Chelsea defeated mid-table Crystal Palace. What no one could have predicted was that the match would produce five goals and have fans of both teams on the edge of their seats until the final whistle.

Things started off perfectly for Chelsea. The Blues began the game with a confident close-range goal by Willian on the 6th minute. Twenty-one minutes later, Christian Pulisic doubled the team’s lead.

6 – Willian has had a direct hand in a Chelsea goal in four consecutive Premier League games for the very first time (4 goals, 2 assists) whilst since the restart of the competition in mid-June, no player has been involved in more goals than the Brazilian (6). Services. #CRYCHE pic.twitter.com/t439utiyw6

But Crystal Palace wasn’t about to give up without a fight. Wilfried Zaha made that clear when he scored a brilliant goal from 23 meters on the 34th minute. The score remained 1-2 until halftime.

What a strike! Zaha powers the ball in from 25-yards.#CRYCHE

Tammy Abraham restored Chelsea’s two-goal advantage on the 71st minute of the match. And one could literally feel Chelsea fans starting to breathe a sigh of relief at home.

But that relief would only last just over a minute as Benteke scored on a Van Aanholt pass, reducing Chelsea’s advantage back to just one goal.

There were just 8️⃣2️⃣ seconds between the goals scored by Abraham and Benteke#CRYCHE pic.twitter.com/nmhoCnKXqa

Unfortunately for the supporters of the Eagles, that would be the last time the scoreboard changed during the match. Chelsea returned home from Selhurst Park with a 2 – 3 win and 3 points in their pockets. The Blues now sit at third in the Premier League.

Chelsea win an entertaining encounter at Selhurst Park to move into third. For now.#CRYCHE pic.twitter.com/OCyZq4lvEv

It was easy to have low expectations of the day’s second game, in which near-relegation Watford met Premier League whipping boys Norwich City. But those who ended up watching the match were pleasantly surprised.

The teams didn’t waste too much time on pleasantries. Norwich’s Emi Buendia scored on the fourth minute of the match, sending a clear message that his team would not give up easily.

Hernandez cuts in from the left and plays it to Buendia on the right, who shifts onto his left foot and picks out the top left corner! Get in!#WATNOR 0-1 (5)

Norwich City supporters didn’t get to celebrate for long, however. Just six minutes later, Watford’s Craig Dawson equalized the score. The teams went into half time with 1-1 on the scoreboard.

Dawson meets Capoue's free kick and nods in at the far post!

On the 56th minute, Danny Welbeck put Watford ahead with a beautiful and acrobatic goal that is sure to grace highlight reels everywhere. This is the first goal the former Arsenal and Manchester United player scored for the team.

No one had anything to add after that and the game ended 2-1. The 3 points earned by Watford put them 4 points ahead of the relegation zone. Norwich City find themselves dead last in the table and, barring a miracle, will be heading back to the Championship next season.

A huge win for Watford who go four points clear of the relegation zone#WATNOR pic.twitter.com/krwEhrLqNv

As we predicted, the Arsenal – Leicester City game ended in a draw. But it wasn’t the kind of draw anyone could have imagined.

22 – @Arsenal are unbeaten in 22 home league games against Leicester (W19 D3), winning each of the last 12 in a row. Hunters. #ARSLEI pic.twitter.com/oLxADxEtRP

Arsenal started off strong. Pierre-Emerick Aubameyang scored his 20th Premier League goal on the 21st minute of the game. That goal helped him make history as the second Arsenal player to score 20 EPL goals in two consecutive seasons.

Despite having multiple chances, the Gunners struggled to score again and, as coach Mikel Arteta put it, “kill off” their opponent. Things took a turn for the worst for Arsenal on the 75th minute, when Eddie Nketiah was given a red card following a VAR decision. Just nine minutes later, Leicester’s Jamie Vardy scored a late equalizer.

21 – Eddie Nketiah (21y 38d) is the youngest Arsenal player to receive a Premier League red card since Konstantinos Mavropanos (20y 149d) was also sent off against Leicester back in May 2018. Screen-time. #ARSLEI pic.twitter.com/N6HvEC2Mkn

The game ended in a 1-1 draw, with both teams getting one point. This result is by no means what Arsenal fans were hoping for at Emirates Stadium. The team now finds itself five points below Manchester United and a Champions League spot. Leicester City’s spot in that competition, on the other hand, is all but guaranteed.

We pushed hard for a winner, but it's a point for the Foxes.#ArsLei

We’ll see you soon with our next Premier League round-up and highlights. Be sure to use 22Bet for all your bookmaking needs!