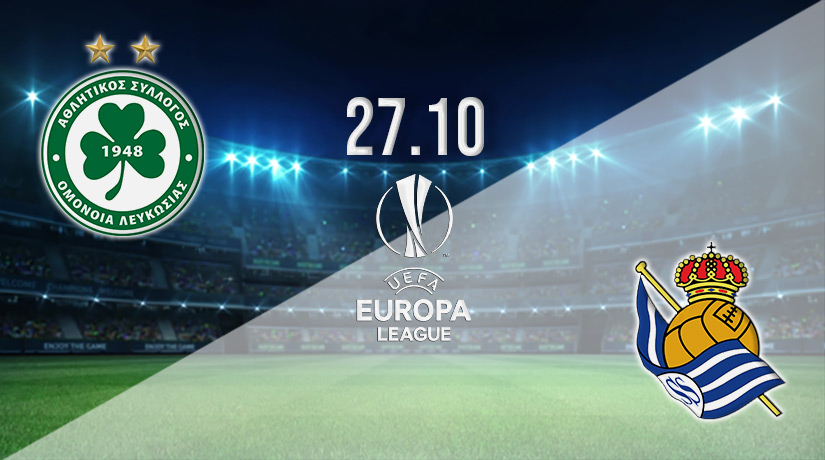 Group E leaders Real Sociedad will look to seal top spot in the group when they travel to the Tsirion Athlitiko Kento Stadium to face Omonoia, who are winless and prop the Group E table, on Thursday at 20:00 GMT.

Omonoia will be looking to get the first win of their Europa League group stage campaign, whereas Sociedad will look to maintain their 100% record in the competition so far this term.

Can Omonoia Get their First Win or their First Points of the Europa League Group Stage this Term?

Omonoia have lost all four matches in Group E this term. They sit bottom of the group with zero points and a negative-six goal difference. They will be looking to make their mark in the group with two matches remaining.

The focus will be on being defensively solid. Having conceded nine goals so far, the team will look to defend deep and aggressively to deny Sociedad any space and penetration they need to create chances.

They will also need to be brave in their possession to relieve pressure from the defending players. Possession of the ball will also allow them to pose an attacking threat in the final third.

Can Real Sociedad Retain their 100% Winning Record in the Europa League with a Win?

The La Liga side have had a brilliant campaign in Group E, scooping all 12 points available in their opening four fixtures. They will be looking to extend this record when they face a side that has lost all their fixtures this season in the group stage.

Imanol Alguacil and his charges will guard against any complacency when they face Omonoia. Alguacil will expect his players to show their opponents respect and makes sure that their performance is professional.

The focus will be retaining their intensity and aggression; they will seek to dominate the ball and dictate the tempo of the clash. They will use their vertical passing to create chances and stretch the defence through their wide players.

Omonoia opened their campaign in Group E with a 0-3 loss at home to Sheriff on matchday 1. They were then beaten 2-1 away to Real Sociedad on matchday 2.

They ran Manchester United close on matchday, where they scored three goals but lost the clash because they conceded three times. In this doubleheader, they lost the return leg at Old Trafford 1-0 after they conceded a last-gasp Scott McTominay goal in the 93rd minute.

Omonoia have scored three times and conceded nine times. They have a negative-six goal difference. These statistics highlight their challenge in Europe this term – they do not score enough goals and they conceded too many.

Alguacil’s charges opened their campaign in Group E with a stunning 0-1 win away to Manchester United. This win set the stage for their good run of results in the group that has seen the top of the group with two matches remaining.

Matchday 2 ended in a 2-1 home win over Omonoia before they beat Sheriff twice in a doubleheader. The first leg was a 0-2 win away from home, whereas the second one was a 3-0 win at home to Sheriff.

Real Sociedad have scored 8 goals while conceding just once. They have kept three clean sheets in the process. These figures highlight the team’s defensive resilience and attacking edge.

The midfield battle will be important in the clash with Sociedad. Omonoia will need to control the midfield to stand a chance of taking something from this match.

Cassama will be pivotal in the midfield battle. He will be the anchor that screens the Omonoia defence while also being the base for their attacks.

Mendez is Sociedad’s top-scorer this season so far; he has six goals and three assists in 15 appearances in La Liga.

His cutting edge will be important as Sociedad seek to seal top spot in Group E with one match to spare.

Omonoia will seek to be compact and defend deep against Sociedad. They will rely on counter-attacks and set pieces to pose an attacking threat.

Real Sociedad will dominate the ball; they will use their progressive and vertical passing to create goal-scoring chances.

Real Sociedad will win the match and extent their 100% record.

Make sure to bet on Omonoia vs Real Sociedad with 22Bet!