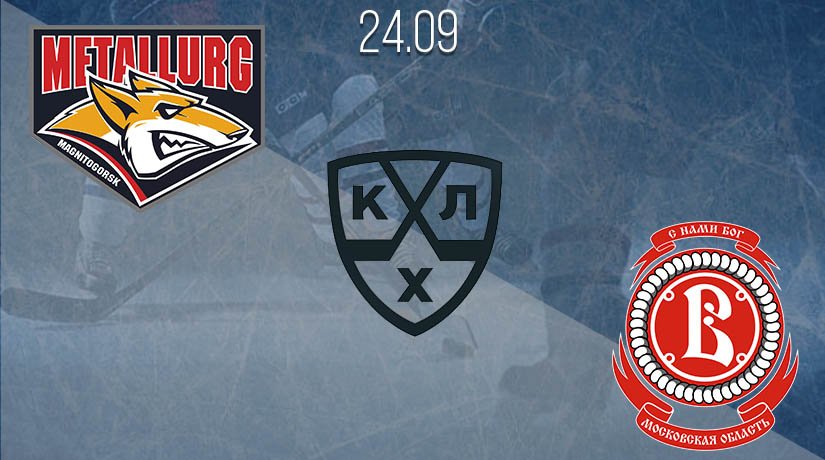 Metallurg Magnitogorsk will play against Vityaz on September 24. Will Metallurg be able to win? Let’s find the answer in our prediction.

Metallurg is in good shape, and, after a crushing defeat to Avangard with a score of 0-4, they developed a series of three victories. The Magnitogorsk team played high-quality hockey on the road. Yes, they experienced difficulties in the confrontation with Sochi, but still proved their superiority in shootouts (1-0), and then dealt with CSKA (4-2).

In the duel with CSKA, the powerplay special team worked great, and thanks to their actions, the Magnitogorsk team scored two goals. We emphasize that all the goals took place in the final period. Thus, Ilya Vorobyov’s squad is now one of the best teams in the Eastern Conference and is placed in the fourth position with 12 points.

Vityaz performs very unstably and never ceases to amaze with its results. Mikhail Kravets’ team suffered two defeats in a row from Dinamo Minsk (2- 4) and Traktor (1-3), but on the other hand, they managed to deal with a stronger rival, Avtomobilist (4-3 OT).

Vityaz even had a chance to win in the regulation, as they were leading 3-1, but conceded two goals in a row while killing penalties. Let us emphasize that Kaspars Daugavins brought the victory to the team in overtime. However, it is worth noting that victories, and points in general, are given to Vityaz with incredible difficulty. They concede about three goals in a game.

As a rule, meetings between the teams are not productive in terms of goals and end with a difference of one or two goals. However, now Metallurg is in full swing and is in good spirits after the victory over CSKA, so they can deal with the unstable Vityaz, who are struggling to get points. We suggest making a bet on Metallurg to win within the regulation and on the small match totals.