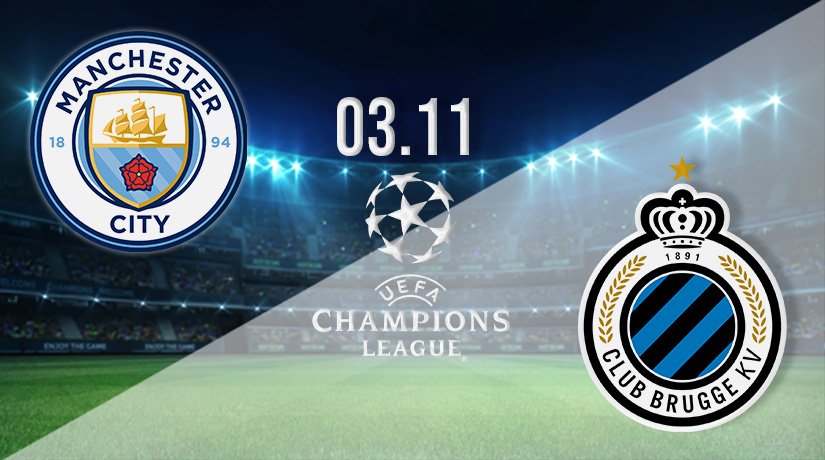 Manchester City will look to bounce back to winning ways at the Etihad Stadium when they host Club Brugge in the Champions League group stage match at 21:00 GMT.

After a surprise 2-0 reverse at home to Crystal Palace, Pep Guardiola will be looking for an immediate reaction from his charges against Club Brugge.

Can Manchester City Bounce Back?

Guardiola’s men rarely slip up domestically or in Europe. The score-line from the weekend fixture against the Eagles must have reverberated across the world.

The Citizens also always bounce back after a setback, which does not bode well for Club Brugge.

After three matches, Manchester City have six points, one less than group leaders PSG, and two points above Club Brugge in third.

Playing at the Etihad means that Manchester City have the perfect platform to not only bounce back from the defeat to Palace but bolster their chances of qualifying for the next stages of the Champions League.

Can Club Brugge Cause Another Upset?

Club Brugge pulled off one of the season’s biggest upsets by drawing with PSG, a team brimming with superstars like Messi, Mbappe, and Neymar.

But having lost to Man City in Belgium, it will take a massive and flawless performance to get something from the Etihad Stadium.

The subplot from the City’s defeat at the weekend is the dismissal of Aymeric Laporte at 0-1, which made it harder for the hosts to mount a comeback and made them vulnerable to a counterattack from Palace, as epitomized by the Connor Gallagher goal that sealed the points for Palace.

Club Brugge conceded 5 goals in the first leg of this fixture, with Cole Palmer, Kyle Walker, Joao Cancelo, and Riyad Mahrez (2) all on the score sheet.

Manchester City had 64% possession in this match and 9 shots on target, which highlighted their dominance of the match overall.

Manchester City exited the Carabao Cup for the first time in five years after losing to West Ham on penalties, after a 0-0 match in London.

The Citizens then followed that exit with a 2-0 defeat in the Premier League to Crystal Palace, as they lost some ground at the top to Chelsea, who emerged with a 3-0 win at Newcastle.

These two matches a three-match winning in all competition.

This shows that Man City have not settled into the season given their high standards and have another gear to go.

They can score loads of goals on their day, as demonstrated in their 5-1 win against Club Brugge in Belgium.

Club Brugge are second in the Belgian Pro League with 26 points, two behind league leaders Union Saint-Gilloise, and two ahead of Antwerp below them in third.

In their last five league matches, Club Brugge have won two and drawn three, with zero losses in this run.

For Pep Guardiola, Ferran Torres is still out with a foot injury, with the return date unknown.

The sending off of Aymeric Laporte at the weekend does not affect his eligibility in the Champions League; however, Guardiola is expected to think ahead as City prepare for the busy schedule after the international break.

Benjamin Mendy continues to be absent from the Man City squad as the criminal investigation involving the player continues.

Club Brugge do not have any significant injuries to their team; this means that the manager has a full complement from which to choose.

De Bruyne is having a weird season so far because he has not been able to hit the high standards that he has set in recent years.

Guardiola admitted as much when he played him in the Carabao Cup match against West Ham. De Bruyne’s form was also summed up when he was substituted in the match against Crystal Palace with the Citizens chasing an equalizer.

Guardiola hopes that he can play his way back to form, but with results such as the one at the weekend, Man City must balance this with the need to win football matches.

This adds up to a tantalizing chance to see the response of a slightly under pressure de Bruyne as he seeks to regain the sharpness and quality that we have come to associate with his play.

Playing in a traditional 4-4-1-1, Club Brugge will rely heavily on their center-back pairing to keep out the Man City onslaught.

This is made even more important by the fact that they conceded 5 goals in the first leg.

The pairing of Hendry and Nsoki will play a crucial role in withstanding the Man City press and start counterattacks to stand a chance of catching the Citizens on the break and doing some damage.

Expect Manchester City to stamp their authority on proceedings early by keeping large swathes of possession, pressing high, and seeking an early breakthrough to ease the nerves at the Etihad Stadium.

Club Brugge will seek to keep the City attack quiet by denying them space, defending narrow, and withstanding the early pressure. They will also seek to break quickly and run in behind the high Man City defensive line.

Man City will have too much for Club Brugge. The Citizens will take all three points as they bounce back from the disappointing defeat at the weekend.

Make sure to bet on Manchester City vs Club Brugge with 22Bet!