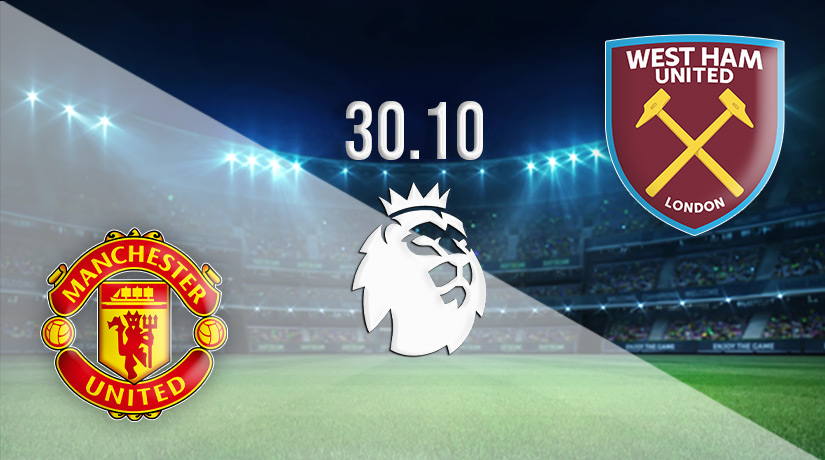 It’s the final round of fixtures of the month from the English Premier League, and with it being Halloween weekend, followers are hoping for a few shocking results and nerve-shredding matches. There are plenty of contenders for game of the day in the EPL, but the one that caught the eye of our expert team of football writers comes from Old Trafford. Manchester United welcomes London club West Ham United for a Sunday 16:15 GMT kick-off.

Both teams head into this contest knowing the value of taking all three points. The Red Devils need the win to keep them on course for a top-four finish. United’s form is improving fast, and they have lifted themselves to the edge of the UEFA Champions League places. A place amongst the league’s best four teams would rank as a sensational achievement for the Man Utd backroom staff in their first season at Old Trafford. But we’re getting ahead our ourselves. There’s an exciting match to get through before predicting where these sides will finish.

The Red Devils and Hammers met three times last season in league and cup action, with Man United winning 2-1 in London before West Ham returned the favour, claiming a 1-0 win at Old Trafford to knock their opponents out of the EFL Cup. With the head-to-head stats stuck at one win each, United won the third and final game thanks to a 1-0 scoreline, the winning goal coming from Marcus Rashford with 90 minutes on the clock. The stats suggest we should prepare for another hard-fought game with neither side willing to back down.

Manchester United fans endured a torrid start to the season, with the team stuck down in the relegation zone after two matches. The players and coaches came under fire early but could hold their own and nudge the campaign back on track. The Red Devils are now one of the form sides of the EPL and are in the mix for the prize places. Can they win the title this season? It would certainly be a big ask for the Red Devils to shit Manchester City after giving them a six-point handicap, but there’s plenty of time left to claw back the deficit.

The hosts started the weekend in sixth place with 20 points claimed from 11 outings. They are eight behind current leaders, Arsenal, with nine wins, one draw and a defeat. To make matters even more interesting, Man Utd remain the only team to beat The Gunners this term, brushing the London team aside at this venue earlier in the season. There’s a swagger about the locals, and faith is returning to the stands. A home win over West Ham is expected, but it won’t come easy. If they do claim the points here, United could catapult themselves into the running for a top-four finish and a shot at the EPL trophy.

We last saw United in Premier League action a week ago when they were held to a draw by Chelsea at Stamford Bridge. That’s the second level finish in three games for the team, with the other being a goalless finish at home to high-flying Newcastle United, who have forced their way into the top four against all expectations. The draw home draw with a determined Magpies wasn’t a great result, but to take a point from Stamford Bridge was a positive, adding confidence to the squad.

West Ham enjoyed a thrilling season last term, the best in living memory. The club, now based in the former London 2012 Olympic Stadium, came agonizingly close to a top-four finish and spot in the Champions League but missed out in the dying games. They were expected to strengthen ahead of a Europa League stint, and the manager brought in fresh blood, but the squad is struggling to match their previous efforts. Improvement is needed, or David Moyes may lose his job, despite the heroics of 2021/22.

You will find West Ham down in 10th, carrying a mixed bag of results. That midtable spot isn’t exactly what Hammers fans had been hoping for, but it’s a great deal better than it was just a few weeks ago. The Londoners were struggling at the wrong end of the ladder, and it looked like they could be dragged into the danger zone following a poor run of results. Everyone connected to the side will thank their lucky stars the players are firing again and seem to be pulling in the same direction, working together for the cause. A win here would win over any remaining doubters, that’s for sure.

West Ham board the team bus for Old Trafford with their season stats showing four wins, two draws and six defeats, scoring 11 goals but conceding 12. That defence can improve, but it’s not the worst. West Ham has allowed a dozen goals, and when you look at the league’s main players, they aren’t too far away. The main problem is the attack, with 11 goals scored fewer than Leeds United, who are third from the bottom of the table and staring at a return to the Championship. The visitors need to start taking their chances.

This is an evenly-matched contest, with both teams confident they have what it takes to win the points. However, Man Utd holds small advantages, which could impact the result. In addition to the home advantage, Man Utd scored five more goals than their opponents, which is worth keeping in mind. Both sides are capable of creating chances. The team with the better attack have a great chance of winning.

Man Utd can be backed at odds of 1.675 if you have a 22bet account. West Ham is 4.76 while the draw is 4.04. There are over 100 other betting options, including both teams to score, handicap, total goals and first goalscorer.

Make sure to bet on Man Utd v West Ham with 22Bet!