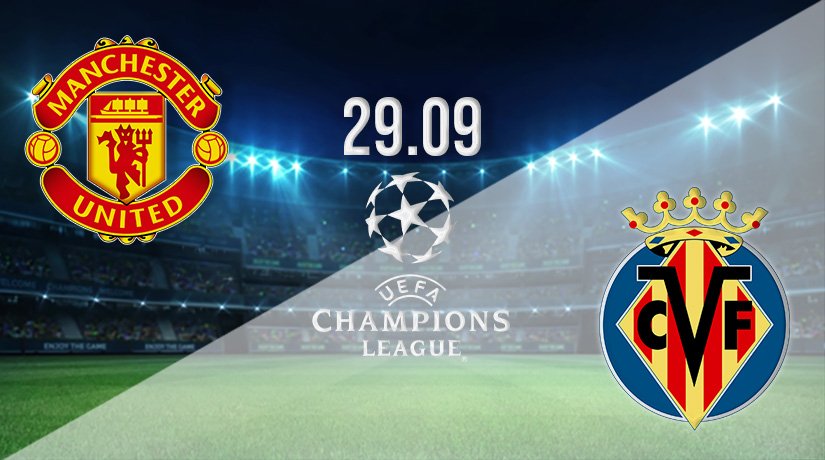 Manchester United make their Old Firm debut in this season’s Champions League group stages when renewing rivalries with Villarreal in pool F. This match is a repeat of last season’s Europa League final which the Spaniards won against all the odds, continuing La Liga’s incredible record in the competition. Man Utd will be out for revenge but having lost their opening match of the campaign they know another defeat could wreck their chances of qualifying for the knockout stages of this competition.

It may only be matchday two but the pressure is already on Ole Gunnar Solskjaer’s team ahead of this match. They are expected to make their home advantage count and secure a win. The points are more important than the performance at this stage as the home players aim to pick up their first win, give their supporters something to cheer after a tough few weeks and propel themselves back into the running for pole position in the group.

The stats attached to this fixture are remarkable with the teams facing off five times previously and producing a draw on each occasion. Digging deeper we note four of those five games were goalless with the spare being that 1-1 finish in the Europa League final back in May. Villarreal took the lead in that game before Man Utd fired back. The Spaniards then won a marathon shootout by a stunning 11-10 score.

Manchester United entered Group F as the strong favourites with many football fans who expected them to get over that loss to Villarreal in UEFA’s second-string competition and advance as group champions. They may still live up to expectations and achieve that but the Red Devils suffered a shock defeat away to Young Boys on matchday one meaning they are already playing catch up on the early leaders. That was an opponent most pundits picked Man Utd to defeat quite easily, scoring a few goals on the road but the game didn’t follow the script. United did take the lead on 13 minutes through Cristiano Ronaldo but were pegged back on 66 minutes before Young Boys scored a winner deep on stoppage time.

The blame for that defeat could be put at the door of Wan-Bissaka who was sent off after just 35 minutes with his team enjoying a 1-0 lead and controlling the match. It looked like the Premier League side would get away with a draw from that match and Ole made changes that suggested he was playing for a share of the spoils but that backfired and fans weren’t happy. Inviting pressure. United eventually buckled on 95 minutes. Everyone connected to the club, from the coaching staff to the fans will want to see a response in this game with the club grabbing their first win.

Things have been unsettled for the club domestically too with their form so far showing four wins and one draw against one defeat. The 13 points on the board leaves them one behind current leaders Liverpool and after six games played just three points stand between the Reds in pole position and West Ham United down in seventh. Getting off the mark in the Champions League would do wonders for team morale ahead of a hectic domestic and European schedule.

Like their hosts, Villarreal head into this match, looking for their first win of the competition. They opened their account for the groups with a hard-fought draw against Italian Serie A side Atalanta on matchday one in Spain. That was a decent result given the level of competition, but they would have planned to get all three points on their patch. Victory for Villarreal in their opening away game of the campaign will provide a major boost to their chances of qualifying for the next stage, even at this early period.

The visitors have made a habit of ending level in crucial matches of late but played their part in what was a thoroughly entertaining 2-2 draw against Atalanta. It was the Italians that took the lead thanks to a goal on six minutes from Freuler before Munoz and Danjuma fired back to put the Spanish ahead with less than 20 minutes remaining. There was late drama when Gosens made it 2-2 just before Coquelin was sent off after picking up a second booking.

Since playing out that draw with Atalanta, followers of Villarreal have watched the team play two draws in three games, with each of those level finishes ending goalless. The first of those shares was a 0-0 away to Mallorca, with the latest being a goalless trip to Real Madrid. Two clean sheets, two draws away from home, and a point taken from Madrid is a decent return, especially when Villarreal won the spare game 4-1 at home to Elche.

Two teams without a win on the board yet but two teams that will believe they are good enough to claim victory. It’s difficult to get away from the fact each match involving these teams has ended in a draw with four of five ending goalless. Villarreal has drawn their last two away games in the league by a 0-0 final score, and that may interest followers of the stats when making their predictions.

A draw at home to a rival for the top spot in the league wouldn’t be ideal for Manchester United, so we could see them go on the attack early. A defeat away to Young Boys was harsh on the Red Devils, so they may enter this game believing they have a point to prove. If United play to their best, they are good enough to nick a narrow win. They will be made to work every minute of the match by an opponent that is always dangerous and eager to hit with speed on the counter-attack.

Make sure to bet on Man Utd v Villarreal with 22Bet!