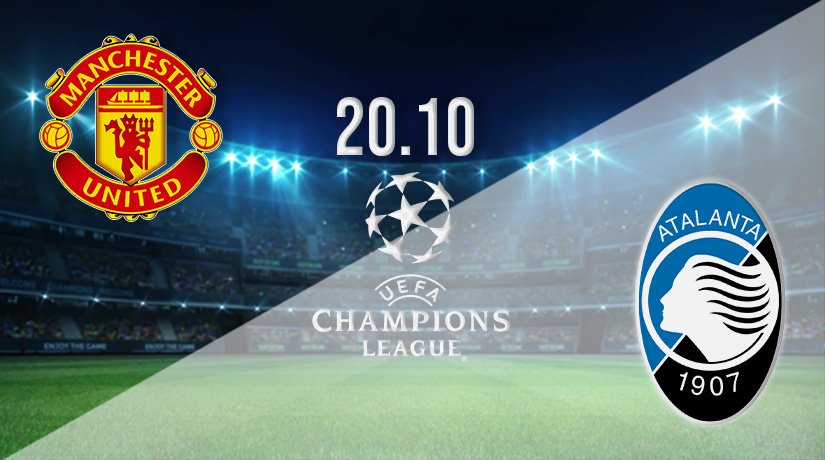 Manchester United return to Champions League action when welcoming Italian Serie A side Atalanta to Old Trafford. The Theatre of Dreams will be packed to capacity with United fans demanding a big performance from their players following another below-par effort registered in the Premier League at the weekend.

The locals are desperate for a win and three points to keep their Champions League quest on track. Making the knockout stages of the competition is the least the board expects this term.

Making it through and securing their involvement in the Champions League in the new year is the aim, but it certainly isn’t a given at this point. With the locals down in third place after winning just one of their first two games.

Victory here could send them into pole position, but Atalanta are unbeaten, set the pace after two games played and have hopes of holding their ground and winning the group. This is a fascinating meeting of two ambitious sides.

Wednesday presents us with a piece of footballing history as Manchester United and Atalanta meet for the first time in competitive action.

The sides have never crossed paths previously, meaning there’s the added incentive of scoring a first win and place in the history books as well as the three group points. Which team will get the desired result?

Man Utd got off to a slow start

Manchester United are third in Group F behind Atalanta and Young Boys but ahead of bottom club Villarreal, who have taken just one of the first six points that have been available to them. It was expected that last season’s Europa League finalists would battle it out for pole position in the pool.

They may still do that, but both Man Utd and Villarreal have got off to poor starts and already have some ground to make up if they are to progress. United have played two, won one, lost one, scored three and conceded three. The three points gained has them one behind Atalanta and level with Young Boys.

In their opening game, United fell to a surprise defeat away to Young Boys despite starting that match as hot favourites with most pundits. They lost that game 2-1 despite taking the lead inside 13 minutes thanks to a goal from Cristiano Ronaldo. Wan-Bissaka was then sent off, and as Solskjaer played for a point, his team ended up with nothing.

In their second group match, Man Utd finally got off the mark when beating Villarreal at Old Trafford. They did that at the end of September when gaining revenge on the Spanish side for that famous defeat on penalties in the Europa League final in spring.

United fell behind that day, but late goals from Telles on the hour and Ronaldo deep into stoppage time turned the game on its head. It was a dramatic finish, but the points were secured, and the pressure is now on United to build on that victory.

Atalanta are in the lead

Atalanta have set themselves a goal of challenging for both the Serie A title and Champions League trophy this season, and there’s no reason why they can’t achieve that. Winning either would be a huge task, and a major surprise, especially the UEFA prize, but they are good enough to put pressure on the Milan teams in Italy and make a nuisance of themselves in the later rounds of the Champions League.

To improve their chances of doing that, they will want to progress to the next round as winners of this pool. Atalanta have started brightly enough and are top of the pile.

The visitors have played two, won one and drawn one, scoring three goals and conceding two. They are on top of the tree but remain in a fragile position and could be toppled as early as Wednesday evening in Glasgow.

Just three points separate Atalanta in first and Villarreal in the basement spot. Victory in England would provide a major boost to their chances of holding their current position, while defeat would blow the pool wide open. This is a match Atalanta must try to get at least a point from.

They warmed up for this away day by hammering Empoli 4-1 on the road at the weekend in Serie A. That was a game most followers expected them to win but scoring four goals on the road in the top tier of Italian football is never easy.

The players deserve credit for how they won the match, and the performance would have provided a timely boost to team morale ahead of this crucial trip.

Man Utd are under pressure to get a win here after losing 4-2 at Leicester City on Saturday in the Premier League. That mauling by the Foxes at the King Power Stadium means Solskjaer’s job is hanging in the balance once again. Fans are beginning to get restless, and they’ll want to see the players stand up and be counted.

A big performance is required if they are to win over the growing number of critics in the stands. An early goal would suit the locals perfectly, but they know they will be made to earn it by their opponents.

Atalanta are the top team in the group at present but will feel like they are without pressure and have nothing to lose at Old Trafford. The longer this game remains goalless, the more the support will lose faith, and that’ll play into the hands of the Italians. Atalanta are organised, talented and patient.

A draw wouldn’t be the worst result for them, and a share of the spoils would likely keep the away team on top of the pool. They can frustrate Man Utd and feed off the anger in the stands.

The pre-match betting odds available at 22bet for this fixture has Man Utd priced at 1.675 for the win with Atalanta 4.66 and the draw 4.12.

Make sure to bet on Man Utd v Atalanta with 22Bet!