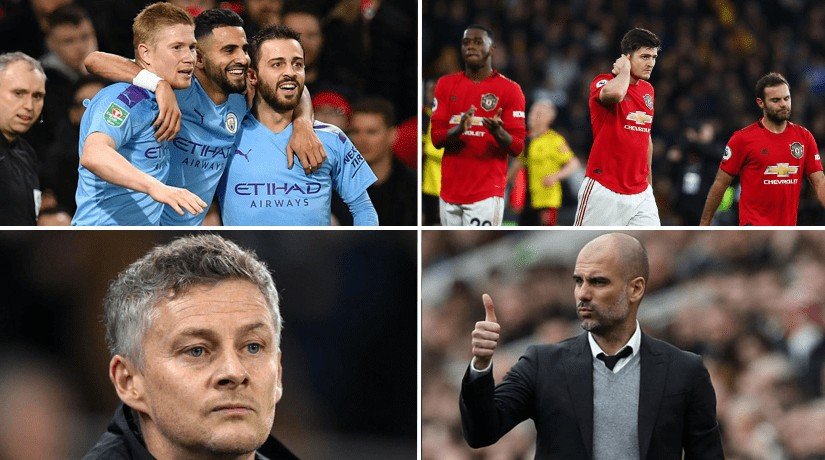 The Etihad hosted the second leg of the EFL Cup semi-final between Manchester’s notorious rivals on Wednesday evening. Manchester City were determined to finish the job and secure their place in the Carabao Cup Final, and with a 3-1 aggregate score, Manchester United had their work cut out for them.

Man Utd have progressed from two of their last three knockout clashes when losing the first leg by two goals (vs Olympiakos and PSG in the Champions League last 16 in 2013/14 and 2018/19). Not that this stat would help them tonight.

The game started with fury and intension as the hosts powered through the first fifteen minutes without letting Ole Gunnar Solskjaer’s men even touch the ball and created some brilliant chances in front of David de Gea’s goal.

Then everything changed. Man City lost the ball (pun intended) and became less and less organized. Errors for which they were punished.

Serbia international Nemanja Matic scored in minute 35 from Fred’s curled free-kick to complete a stunning strike into the bottom right. Bravo had no chance to save Manchester United’s first shot on target and the derby semi-final seemed to be back on track.

4 – Nemanja Matic has scored just his fourth goal for Manchester United in all competitions and first since Boxing Day 2018 vs Huddersfield – 399 days ago. Glimmer. #CarabaoCup #MNCMNU pic.twitter.com/zC7yWaVFT0

Just before half-time, Raheem Sterling had a goal disallowed thanks to an offside with a pinch of VAR intervention. And side note, shoutout to De Gea for having a good game… something we don’t say often.

The second half kicked off and fouls started reigning in one after the other. Tensions rose, yellow cards were brandished and Manchester United continued to press on. They were purposeful in their pursuit of another goal that would take the scoreline to a three-all aggregate and penalties.

Every time United made a mistake, City did their best to capitalize. Raheem Sterling squandered another would-have-been-goal when in minute 57 he broke out on the counterattack in what was their tenth chance of the match so far.

Kyle Walker’s powerful shot from outside the penalty box was the highlight of the second half, and De Gea saved it (a highlight on its own).

The sole goalscorer of the match, Matic was awarded a second yellow in minute 75 and United were left to play with ten men and a goal separating them from keeping their dream of EFL Cup glory alive.

And then we all thought our cries of misery were answered when Sergio Aguero found the back of the net in the 83rd minute as he slid the ball past De Gea to score in the bottom right corner. But alas, it wasn’t meant to be. The goal was overruled due to offside and we were back to feeling like this agonizing match would never end.

Man City gave away a free-kick just outside their penalty box minutes before the final whistle, and even Kevin De Bruyne was seen shouting in frustration at his own team-mates.

Guardiola’s side had 13 shots to United’s six. De Gea’s brilliance was most impressive, perhaps because it is De Gea we’re talking about after all; nevertheless, he is our man of the match (said no one for seasons).

Manchester City have become only the third team ever to reach three consecutive League Cup final, and they will face Aston Villa on March the 1st at Wembley Stadium. See you then!