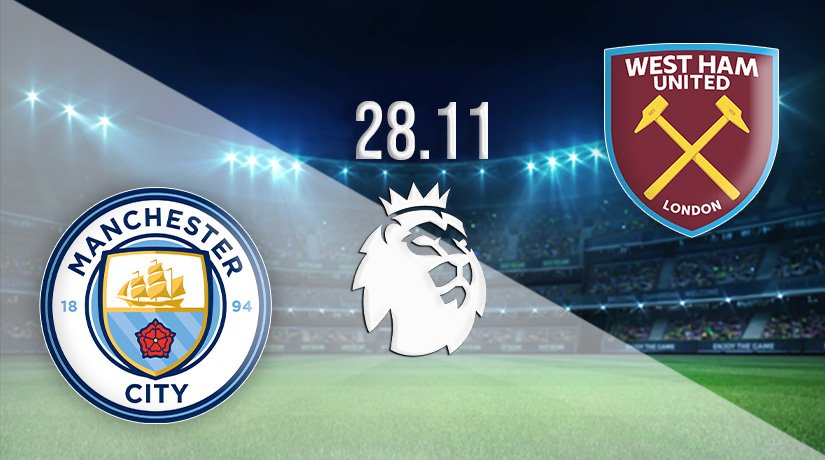 The race for the English Premier League title resumes and current champions Manchester City enjoy home advantage for the second time this week after playing PSG in the Champions League. They take on another Premier League title challenger on Sunday when welcoming West Ham United to the Etihad Stadium for a match you can follow live on television from 14:00. The stands will be packed with fans of the home club expecting to see another impressive win, but Man City can take nothing for granted against a Hammers side who are flying high at the minute.

Just three points separate the teams at this stage, and another competitive encounter is expected as the players prepare to do battle. Man City know they must make full use of the home advantage if they are to remain on the heels of league leaders Chelsea, while West Ham is seeking a win that would help them fend off Arsenal, who are pushing to move ahead of them and into fourth place. There’s plenty of football still to be played this season. Still, it’ll be interesting to see just how serious the Londoners are about finishing in the top four and securing Champions League football for next season.

This will be the second match between these two teams this season after the first ended in a goalless draw in the EFL Cup. West Ham went on to win that game courtesy of a 5-3 victory on penalties, and that will give the visitors confidence as they make the journey north, knowing another goalless draw would be a decent result. Man City are desperate to get their revenge over the Hammers for that cup loss while adding another three points to their tally.

Manchester City started this season as defending champions and the early favourites to retain their title, but any backers that were expecting the kind of stroll to the trophy and two in a row seen last season were quickly put right. The English Premier League is known as one of the most competitive competitions in the world, and for a good reason. We rarely see a team run away with the league, especially before Christmas, and this year is no different. Chelsea is the current leader, and Man City start the weekend sitting second behind the Blues on the ladder, three points off the pace.

The home team set up with their stats for the season showing eight wins, two draws and a couple of defeats, scoring 25 goals and conceding only six. That is impressive stuff, but it’s not quite as good as the Londoners who lead the table with Chelsea scoring more goals and conceding less. Man City already know they have a fight on their hands if they are to retain their trophy. To give themselves the best chance of achieving that, they must win their home matches, making the Etihad Stadium a fortress once again.

Man City’s recent form consists of four wins and a defeat with six points claimed from the last six available to them. They prepare for this game looking to complete the hattrick of wins, and that’s exactly what fans and many respected pundits believe they will do. Pep Guardiola’s men were last seen in action beating Everton 3-0 at this venue with the goals that day scored by Sterling, Rodrid and Bernardo Silva. England’s attacker Sterling showed he still has a lot to offer the team after being linked with a move away from the Etihad, and it’ll be interesting to see how much game time the attacker gets this winter as the fixture list steps up a notch.

West Ham are punching above their weight

West Ham United are a team that is often picked to finish in the bottom half of the table, giving their loyal supporters very little to cheer other than the odd upset win over the big six teams in the division. They are battlers but often lack the consistency needed to challenge for the European places, despite going close in each of the last few seasons. All that has changed, and under Scottish manager David Moyes the Hammers are punching above their weight, challenging for the top four places and a spot in next season’s Champions League. Fans are excited, allowing themselves an opportunity to dream of playing in Europe’s elite competition again, and they have every right to get carried away.

The visitors travel from their base in Stratford, East London, to Manchester, sitting fourth in the league after a dozen matches with 23 points on the board. That has them three better than Arsenal in fifth place and four points above fellow Londoners Tottenham, who can be found down in seventh and the lowest European slot. The Hammers have stats of seven wins, two draws and three defeats, scoring 23 goals and conceding 14. They were beaten last time out, a result that ended what was an impressive winning run. All eyes will be on West Ham to see if they can bounce back to winning ways at the earliest opportunity. Doing that at the home of the champions would certainly be a statement of intent.

Their winning run was halted last weekend when losing 1-0 away to Wolverhampton Wanderers, a team they expected to beat. Jimenez scored the game’s only goal to give Wolves an important three points while denying West Ham the chance to joint second with Man City. A win here could see them achieve that while extending their cushion over Arsenal and the others pushing for the prizes.

Manchester City is on a fantastic run of form and has a strong chance to add another three points to their tally and ramp up the pressure on the leaders Chelsea. If the home team play to the best of their abilities, they should have more than enough quality to create chances, score goals and take the points. They won’t take West Ham lightly. Guardiola and his coaching staff will make sure of that.

West Ham would have preferred to go to the Etihad on the back of a strong run of form and without pressure on their shoulders to get the win, free to play football. Last weekend’s defeat at Wolves means they must improve and get at least a point from this game if they are to avoid back to back defeats. No points from six would seriously damage their chances of holding on to a place in the top four.

Make sure to bet on Man City v West Ham with 22Bet!