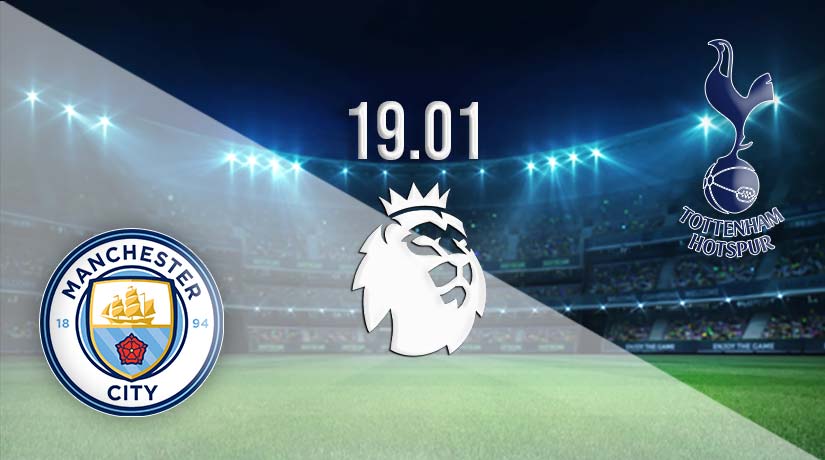 Action from the English Premier League continues following Wednesday’s match involving Crystal Palace and Manchester United in London. On Thursday, it’s the turn of the champions as Manchester City welcome Tottenham Hotspur to the Etihad Stadium. Both teams are in the running for a top-four finish this season, with Man City chasing down leaders Arsenal as they attempt to win three league titles on the bounce. The Gunners are clear of the chasing pack but there’s still plenty of football to be played this term.

Man City and Spurs both suffered defeats last weekend against their rivals with the Cityzens losing the Manchester derby to United at Old Trafford. Spurs were shot down by a remarkable Arsenal side as Mikel Arteta’s men push hard for the title, collecting the three points available to remain in pole position. It’s now left to Man City and Spurs to pick up the pieces and make a quickfire return to winning ways. City require a win to get them back on track and close the distance on Arsenal to five points. Their opponents have slumped to fifth in the table and need to a win to stay on the heels of Man Utd in fourth.

Will City use their home advantage to claim a timely victory or perhaps you fancy Spurs to pull the chair out from under their hosts, putting another dent in their title ambitions. Armchair fans will be looking for more of the same after these sides served up a five-goal thriller when last meeting at this venue. That was a remarkable game that ended 3-2 to Spurs and saw them take the points back to the big smoke. A repeat would heap more misery on Pep Guardiola’s team who start as the pundit’s favourite to get the win they so desperately need.

This was the season Manchester City planned to add its name to the history books by winning three Premier League titles on the bounce. Pep’s boys have dominated English football over the last few years and only a title win for Liverpool during the COVID-19 delayed season stopped them from winning five on the bounce. The Reds success in 2020 was the only time the Cityzens hasn’t finished with the league trophy since 2017. If they are to continue to tighten their grip over the competition, a huge effort is required from the players who have been off the boil since returning from the World Cup break. A winning streak is needed to get them back in the running.

Man City’s recent form is poor and not what you would expect from a champion or team that was expected to defend their crown. This season, the hosts have a dozen wins, three draws and three defeats, leaving them with 39 points on the board, placed second behind Arsenal who have 47 points against their name and are showing no signs of slowing down. City are currently one point better than Newcastle in third and six ahead of Tottenham who are outside the top-four. They have won only half of their last six league starts, losing two of five.

We last saw Man City in action on Saturday when they suffered defeat at Old Trafford in the Manchester derby. The Cityzens were picked to win that game with TV pundits coming down hard in support of the champions and they took the lead early in the match. Grealish struck the opener on the hour mark to put his team in a commanding position, but there was late drama at the Theatre of Dreams. Bruno Fernandes hit the equaliser on 78 minutes before Rashford made it 2-1 to secure the win with a goal eight minutes from time. City were left shocked but know they must make a quickfire return to winning ways before it gets any worse.

Spurs show down by Gunners

It’s fast becoming another disappointing season for Tottenham as they continue to blow hot and cold. The Londoners raise the hopes of their supporters by showing glimpses of what they are capable of only to lose matches they are expected to win. It’s a tough time to be a Spurs fan and the supporters demand more from their under-performing and under-achieving side. Times are tough, but the visitors remain in the running for a top-four finish and place in next season’s UEFA Champions League. That’s the least fans and the board expect from their side, but will they get their wish or are things about to go from bad to worse? We’ll find out at the Etihad on Thursday evening.

Spurs make this trip with their stats for the season so far showing ten wins, three draws and six defeats. The 33 points collected means the Londoners are five points behind a resurgent Man Utd side who sit in fourth place and look good enough to keep climbing. Thursday’s match will give Tottenham a golden chance to get the jump on the teams around them in the pecking order. Win in Lancashire and they’ll remain in fifth but will move to within just two points of the Red Devils with plenty of football to be played this year.

Tottenham has won only two of its last six games with three defeats and a draw making up that sticky spell. They were last seen losing to Arsenal at the Emirates Stadium on Sunday with the league leaders adding three points to its tally thanks to a 2-0 derby win. The beaten team offered little by way of threat in that game and everyone connected to the side demands a quick-fire return to winning ways. It has been a challenging winter for followers and much of the squad will know they are playing for their futures.

Man City are higher in the league, hold the home advantage and have the better recent form of the two sides involved here. If the champions play to the best of their abilities, they are good enough to collect the points, relieve a bit of tension and put pressure on their opponents.

You can back Man City to win at 22bet with odds of 1.344 available. If you fancy Tottenham to pull off a shock result, they trade at 8.3 while the draw can be yours at 5.3.