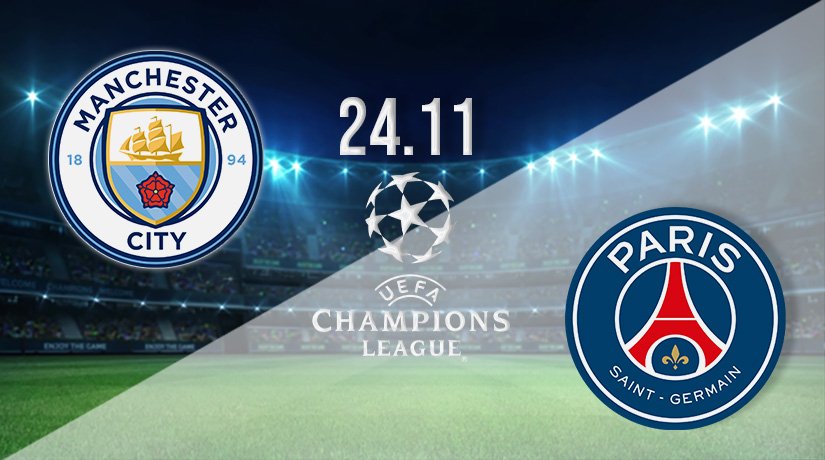 This Group A match will be played out before a bumper global audience, with millions keeping track of the play live on television. Armchair fans are hoping the stars come out to shine and put on a show.

Man City enjoy the home advantage here and will be eager to make it count, knowing a win and three points would secure their spot in the next round as winners of the pool. PSG are just one point behind their hosts at present and could move into pole position by claiming victory on English soil.

Both teams look to be already through to the next round, but there’s still all to play for here as claiming the top spot in the group should provide one team with an easier draw in the knockout rounds.

This will be the seventh match involving Manchester City and PSG, and the head to head stats show that the English team enjoys the advantage. Man City have won three already, with PSG sitting on one victory and two draws. The French side did claim that win last time, easing to a 2-0 at the Parc des Princes back in September.

Gueye and Messi scored the goals that day. They’ll arrive in town looking to do the double, beating Man City on their patch and removing them from the top spot but will they achieve their goal?

Man City enjoy back to back wins

Man City prepare for this match with their group stats showing three wins and a defeat. Since that loss to PSG in Paris, they have recovered well, winning each of their last two outings and head into game five, knowing that a revenge victory would seal them the top spot in the pool.

Man City have nine points on the board, one more than PSG, with 15 goals scored and seven conceded. That makes them the groups highest scorers by a comfortable distance, and only Bayern Munich have found the net more in the competition so far. That firepower will be required again on Wednesday.

Since losing 2-0 in Paris, Man City have played Club Bruges twice and beaten them twice, as was expected by most pundits and followers of the English champions. They went to Bruges in October and flexed their muscles, running out 5-1 victors on the road in what was a real show of strength by the team and the perfect way to respond to defeat.

They then did the double earlier this month on matchday four when beating the same opponent 4-1 at this venue. The goals in that match were scored by Foden, Mahrez, Sterling and Gabriel Jesus as the team reminded us why they are one of the early favourites to go one better than last season and win the Champions League trophy this term.

Their strong form has continued into the Premier League as the Cityzens strengthened their bid to overthrow current leaders Chelsea and successfully defend their title. They beat Man Utd 2-0 at the Theatre of Dreams, a result that paved the way for the sacking of Red Devils boss Ole Gunnar Solskjaer.

They then hammered Everton 3-0 on Sunday at this venue with the goals scored by Sterling, Rodri and Bernardo Silva. There’s confidence about the home dressing room ahead of this match, and it comes at the right time.

PSG need an away win

PSG head to England, knowing anything less than a win would leave them needing a favour in the final round of matches if they were to win the pool. The French side know they have already beaten Man City in France, so it certainly isn’t mission impossible here. If they claim back to back wins over their hosts, they would pass them in Group A and be the team to beat on the final night.

PSG are more than likely to go through to knockout football, but they’d much rather do it as winners of the group and face the runner up of another group in the next round.

The Parisians enter this match in second place, but they have a proud unbeaten record so far with two wins and a couple of draws. One of those wins came over Man City with the other against RB Leipzig in the following match. They have played four, won two and drawn two so far, scoring eight goals but conceding five.

PSG conceded the top spot in the pool to Man City last time out when managing only a draw against bottom side RB Leipzig who have been thoroughly disappointing to date. It will be remembered as two points dropped and could be the result that costs them the group win if they don’t take three points here.

That match in Germany ended 2-2 with PSG with Wijnaldum scoring a double, both goals cancelled out by replies from Nkunku and a late equaliser scored by Szoboszlai from the penalty spot with 92 minutes on the clock.

That was a tough one to take for all concerned with PSG and puts the pressure on the players to bounce back to winning ways in England. They travel on the back of two Ligue 1 wins, beating Bordeaux 3-2 away from home and Nantes 3-1 in Paris at the weekend.

Man City enjoy the home advantage and the backing of their support. They will also be encouraged by the fact PSG have conceded four goals in their last two away trips. That will have the Man City attack licking their lips in anticipation.

If the locals are at their best they should have enough quality to out-score PSG, claim the three points and book their place in the next round as group winners.

PSG may have conceded four goals in their last two games but they have scored five in that time and that’s what we have come to expect from the French side this term. They have an embarrassment of riches in attack but are always fragile at the back.

That is far from ideal for the coaching staff but it makes PSG an entertaining team to watch.

Make sure to bet on Man City by PSG with 22Bet!