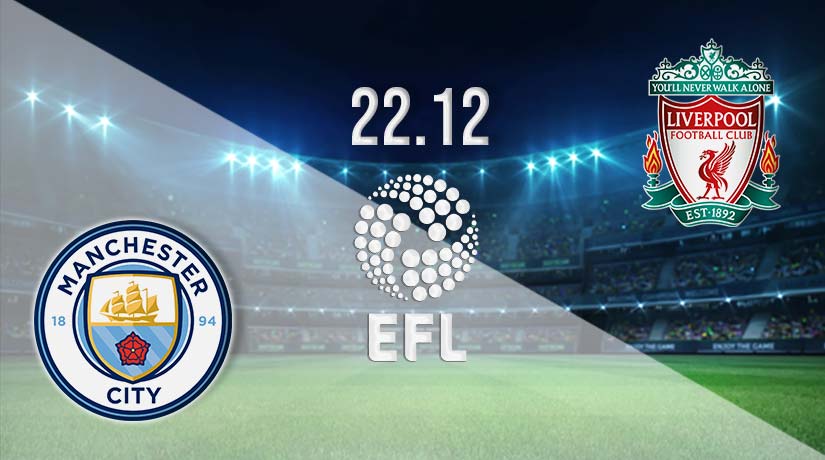 English football is officially back on the menu, and we prepare to tuck into a delicious EFL Cup schedule this midweek. It’s a joyous time for sports fans as domestic action returns following the interruption of a remarkable FIFA World Cup in Qatar. We enjoyed four weeks of pulsating play from the Arab World, including a stunning final between Argentina and France. But Thursday’s match involving Manchester City and Liverpool won’t come a second too soon for some. But which side will mark the occasion with victory?

Man City enjoys a home advantage over Liverpool for this EFL Cup match at the Etihad Stadium. With both teams entering confident they have what it takes to claim victory before going on to lift the trophy, we’re all set for a thriller. The winner of this match won’t just progress to the next round; they will eliminate a major danger in the process. The Cityzens have been picked to win by many respected pundits, but Liverpool fans remember watching their side battle for a 1-0 win when last facing Pep Guardiola’s men. Will we see more of the same, or will Man City get its revenge?

Armchair fans hope this renewal follows the trends set by past meetings of English football’s two biggest teams. Flicking through the stats, we note that both teams have scored at least one goal in six of the last seven and eight of ten. Digging deeper and five of the last six Man City and Liverpool games have produced four or more goals. How will you approach this match? Please read on as our team of football writers preview the game and offers their predictions.

Manchester City has every right to feel that the draw has been harsh to them after pulling Chelsea from the hat in the previous round of this tournament. They beat the Blues, only to be paired with Liverpool at this stage. If they do go on to lift the trophy, there can be no denying they will deserve it after sweeping past some top teams. In sports, there’s an old saying that to be the best, you must learn to beat the best, which will be the driving force behind Pep Guardiola and his men in training this week. They want to remind the country that they are the best.

The Premier League champions did enjoy a home advantage over Chelsea in the Third Round, and they made it count, blasting the Londoners 2-0. That was a match that had been billed as a 50/50 and potential early exit for the Cityzens, but their big-name players lived up to the occasion, as they have done many times in the past. Man City dumped Chelsea out of the EFL Cup with a 2-0 win early in November. Mahrez and Alvarez scored the goals that day. It took until the 53rd minute for Man City to break the deadlock, but they killed off their opponents with two goals inside six minutes.

Followers of the home team would love to see anything like a repeat performance in this match. Man City focuses on the Premier League and getting back to business. They’d often change their team around a little, bringing in some fringe and youth players for this competition to see how they performed. But that won’t be the case here, as Pep wants his stars to get some minutes back in their legs following the World Cup. Qatar 2022 finished on Sunday with Argentina beating France on penalties, but some players were eliminated weeks ago while others didn’t travel.

Liverpool made it past Derby County in the Third Round, but there was nothing impressive about their performance. The Premier League big guns made hard work of the tie at home to a Championship outfit, beating the Rams 3-2 on penalties. It’s unlikely that Liverpool fans will see a worse performance than the one watched that day. That match at Anfield ended goalless after 90 minutes, and the Reds weren’t much more impressive when the game went to penalties. But they did get the job done and are through to the next round.

There was no doubt Liverpool rode their luck in their previous EFL Cup match against the Rams, a team they should have been beating more comfortably than they did. But will their luck run out against the home of the EPL champions, or will that streak of good fortune continue? Often we see a team go through the rounds looking like they are destined to go all the way and often last longer in the tournament than rivals who caught the eye in the early stages.

This match could produce the eventual winner of the cup, as it would be no surprise to see either Liverpool or Man City hold the trophy aloft on the day of the final. But there’s much work to do between then and now, with Reds boss Jurgen Klopp knowing leaving it to fate is the quickest way to exit a competition. They must go and earn the right to be in the next round and remain in with a chance of winning this prize. We expect to see them field a strong team, and it could be as close to a full-strength starting 11 as you’ll see from Liverpool at this stage of the EFL Cup.

We saw one or two upsets in the previous round, including Blackburn Rovers’ 10-9 win over West Ham United on penalties. But this fixture will be no shock as both teams are good enough to be in the next round. But which side will grab the opportunity and book their spot? Man City has the home advantage, and fans hope to see their team make it count.

Make sure to bet on Man City v Liverpool with 22Bet!