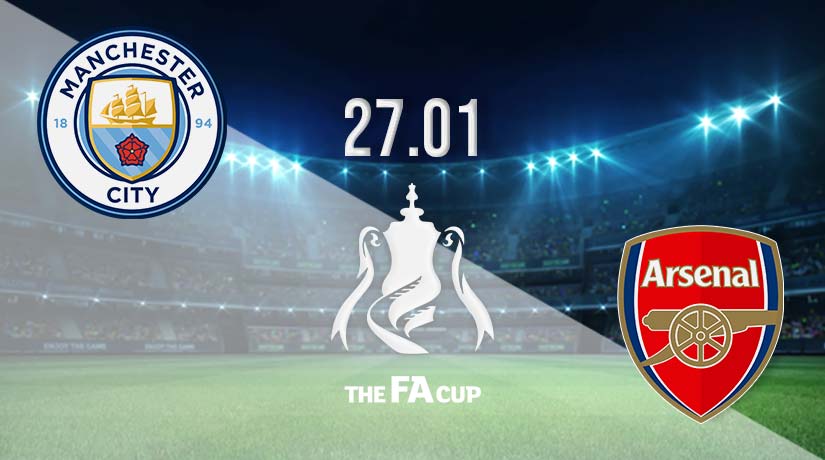 Football fans have a Friday night treat in store as Manchester City host Arsenal at the Etihad Stadium. You can follow this FA Cup fourth-round match live on television as two potential winners go head-to-head, battling for the victory needed to keep them in the competition. Man City are the home side and has been picked by many respected pundits, but it takes bravery to oppose Mikel Arteta’s Arsenal side, with the Gunners showing the best form we’ve seen from them in years. Can the Londoners spring a surprise and eliminate their opponents?

Man City v Arsenal is a match good enough to be the final, and this fixture certainly wouldn’t look out of place at Wembley in late spring. But the luck of the draw has paired the Cityzens and Gunners at this early stage, meaning we’ll lose one of them by the final whistle. Will it be Man City marching into the next round, or can Arsenal continue their winning streak by claiming a rare victory at this venue? We must wait for our answer to that question, but we can’t wait for the kick-off. This match has captured the imagination of football fans worldwide.

Friday will be the first time these sides have crossed paths this season, but Man City enter having won their last five against Arsenal. That includes a home and away win over the Gunners on route to winning the Premier League title last season, their second in two years. The last time Arsenal beat Man City was in the FA Cup in the summer of 2020 during the lockdown, to make things even more interesting. Keep reading as our team of football writers run the rule over this match, bringing you up to speed on the form of both before making our prediction on the side we expect to win the game and kick off the weekend in style.

Pep Guardiola has enjoyed a memorable time in charge of Man City, and there have been many more good times than bad. But is that purple patch about to come to an end? The Cityzens have recently dominated English football, losing the EPL title only to Liverpool at the finish line of the 2019/20 campaign. They have won each of the last two league flags up for grabs and started this season as the favourites, with pundits to make it three on the bounce. Man City started the season with the kind of support that suggested losing wasn’t an option. But it’s always an option at this level and in such a competitive division.

Will Man City win the league for the third time in three seasons? That remains a possibility at this stage of proceedings, but they are playing catch-up. After 20 games played – one more than the league leaders – Man City has stats of 14 wins against three defeats and three draws. The champions have scored 53 goals already while conceding 20. The 45 points claimed means City are already five behind league leaders Arsenal who could stretch their lead to eight points by winning their game in hand. Another uncomfortable finish awaits the Cityzens, but armchair fans will love it as the main contenders become desperate.

Since losing 2-1 to United in the Manchester derby earlier this month, Man City has played two and won two, beating Tottenham and Wolves in the league. Both victories came at home, smashing Spurs 4-2 before putting three goals past Wolves without reply. Star striker Haaland has scored four goals in those two matches, including a stunning hattrick in that 3-0 win last weekend. Confidence is high as the striker goes in search of more goals. Will they come against Arsenal?

It’s shaping to be an exciting season for Arsenal’s long-suffering fans. The Gunners support hasn’t had much to cheer in recent years as they watched their team struggle to nail down a top-four finish in the Premier League and secure involvement in the money-spinning Champions League. But that wait looks to be at an end, and the least they expect this season is to finish amongst the prizes. There’s still a  lot of work to be done to win the league, but Arsenal is in the fight, leading from the front, and fans can’t ask more from the players. They are also going well in the cup and would love an EPL and FA Cup double.

Arsenal beat Oxford United 3-0 away from home in the previous round, a result that would have done wonders for the confidence of their squad players and the best of the talent coming through. But everyone connected to the North London side understands Friday presents a far tougher challenge, and Arteta will respond. The team that takes to the field against Man City will be different from the one that swept past Oxford in the third round. Mikel will want to ensure he has the best starting 11 possible for this match.

We last saw the visitors in action at the weekend when scoring one of the most impressive wins of their season when beating Man Utd in London. Having already lost to the Red Devils, Arsenal were desperate to suffer a repeat performance, and they dug deep to secure the three points. Despite falling behind early in that game, a 90th-minute winner from Nketiah – his second of the game – was enough to secure the points.

Man City is the home side and has enjoyed some great results over Arsenal in recent seasons. Will Pep prove his class, or will his former apprentice show he has become the master? If the locals are at their best, they should have enough class to sneak through.

Make sure to bet on Man City v Arsenal with 22Bet!