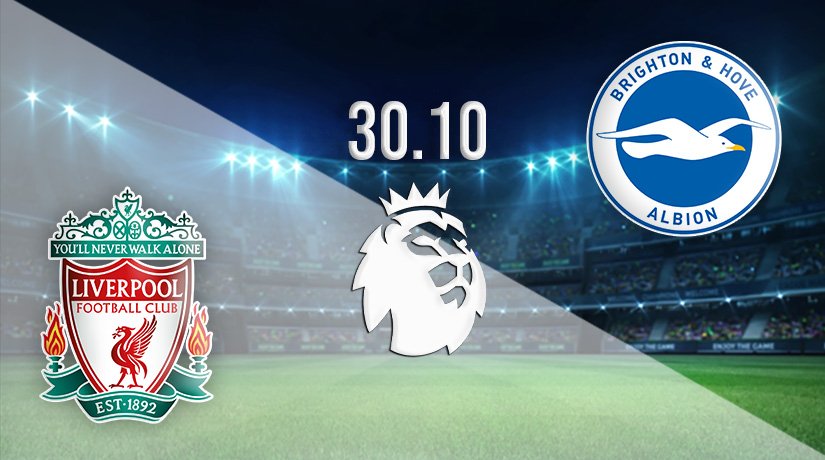 Liverpool put their unbeaten record in the Premier League on the line against Brighton Saturday at 15:00 GMT.

Having destroyed Manchester United at Old Trafford 5-0, the Reds look to continue their scintillating start to the season against the Seagulls at Anfield.

Brighton have had a fantastic start to the season with four wins, three draws, and two defeats. But the Seagulls are without a win in their four outings, with three draws and a defeat.

This promises to be a cracker of a match.

After scoring 10 goals in their last two Premier League matches – 5-0 against Watford and 5-0 against Man United, Liverpool’s attacking play is as good as it has been in recent years.

Firmino, Salah, and Mane are all in flying form, with Salah especially playing at a very high level to be labeled the best player in the world on current form.

After a difficult match against Atletico Madrid, albeit while scoring, Naby Keita was inspired at Old Trafford, crowning his performance with a goal.

Back to Reality for Brighton

Despite a stomping start to the season, Brighton have hit a tough patch in the last four matches with four stalemates and a defeat against Man City.

The characteristic of this four-match run for the Seagulls has been the drying up of goals; they have managed only two goals.

Before the Man City game, Brighton had conceded only three goals in the Premier League; this indicates a solid defensive foundation for Graham Potter’s men.

In the last five outings, in all competitions, Jurgen Klopp’s men have won four and drawn one, scoring 20 goals and conceding 5 goals.

Liverpool are also unbeaten in the league this season, with only three draws against Chelsea, Brentford, and Manchester City to count as dropped points.

In their last five matches, Brighton have won one, drawn three, and lost one. In this run, the Seagulls have scored four goals and conceded five.

In the 18 times they have faced each other, Liverpool have emerged victorious 12 times, whereas Brighton have managed two wins. Four matches between them have ended in stalemates.

This run includes seven home wins and zero home wins for Brighton. This means that the two wins for the Seagulls have come at Anfield.

In the most recent five matches between Liverpool and Brighton, the Reds have won three, drawn one, and lost 1 to the Seagulls. That defeat came last year at Anfield as Brighton ran out 1-0 victors.

The last five fixtures pitting these two teams have resulted in seven Liverpool goals and four for Brighton.

Sadio Mané is expected to return to the starting 11 alongside Salah and Firmino after starting on the bench at Old Trafford.

Graham Potter has three injury worries to contend with; Tudor Baluta, Steven Alzate, and Danny Welbeck are all absentees.

Otherwise, the Seagulls have their main guns available for the outing at Anfield against Liverpool.

Salah has been Liverpool’s talisman this season. He leads the top scorer table with 10 goals after 9 rounds of the season.

The Egyptian highlights his all-around importance to Liverpool and has five assists to his name in the premier league this season.

He looks to be in the mood this season, and he’s the center of everything good happening in the Liverpool team right now.

He will be the danger man in this game, and Brighton have to find a way to stop him, or they will be caught in the spell of this magician.

For Brighton to stand a chance of getting something from Anfield, their defensive display will have to be inspired given the danger posed by the Reds’ front three.

Lewis will play a pivotal role in organizing the rear guard and leading them in a tough stadium against a lethal opponent that is scoring goals for fun at the moment.

The back three will have to withstand the intense pressure and pressing that Liverpool will place them under, and they will need to hold their nerve to fashion something to hurt Liverpool on the other side.

Lewis Dunk will play a central role in Brighton’s chances of causing an upset in Liverpool.

Liverpool are irresistible going at the moment. Led by the magical Mohamed Salah, expect the Reds to put Brighton under immediate pressure egged on by the vocal Anfield support.

Brighton will seek to soak the pressure, ride the early onslaught, and stamp their imprint on the match by fashioning some chances.

Recent outings show that Liverpool’s defensive solidity can be disrupted by quick, direct moves at their defense.

But given their current form, belief, and given the role the Anfield crowd often plays in these games, Liverpool will take all three points to extend their unbeaten start to the season.

Make sure to bet on Liverpool vs Brighton with 22Bet!