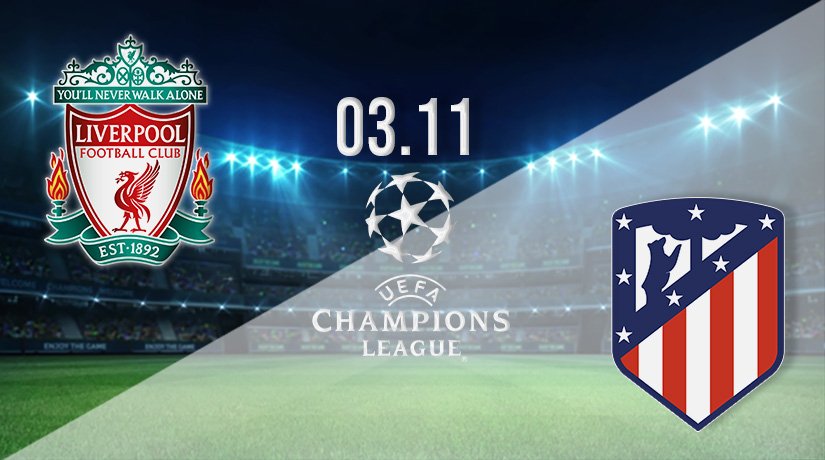 The champions of Spain visit Merseyside on Wednesday evening in round four of the UEFA Champions League group stages. Home team Liverpool welcome Atletico Madrid to Anfield with both teams hunting for all three points to keep alive their dreams of progressing as group winners. The Reds are in control of Group B with a maximum of nine points on the board after three games. Atletico Madrid lack the same pristine record as their hosts but are confident of going through and know an away win would strengthen their chances of achieving that while blowing the group wide open.

Liverpool was poor in the Premier League and Champions League last season but look like a team rejuvenated for the 2021/22 campaign. Jurgen Klopp’s crew are one of the early favourites to win the league and are near the head of the market to return to the top of Europe. To give themselves the best chance of achieving that they must make Anfield a fortress. Beating the kings of Spain to secure top spot in the league would send out a statement of intent to the rest of the competition while building confidence in the ranks.

The stats sheet shows Liverpool and Atletico Madrid have met seven times previously with the head to head stats showing three wins for the Spaniards with two for Liverpool and two games ending in a draw. The most recent was played last month when Liverpool nicked a stunning 3-2 away win in Madrid. Will they do the double or can Atletico get their revenge?

Reds have been point perfect

Liverpool are going great guns domestically and in Europe. They sit second in the Premier League behind current leaders Chelse with the Blues from London enjoying a three- point advantage over the Reds from Merseyside. Liverpool are the only unbeaten team in the top tier of English football and one of the only unbeaten teams left in the top leagues across Europe. They have six wins against four draws but have struggled to finish teams off in recent games. Their league stats show Liverpool have drawn three of their last five.

In the Champions League they are top of Group B with nine points collected from their opening three games. In addition to their perfect start at the halfway stage they have scored 11 goals but conceded five. The goals against tally isn’t something that will be a worry to the coaching staff at this stage and it won’t stop them progressing to the next round of this competition but it may give Klopp and his men food for thought when making their plans for the knockout rounds.

The home team were last seen in action being held to a draw at this venue by Brighton. It was a match they were expected to win with a bit to spare and certainly created enough chances to bank the three points but were left with only one after some suspect defending. Goals from Henderson and Mane gave the Reds a 2-0 lead inside 24 minutes but the Seagulls swooped with strikes from Mwepu and Trossard. That four-goal draw caused them to lose ground on Chelsea and fans will want to see a quickfire return to winning ways.

Atletico Madrid have failed to impress

Atletico Madrid may be the surprise champions of Spain, holding off the attentions of Real Madrid and Barcelona in the latter weeks of what was a season impacted by the pandemic. Still, they have failed to set the heather alight in this competition so far. Playing in the Champions League is nothing new to Atletico, of course, but doing it as the flag bearers for Spanish football is, and they may just be feeling the strain. The visitors arrive in England knowing they must win if they are to challenge their hosts for the top spot.

The visitors are second in the league table, with four points claimed from the first nine available to them. They have won one, drawn one and lost one of their three outings so far, scoring four goals but conceding the same number. They are currently in second place but on goal difference only as Porto have matched their form so far and also have four points racked up on the board. Bottom of the pool is AC Milan, who are the whipping boys of the group thus far, losing all three games.

If Madrid lose this match at Anfield and either FC Porto or AC Milan get three points from the other game, things will start to get interesting. They must get something out of their trip to England if they are to remain in a strong position for second. Atletico were last seen in action beating Real Betis 3-0 in La Liga on Sunday. Despite that win, the champions are already behind derby rivals Real Madrid. It’ll take a big performance from Atletico to get three points from this match, but they are certainly capable of doing it.

Liverpool are top of the pool with a 100% record, have home advantage and are full of confidence. If they claim another win here, they will be through to the next round and progressing as convincing winners of the group. That’s something Klopp will want to see his men do after dropping two points at the weekend.

Atletico Madrid don’t need to win this game. This isn’t an all or nothing set-up, but they know the pressure is on from Porto and can expect a late fightback from Milan, who haven’t got going yet. Madrid will take heart from their opponent’s recent draws and would see a share of the spoils as a decent return from a trip to Anfield. It won’t come easy, of course, but Madrid do have the players and the experience to push Liverpool hard.

The pre-match betting odds available at 22bet has Liverpool priced up at 1.61 for the win with Atletico Madrid 5.6 for victory on the road while a draw is 3.94.

Make sure to bet on Liverpool v Atletico Madrid with 22Bet!