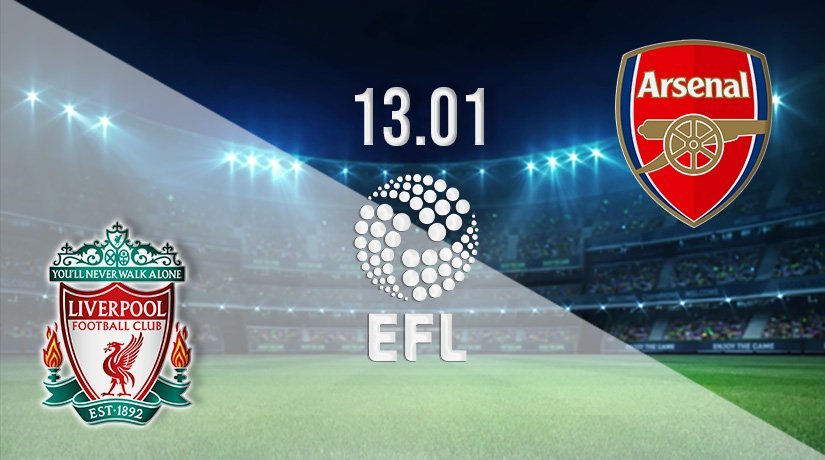 We have a quieter than normal Thursday schedule this week with games planned in the African Nations, Coppa Italia, Premiera Liga and the EFL Cup. The latter is the competition that attracts most attention as two giants of English football clash in the semi-final of the EFL Cup.

Liverpool host Arsenal at Anfield in a first leg you can follow live on television from 19:45 GMT as both teams go all out to book a place in the final and contest the season’s first piece of silverware. Will Liverpool make the home advantage count to secure the right result and progress to the next round or can the Gunners fire back from that weekend heartbreak suffered in the FA Cup?

The other semi-final has already been decided but the Reds and Gunners are playing catch-up with this first leg. The rivals will meet at Anfield on Thursday then settle the semi-final a week later in London when Arsenal get their chance to host.

The visitors for this match know victory would move them to within touching distance of the final but if they can ensure the tie remains competitive heading back to London, Mikel Arteta’s men will fancy their chances of going through.

Liverpool and Arsenal have met many times before in the latter rounds of major competitions and the head to head score in the EFL Cup makes for interesting reading. The rivals have faced off 16 times in the past and there is nothing between them in the head to head count.

Liverpool have five wins with Arsenal on five wins and the other six games ending in a draw. This will be the second meeting at this venue of the season after Liverpool’s stunning 4-0 home win over Arsenal late last year.

Reds have lost their way

Liverpool started this season with many fans and pundits expecting the club to challenge Manchester City for the Premier League title and Chelsea for the Champions League prize. The Reds have won both trophies in recent seasons and have a squad that is good enough to do the same again.

Entering 2022, Liverpool remain fighting on all fronts, including the Champions League, but their chances of being crowned champions of England are fading fast. They are in need of a shot in the arm and quickfire return to winning ways after failing to win any of their last three league starts. That drought consists of two draws and a defeat.

Making it to the final of the EFL Cup and winning the first available piece of silverware has the opportunity to provide a timely confidence boost to the side. A trophy win in winter could help launch their season and it would do wonders for team morale as we race towards the knockout rounds of UEFA’s elite competition and a crucial stage of the domestic season.

The EFL Cup isn’t top of their priorities but Jurgen Klopp is a manager well aware of the fans’ thirst for trophies.

Liverpool were last seen in action beating Shrewsbury Town at Anfield in the FA Cup on Sunday afternoon. That was a game they were expected to win, even after Klopp changed things up, giving many youth and fringe players their chance to impress.

Those called upon to do a job had no trouble stepping up to the mark and they progressed with ease, showing confidence and maturity. Liverpool beat the Shrews 4-1 following a dramatic 2–2 draw with Chelsea at Stamford Bridge in the Premier League a week before.

Arsenal manager Mikel Arteta had enjoyed a smooth few weeks by his standards at the club but he hit another rocky patch at the weekend and the manager’s job is now back in the firing line. Arsenal have a proud record of winning the FA Cup, especially in recent seasons.

Success in that tournament is the only thing supporters have had to cheer about in recent times but there will be no visit to Wembley in spring to contest one of the most famous titles in world football. Arsenal were knocked out in the early rounds and that shocked everyone with a connection to the club.

The Gunners went to Championship side Nottingham Forest in the FA Cup on Sunday and were sent packing, knocked out of the tournament by lower league opposition in what was one of the shocks of the rounds and a real embarrassment for all concerned.

It was a match many expected Arsenal to win but the players had been warned not to take their opponents lightly, especially on their patch as it could come back to bite them. That’s exactly what happened and as Arsenal huffed and puffed their way through the game, it was the Tricky Trees that got the all-important goal to send them through to the next round.

Grabban scored the only goal of the match when notching a dramatic winner with 83 minutes on the clock. With the game heading for extra-time and penalties a possibility, Nottingham Forest reacted, winning the match at the death then holding firm in defence.

Arteta was forced to apologise to Arsenal fans for the display and early cup exit. That makes it even more crucial that his side wins the EFL Cup.

The Reds enjoy the home advantage for this first leg and know the importance of making it count. The tie won’t be decided at Anfield but if the locals can secure a comfortable win and score a few goals while keeping a clean sheet it will move them closer to securing that spot in the final and crack at winning the EFL Cup.

Failure to win means the Reds will head to London next week needing a victory.

Arsenal may have fielded a weakened side at the weekend but that FA Cup defeat rocked the team to their foundations and manager Arteta finds himself on thin ice once again. He gambled with the number of changes made and was forced to pay the price.

That ramps up the pressure on the manager, his backroom staff and each of the players selected for this first leg at Anfield.

If you are a registered member of 22bet you can make your predictions on the outcome of this game. Liverpool to win the match is priced at 2.13 with an away victory for Arsenal trading at odds of 3.3. The draw is 3.54.

Make sure to bet on Liverpool v Arsenal with 22Bet!