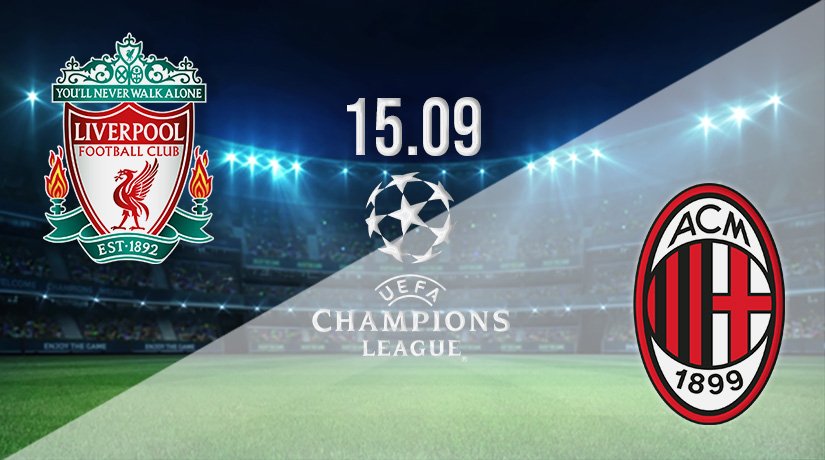 Champions League football returns to a packed Anfield on Wednesday evening when Liverpool of the English Premier League host Italian Serie A side AC Milan. The Reds surrendered their Premier League and Champions League crowns last season almost without a fight with Man City and Chelsea, the new champions. The fightback starts here as the locals aim to prove they are back by claiming a major scalp.

To get off to the perfect start and bank all three points, Liverpool must see off a talented opponent in AC Milan who hold their own hopes and ambitions of progressing. The visitors want to get something out of this match and go on to secure their passage through the group and into the knockout stages of the UEFA Champions League. They could lose this opener and still achieve that but claiming a point or better would help breed confidence in the ranks.

Liverpool and AC Milan have met in competitive action twice before, with the Italians unbeaten in both previous contests over 90 minutes, but one was a stunning Reds win on penalties. Those matches came in the Champions League finals in 2005 and 2007. The first was that famous 3-3 draw that went to penalties which Liverpool won 3-2, but Milan got their revenge when winning the second meeting by a 2-1 score. Will the home team finally get off the mark here and secure their first win over Milan in regulation time?

Reds on the comeback trail

Liverpool returned to the head of European football two seasons ago when beating Tottenham in the final. That famous victory followed a near miss the season before when narrowly beaten by Spanish side Real Madrid in the final. It was a tense match, but Liverpool deserved their victory over Spurs last summer, with that win capping what was the most successful season in the club’s history. They were unable to build on that success and lost their English and European titles less than 12 months later.

The Reds are already on their way along the comeback trail and are unbeaten in four Premier League matches with three wins and a draw. They have collected 10 points so far, which leaves them joint top of the league with Man Utd and Chelsea, one point ahead of Man City in fourth. Liverpool has scored nine goals already, conceding just one, and that tight defence will be key to any success the club enjoys this term.

The home team were last seen in action on Sunday when hammering Leeds United 3-0 at Elland Road in the Premier League. It was a match most pundits expected them to win, and they did the job, but the players deserve credit for how they performed. The margin of victory was impressive and could have been greater. That was the perfect warm-up for this crucial Champions League opener against one of European football’s biggest names. The players are now hungry for more goals.

Milan hoping to improve on both fronts

AC Milan enjoyed a stunning season last term when finishing as runners up in Serie A behind champions Inter Milan. They pushed their derby rivals hard throughout the season and looked for large parts of the campaign like they could go on and lift the trophy, but in the end, they lacked the consistency needed. Inter Milan kept their composure under pressure and finished up fully deserving of their title. The runners up will now look to build on that and try again this season, hoping to go one better and overthrow Inter Milan while improving in this competition.

AC Milan has made a strong start to this season and is joint top of the Serie A after three games played. They have nine points from a possible nine, scoring seven goals and conceding just one. At present, their efforts have been matched by Roma and Napoli who also carry a 100% record while defending champions Inter Milan are fourth with seven points collected after a weekend draw. That promises to be a compelling campaign, but Milan’s start would have injected fresh confidence into the ranks.

The visitors continued their winning start to the season when beating Lazio 2-0 at home on Sunday. It was a game they were favourites to win, but the players performed above expectations throughout the 90 minutes, especially in defence, where they kept off a strong Lazio attack. That win, two goals scored, and a clean sheet would have done wonders for their confidence, and they arrive in England ready for action.

Two sides that will rate their chances of going through to the knockout stages of this competition, but if they are to progress as winners of the pool, they will want to get off to the perfect start. Liverpool holds the home advantage and will be backed by a capacity crowd as fans welcome back Champions League football. The team has been strong in attack and defence so far this season, but it’s that study backline that will make the difference here.

AC Milan would dearly love to leave the home of their main rivals with all three points but know they have been handed a tough opener. A draw and point from this game would do wonders for the confidence of the visitors and mean they aren’t playing catch up on the Reds at the first opportunity.

22bet members will find betting odds available on this match, with Liverpool trading at *** and AC Milan ***. The draw is *** for bettors struggling to separate the teams. Prices on the winner of this match, as well as dozens of specials, will be available up until kick-off time. Some of the other options available include both teams to score, first goalscorer, handicap, correct score, half time/full time and more.

Members can also wager after the match has started, thanks to in-play betting. Most of the original markets remain with the odds updated to reflect the score and flow of the match.

Make sure to bet on Liverpool v AC Milan with 22Bet!