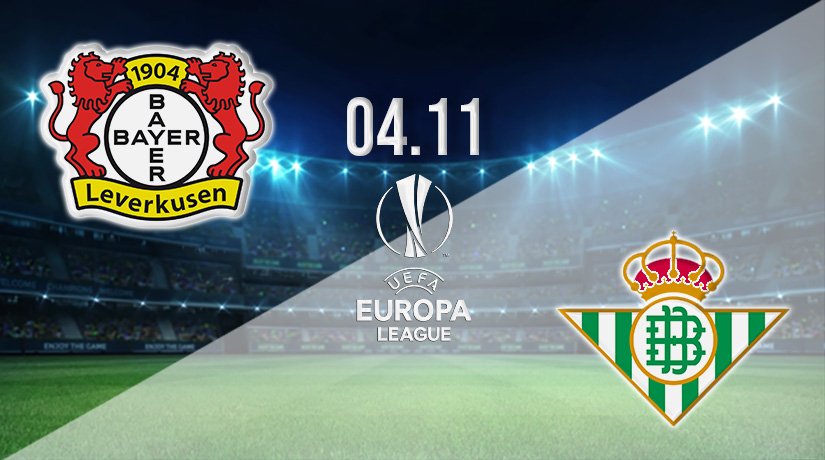 The two leading teams in the Europa League’s Group G, with 7 points apiece, face each other in the BayArena on Thursday at 21:00 GMT.

This fixture will likely determine the eventual winners of the group. Given the 1-1 draw in Spain, this match takes great importance to both teams as they seek to qualify from the group ahead of third-placed Celtic with 3 points.

Can Leverkusen Make the Home Stadium and Support Count?

The Leverkusen home form does not offer much promise as Gerardo Seoane’s men prepare to face Real Betis. With the latest result being a 2-0 defeat to Wolfsburg in the lead-up to this match, Leverkusen have some improving to do.

Previously, Gerardo Seoane suffered his heaviest defeat in the 5-1 demolition by Bayern Munich. There is a pressing need for Leverkusen to sort their home form to stand a chance of taking something from Betis and taking charge of Group G.

Can Real Betis Take a Step to Sealing Top Spot in Group G?

Real Betis also prepared for the trip to Germany by losing 3-0 to the La Liga favorites Atletico Madrid at the weekend.

With an impressive start to the La Liga season, Betis have a good chance of taking control of Group G and enhancing their chances of qualifying from their group by winning matchday 4 against Leverkusen at the BayArena.

Gerardo Seoane’s men are currently in the Champions League places in the Bundesliga table with 17 points, one ahead of Mainz, Union Berlin, and Wolfsburg, all on 16 points. Leverkusen are 8 points behind Bayern Munich, the league leaders, on 25 points.

After an impressive start, Leverkusen’s form has become inconsistent with two wins, two defeats, and a draw in their last five outings.

In their first five home matches this season, Leverkusen have won two and lost three, with the losses coming against Borussia Dortmund, Bayern Munich, and Wolfsburg.

This shows that Leverkusen’s home form is not as stellar and intimidating for the visitors.

Real Betis, with 21 points, are only four points off the league leaders in La Liga Real Sociedad. With three victories and two losses from their last five outings in La Liga, Manuel Pellegrini’s men display a semblance of consistency to challenge the top half of the La Liga table.

Their away and overall form are identical with three wins and two losses in their last five outings away from the comforts of Estadio Benito Villamarín.

Both Betis and Leverkusen have won two and drawn one match in their three outings in the Europa League this term; the outing in the BayArena will be important in differentiating the two at the top of Group G.

Leverkusen has several missing players that are potential starters. Two forwards are out with ankle injuries; these are Emrehan Gedikli and Patrick Schick.

Given these absences, Gerardo Seoane will have to make do without some of the key players in the squad to get a result.

The one-match suspension of defender Edgar Gonzalez will affect his appearance in the next La Liga match against Sevilla; it will not affect eligibility for the match at the BayArena on Thursday in the Europa League.

Robert Andrich scored the equalizer in Span to earn Leverkusen a point as the match ended 1-1. He will be crucial again as Leverkusen welcome Betis to the BayArena in this decisive match.

Andrich will be crucial, alongside Demirbay and Adli, to set the match’s tempo, keep and recycle possession, and drive the team forward to enhance Leverkusen’s chances of getting something from this match.

He will also offer a goal threat, as he demonstrated in the first leg of this match, which will be crucial to Leverkusen’s chances.

Borja Iglesias will be tasked with leading the line for Real Betis as they set about earning points at the BayArena.

Iglesias proved in the first leg that he can be decisive by converting the penalty that gave Betis the lead. Although they were pegged back late on by the equalizer from Andrich, Iglesias showed his importance to the team.

He is set to play an important role if Betis are to get something out of this fixture in Germany on Thursday.

Gerardo Seoane’s men will seek to start strongly in this match to break down the organized and well-structured Real Betis side under Manuel Pellegrini.

Expect Real Betis to offer a potent attacking threat of their own, even away from home, which means Leverkusen must be wary of this danger.

Given the 1-1 stalemate from the first leg, these teams are well-matched across the pitch. But expect the home advantage to play a considerable role in favor of Leverkusen.

This will be a decisive tie in Group G, and Leverkusen will take advantage in a tight affair and take all three points to take charge of the group.

Make sure to bet on Leverkusen vs Real Betis with 22Bet!