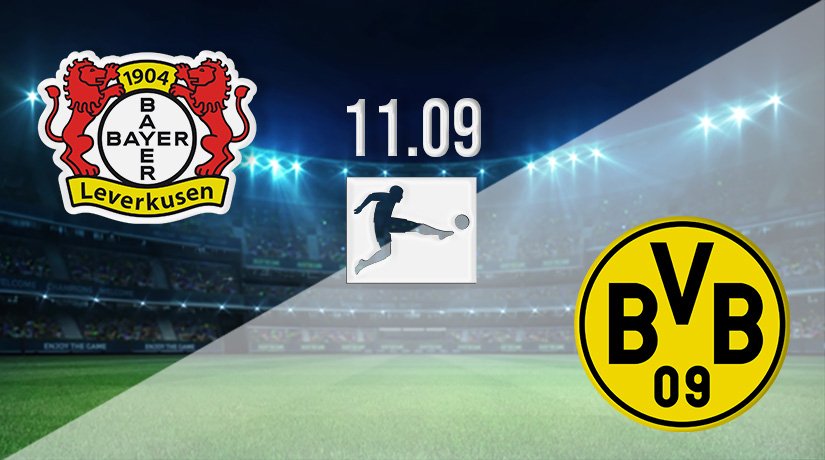 German Bundesliga action returns following a break for World Cup qualifiers and there’s a full fixture list scheduled for this weekend. The action begins on Saturday afternoon with six games on the programme before another three on Sunday. That’s great news for followers of the top flight of German football and for armchair fans with a selection of matches shown live on television. In this article, our team of football writers preview Bayer Leverkusen vs Borussia Dortmund set for a 14:30 GMT start.

The home team are unbeaten in their opening three games and will aim to continue their strong form as they aim to battle for the Bundesliga title, finally toppling long-term champions Bayern Munich. To have any chance of achieving that, they must win their home games. Borussia Dortmund has lost two of their three games but will view this as a chance to get their title charge back on track.

The head-to-head stats attached to this fixture make for exciting reading. In the two games involving Bayer and Borussia last season, the teams produced a combined seven goals, with both teams on the scoresheet at least once in each of their last three. The most recent clash produced a 3-1 home win for Borussia Dortmund, meaning Leverkusen are out for revenge. They did win their last home game against Borussia by a 2-1 score.

Bayer Leverkusen was one of the pundits’ pre-season picks to challenge Bayern Munich for the Bundesliga title, but they dropped two points in their opening two games. Leverkusen opened their campaign with a 1-1 draw away to Union Berlin. That was a match they were expected to win and had the opportunities to do just that, but a lack of composure in the final third and some early-season rustiness cost them. Union Berlin caused a shock when scoring the opening goal on seven minutes, with Awoniyi breaking the deadlock before Diaby drew his side level shortly after. Despite dominating, Bayer couldn’t find the winner.

They were much better on their home debut when hammering Borussia Monchengladbach 2-0 on matchday two. Leverkusen looked more like their old selves that day, going through the gears, creating chances and making them count. Goals from Bakker, Schick, Diaby and Amiri made it a comfortable afternoon, with two of those strikes coming in the opening eight minutes of the game.

Bayer was last seen in action away to Augsburg, and they were ruthless again that day. Leverkusen scored another four goals that day but received a helping hand with each of their first two being own goals, Borduchi bundling the ball into his own net inside the first three minutes of play. That result means Leverkusen have scored nine goals in their opening three tests, conceding two. Fans will hope to see more of the same in this game, especially in the attack as confidence surges through the ranks.

Dortmund off to a strong start

Followers of Borussia Dortmund have high hopes for the campaign ahead, and fans want to see them make the top four and secure Champions League football. That is the least expected of them, while many more ambitious supporters would love to see their club challenge for the Bundesliga title. A win on Saturday would help them achieve that, but it would also send a statement of intent to the rest of the competition, showing Dortmund have the skills and confidence to take out a rival for the top prize on their own spot. An away win and strong performance would certainly achieve that.

Borussia Dortmund can be found in fifth place with six points gained from their opening three games. Thanks to a stunning 5-2 home victory over Eintracht Frankfurt, they got off to a winning start. The winners made a stunning start and looked to be at their best, while many other teams lacked match sharpness. Reuss scored inside 23 minutes before Hazard, Reyna, and a double from Haaland made sure of the points.

Despite that show of strength, Dortmund lost their second match when going down 2-1 at Freiburg. That was a blow for the team’s confidence as most expected them to build on that stunning opening win, but they did get back to winning ways on matchday three. Dortmund beat Hoffenheim 3-2 before the international break and needed a stoppage-time winner from Haaland to grind out a result. That was a little too close for comfort, but the right team won the points and got their campaign back on track.

This is a meeting of two teams who are expected to be fighting for a top-four finish this season and applying pressure to Bayern Munich. Followers will get a better idea of what to expect from both clubs at the end of this game. Both managers will know what three points could do to their chances of challenging but will also be aware of the damage a defeat would have on their league position.

The team that wins this match is the team that defends better. Both teams have scored in each of the last three meetings, and that makes it attractive to armchair fans, but both managers would be happy with a boring 1-0 victory. The result is far more important than the performance at this early stage of the season, and we may see a tenser match than we are used to when these rivals clash.

Haaland scored a double when the teams last met in a 3-1 home win for Borussia Dortmund. The star attacker already has three goals in three games this season, and he’ll be eager to continue his devastating form in this match. He could prove to be the difference between two clubs that look equal on paper.

The pre-match betting odds available at 22bet has Bayer Leverkusen trading at odds of 3.13 for the win with Borussia Dortmund 2.07 to leave with all three points. The draw is 3.98.

Make sure to bet on Leverkusen v Dortmund with 22Bet!