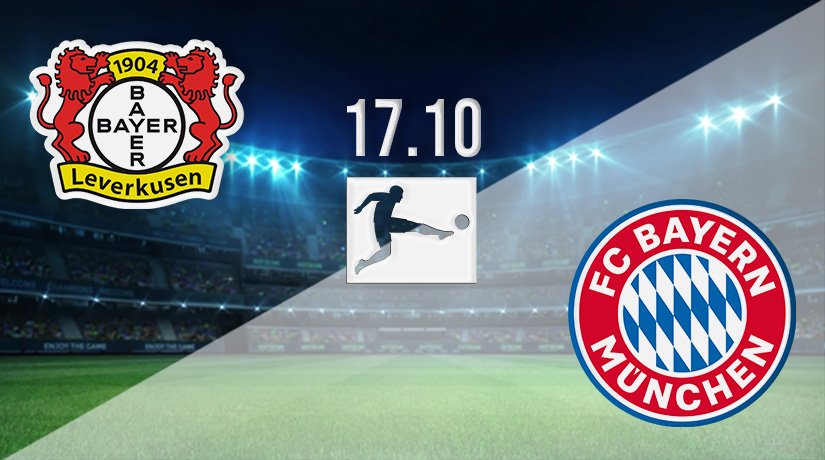 It’s round eight of the German Bundesliga as the table begins to take shape with the league contenders pulling clear of those stuck in midtable and the teams already struggling down at the wrong end of the division. On Sunday, followers of the competition see two teams expected to challenge for the trophy go head to head as Bayer Leverkusen and Bayern Munich meet.

Here we have two of the biggest names in German football and teams that rank amongst the best known on the continent. Bayer holds the home advantage but it’s Munich that starts as favourites with most pundits.

Here we have the top two teams in the division meeting, and the winning of this game will end the weekend in pole position, but which side will grab all three points? There is currently nothing between the pair, with Bayer and Munich locked on 16 points after seven fixtures.

Munich lost their last outing and know another defeat would be a major blow in their title defence, but they face a home team on a fantastic winning run of form, with Leverkusen claiming victory in each of their last three outings. Will that make it four on the bounce at the expense of the champions?

These teams met twice last season on Bundesliga duty, with Bayern Munich claiming a pair of victories. The champions won 2-1 at this venue before easing to a comfortable 2-0 victory at home in April.

Robert Lewandowski has happy memories of this trip as he scored a double here last term and has found the net five times in Munich’s last four games against Bayer. Fans will hope he continues his scoring ways on Sunday.

Bayer Leverkusen has held their own in Europe over the last few seasons but has failed to live up to expectations in the Bundesliga and challenge Bayern Munich’s dominance of the division. That has been a source of frustration for everyone at the club, but as they seem to have the players good enough to be mixing it with the top three teams in the league.

What has let them down in the past has been consistency, with Bayer Leverkusen enjoying a run of strong results but never being able to hold their concentration and continue that in winter when it matters most. Will this season be any different? Fans certainly hope so.

They set up for this home match placed second in the league behind Bayern Munich, only on goal difference. Their stats for the campaign so far read five wins and one draw against a single defeat with 20 goals scored and seven conceded. Those numbers make for interesting reading when taking a closer look.

Bayer has one of the best defensive records in the league and has conceded the same number of goals as the champions, but they have found the net on four fewer occasions, and that gives Munich a slight advantage at this stage. Victory here would overrule that, pushing Leverkusen into pole position.

They arrive on the back of a three-match winning run with a stunning 4-0 victory recorded over Arminia Bielefeld last time. That was a ruthless show of strength from the title challengers and the perfect way to sign off before the international break.

They’ll want to pick up where they left off by claiming a fourth win on the bounce this Sunday, and doing it over the champions would show they are serious about challenging. This is a confident Bayer team capable of scoring goals.

Munich holding onto the lead

Bayern Munich continued their dominance of German football last season, and fans expect them to pick up where they left off this term. Despite controlling the Bundesliga over the last decade, there has been slim pickings in Europe where Bayern Munich have failed to live up to their own lofty expectations in the UEFA Champions League.

That’s something they aim to remedy this season, but a bid to be crowned champions of Europe again doesn’t need to come at the expense of their Bundesliga crown, and the visitors must hold their ground. An away win over a major rival would go some way to helping them achieve that.

Munich are top of the league with stats of five wins and one draw against a single defeat with 24 goals scored and seven conceded. They are the competition’s top scorers and sit four clear of the chasing pack.

They have lost only once, which isn’t a blow to their title ambitions and won’t worry anyone connected to the club but that defeat did come in their most recent match, so the pressure is on to bounce back. Titles aren’t won and lost with the result of a game or a defeat. Success depends on how a team responds, and Munich will want to get back on track at the first opportunity.

The spare loss was inflicted just before the international break, and it came in the form of a loss at home to Eintracht Frankfurt. That game finished 2-1 to the visitors and was a huge upset, especially as Frankfurt had been written off by just about every follower of German football before the start.

Munich took the lead that day through Goretzka, but Eintracht refused to roll over, getting level on 32 minutes before scoring a dramatic winner on 83 minutes to cause the shock result of the weekend.

The winner of this match won’t be handed the Bundesliga trophy, but three points here would draw first blood in what should be a competitive battle for the title. Bayer Leverkusen holds the home advantage and boasts the better recent form of the two teams. They must be at their best if they want to continue their winning ways.

Bayern Munich dropping to defeat at home last time would have hurt everyone connected to the club. They are good enough to bounce back, and if they were to do that against their nearest rivals for the top spot in the league, it would be a major confidence boost for the squad.

Make sure to bet on Bayer Leverkusen v Bayern Munich with 22Bet!