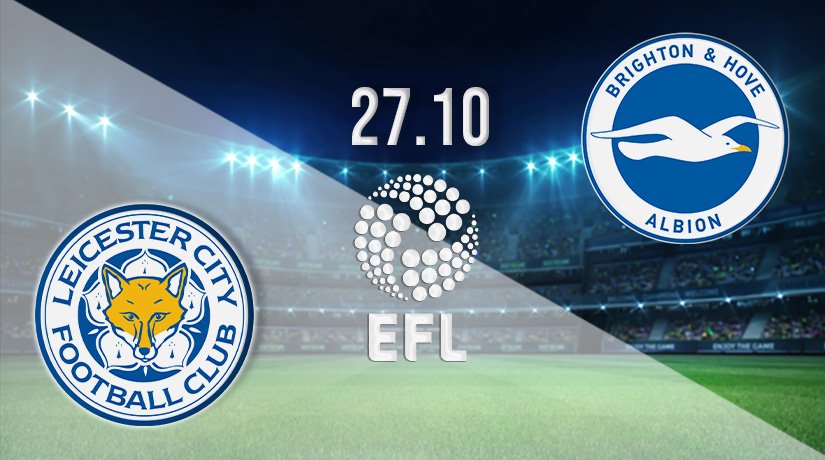 There will be an all Premier League clash in the round of 16 of the EFL Cup on Wednesday, as Leicester City take on Brighton at the King Power Stadium. The Foxes will be looking to add to their trophy collection after winning the FA Cup at the end of last season.

There should be an interesting game at the King Power on Wednesday evening, as two sides that like to play on the front foot meet in the East Midlands. Leicester will be the hosts, as they look to add to the FA Cup and Community Shield honours that they have won over the past 12 months.

Leicester will certainly be the favourites with the bookies, but Brendan Rodgers is likely to rest some of his bigger stars, as the Foxes have huge games in both the Premier League and Europa League over the next eight days.

Leicester have played only one previous game in the EFL Cup, as they saw Millwall off in the third round. Ademola Lookman and Kelechi Iheanacho scored second half goals in that victory over the Championship side.

Brighton entered the EFL Cup in the second round, and a domestic cup success this season will ensure that Graham Potter is immortalised forever at the Amex Stadium. The Seagulls have seen off two Championship sides in the previous two rounds.

Brighton beat Cardiff in the second round, before beating their Welsh rivals Swansea in the most recent fixture that they played. Both wins were 2-0 successes, with Aaron Connolly scoring two first half goals in the third round victory over Swansea at the Amex.

Leicester vs Brighton Head to Head

This will be the fourth different competition that Leicester and Brighton have met in since 2008. Leicester have won six of the nine meetings in the Premier League, while Brighton won three of the six meetings in the Championship. The only FA Cup meeting between the sides was won 1-0 by the Foxes last season. However, Brighton did pick up a 2-1 meeting in the first meeting between the sides in the Premier League this season.

Cases can be made for both Leicester and Brighton to progress from this tie. We like the chances of the visitors, as Potter will name a near first choice line-up, while the Foxes will rest many of the big hitters.

Make sure to bet on Leicester vs Brighton with 22Bet!