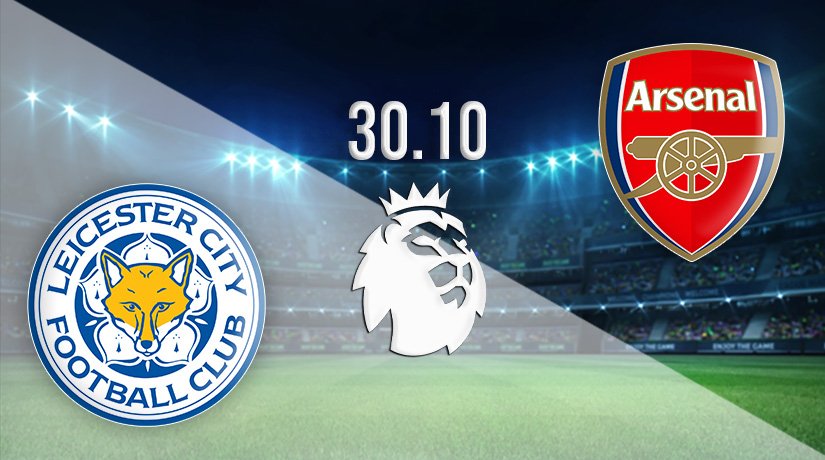 Nine matches into the season, Leicester and Arsenal are level on 14 points, occupying the 9th and 10th positions respectively on the table. Jostling to get into the coveted European places, the two teams lock horns on Saturday at the King Power Stadium at 12:30 GMT.

Both teams are looking to gain three points and bolster their form after early-season slip-ups led to their slides down the table.

Arsenal’s Resurgence after a Horrible Start to the Season

After a nightmare start to the season with three straight defeats, Arsenal have experienced a resurgence with four wins and two draws in their last six matches.

The change for the Gunners has been in defense. While they conceded 9 goals in the first three matches, they have conceded just four in the last six.

This turn in defensive solidity will be crucial when facing Leicester and the danger posed by the striker partnership of Jamie Vardy and Kelechi Iheanacho.

Last time out, Mikel Arteta’s men responded perfectly to the two points they previously dropped at the Emirates Stadium against Crystal Palace in the 2-2 draw by beating Aston Villa 3-1.

Leicester’s form in the season so far has been inconsistent at best. Given their stated goal of chasing Champions League places, the Foxes have to start winning matches consistently soon.

In their last two matches, the Foxes have beaten Manchester United 4-2 at the King Power Stadium and defeated an impressive Brentford side 2-1 at the Brentford Community Stadium.

The Foxes welcome the Gunners to King Power during a purple patch period. The Leicester forwards have no trouble scoring, and their midfield players are dominating matches.

Over their last five outings in all competitions, Leicester have won three, drawn one, and lost one. In this run, they have scored 12 goals while conceding nine goals.

Arsenal won three and drew two of their last five while scoring 11 goals and conceding four.

The statistics indicate that Arsenal have tightened their defense over the last five matches conceding just four, while Leicester have some work to do to cut off the chances and goals they are conceding.

There is no difference in terms of the output of the attacks of these two teams, with the difference being a solitary goal over the last five matches.

The fixture pitting Leicester and Arsenal has had 20 outings in the league, with Gunners winning 11 and the Foxes emerging victorious 4 times; the remaining five have been draws.

In this run, Leicester has had three home wins to Arsenal’s seven, whereas the Foxes have had one away win to Arsenal’s four.

There have been two wins apiece and one draw in the last matches that they have contested against each other. The last time the teams met – on 2nd February 2021, Arsenal ran away 3-1 winners.

In their stellar win against Aston Villa, Arsenal had to substitute Lacazette and Aubameyang with injury concerns. There is an expectation that these two will be passed fit to face the Foxes at the King Power Stadium.

Granit Xhaka is out with a knee injury. Although he is making considerable progress in recovery, the Leicester match is expected to come too soon for him to feature.

The scoring return of Thomas Partey in the match against Aston Villa is a massive boon for manager Mikel Arteta in his pursuit of midfield ballast, especially when coming up against Leicester’s in-form man Tielemans and former Arsenal target James Maddison.

The main worry for Brendan Rodgers is the fitness of central striker Jamie Vardy after he was substituted at halftime with a strain in the win against Brentford.

Vardy is a crucial cog of the Foxes’ chances of winning matches. His pace, pressing, and goals are essential tools for Brendan Rodgers to use against the Gunners.

The other injuries for Leicester include Wesley Fofana, Nampalys Mendy, and James Justin.

The midfield battle will be important in this match. Whichever team prevails in the engine room will likely have a better platform to win all three points.

Tielemans has been operating at a very high level this season. He has added important goals to his game in recent matches with vital strikes against Manchester United and Brentford.

Up against the Gunners’ midfield duo of Lokonga and Partey, Tielemans will play a crucial role in pressing, winning possession high up the pitch, and feeding Maddison, Vardy, and Iheanacho to pressure the Arsenal rearguard.

After early criticism, mainly centering on his price tag, Ben White is emerging stronger and poised to lead the Arsenal defense for years to come.

The Gunners have set about tightening up at the back and creating the bedrock upon which they have built their good run of form. At the center of this turnaround is Ben White.

He will be important, once again, as Mikel Arteta seeks to keep out Vardy and Co. and boost his climb up the table as the English Premier League kicks into high gear.

Arsenal’s recent upturn in defensive solidity and midfield bite will help them contest against a high-energy side.

Leicester’s two strikers offer them potency up front, but they need to ensure they do not concede early, given Arsenal’s newfound ability to grind clean sheets.

Given the balance of the teams in terms of quality and form, this will be an evenly contested match that will end in split honors at the King Power Stadium.

Make sure to bet on Leicester vs Arsenal  with 22Bet!