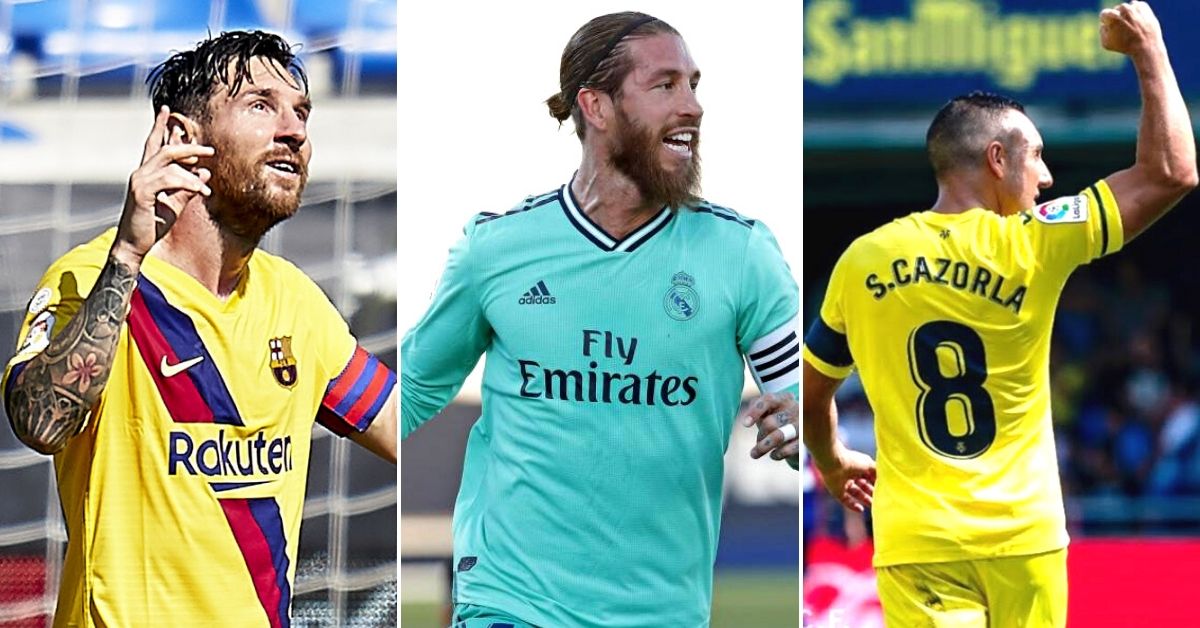 This Sunday marked the final day of the 2019/20 LaLiga season and although Real Madrid have already been crowned champions of Spain for the 34th time in the club’s history, there was still plenty to play for.

A thrilling round of action to end a thrilling #LaLigaSantander season! 🍿🌟 pic.twitter.com/bzBfYVFnv2

LaLiga winners for each of the past two years, Barcelona had to surrender their crown to Real Madrid this season and took out their anger on poor Deportivo Alaves by thrashing the hosts five goals to nil.

Lionel Messi & Co reminded everyone why they remain the most watchable team in Spain after they finally rediscovered their rhythm, pace, and pure artistry of the game. A double from Messi and further goals from Ansu Fati, Luis Suarez and Nelson Semedo did the damage at Mendizorroza on Sunday evening.

No big deal, but Messi set two new LaLiga records on the same day. The Argentinian star registered an assist against Alaves, taking his tally to 21 for the season – overtaking Xavi to set a new La Liga record. And as if that wasn’t enough, Messi also scored his 24th and 25th league goals of the season, which means he now has over 25 LaLiga goals for 11 consecutive campaign – also a record. He will also clinch his 7th Pichichi Trophy this season – the most in history. Take a bow, Leo.

Villarreal clinched a spot in next season’s Europa League after crushing Eibar 4-0 in an emotional evening as Santi Cazorla and Bruno Soriano made their final appearance for the club.

Following two consecutive defeats, their place in Europe was under threat but triumph on the last day of 2019/20 LaLiga season secured their place.

33 – @Eng_Villarreal's Santi Cazorla has been involved in more goals than any other midfielder in @LaLigaEN since the start of last season (33 – 15 goals and 18 assists). Farewell. pic.twitter.com/JQ7KnFcHZq

It took the hosts 72 minutes to get the opener, which came through Anguissa thanks to a Cazorla assist. Moreno made it two up in the 86th minute and three minutes later he completed his brace, which was immediately followed by Moi Gomez’s strike to seal the final score.

Villarreal finish the season in fifth place, with 60 points, whilst Eibar are 14th, with 42.

Real Madrid failed to finish the season on a Champions-like high as they traveled to the Butarque for a two-all draw on Sunday night.

The hosts stood their ground in this dramatic, future-depending clash, but alas, it wasn’t meant to be and Leganes were relegated following tonight’s battle against Zinedine Zidane’s side.

There is nothing to say right now. We would like to bring you a smile but right now we can't. Thank you for being with us on an amazing journey in @LaLigaEN

Sergio Ramos recorded his 11th goal of the season with an early header before Bryan Gil equalized for the hosts. Marco Asensio gave Real Madrid the lead minutes after the break and Roger Assale set up a grandstand finish to make it two-all.

Leganes were in desperate need of a win on Sunday and were unlucky when a late VAR check ruled out a possible penalty minutes before the end of the game.

Having won three of the four matches ahead of Real Madrid’s visit, Leganes ultimately fell short of the three points needed to frog leap Celta Vigo, who drew with Espanyol. They finished the season in 18th place, with 35 points, just one behind Celta. Farewell, Leganes, it’s been a pleasure.

HIGHLIGHTS | @CDLeganes_en fought until the end against champions Real Madrid, but couldn't get the win they needed. 🥒

Contrary to our prediction, Atletico Madrid drew Real Sociedad 1-1 in a thriller clash at the Wanda Metropolitano. The hosts, who were still missing their starlet Joao Felix, opened up the scoreline thanks to Koke’s superb close-range finish 30 minutes in. They looked on course for victory to conclude their season but Real Sociedad did not surrender easily.

1 – Atlético de Madrid have just lost one out of their 16 #LaLiga games without Joao Félix as starter (W7 D8). However, they have a better win percentage with him (52,4%) than without him in the XI Starting in the competition (43,8%). Bench#AtleticoMadrid pic.twitter.com/DWeJHRBohb

The visitors recorded more shots (9) on target (4) compared to Atleti’s six to three respectively and finally, just three minutes before time Adnan Januzaj’s stunning curling free-kick saw them fight back to a draw.

The single point was enough for Atleti to claim the third spot on the LaLiga table and secure their place in 2020/21’s Europa League, and Sociedad finished in a proud sixth position, with 55 points.

Just as we predicted, Sevilla wrapped up their season with a win thanks to a single goal by Sergio Reguilon against Valencia on Sunday. They finished 2019/20 in fourth place, with 67 points, whilst the visitors are in eight, with 53.

Contrary to what we had planned for the final score, Granada thrashed Athletic 4-0 and will play in European competitions for the first time in the club’s history. Levante beat seventh-placed Getafe with a single goal by Coke in the last seconds of play, whilst Osasuna and relegated-Real Mallorca reached a two-all draw in a thriller clash at El Sadar.

🎭 Drama right up until the last moment! pic.twitter.com/PHRpuGphMM