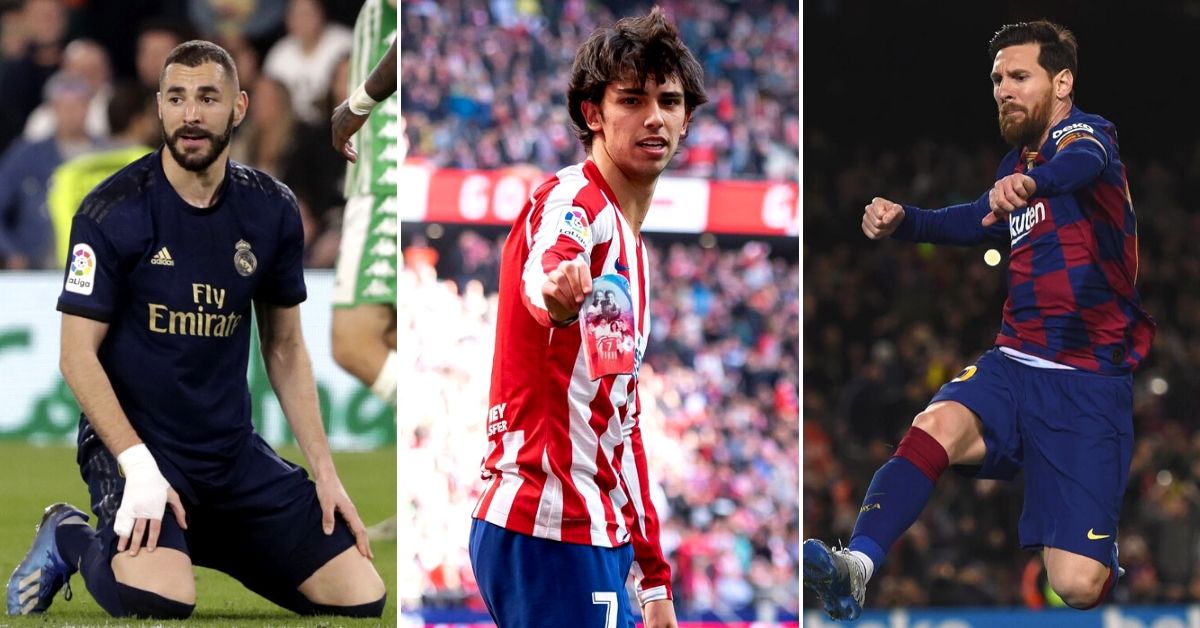 Red cards, penalties, VAR drama and much, much more! Here is the final table and a quick round-up from matchweek 27 in La Liga:

Atleti hosted Sevilla in an exhilarating two-all draw at Wanda Metropolitano this Saturday, recording the 50th draw between the two sides, more than any other fixture in the competition’s history.

Check out how close our prediction for this clash was.

Luuk de Jong opened up the scoresheet for Sevilla just 19 minutes in with a cool finish inside the box, which shifted Atleti’s defense out of shape. VAR made a big appearance when both sides were awarded a penalty before the break. Alvaro Morata scored Atleti’s to level with Sevilla in the 32nd minute and just four minutes later Joao Felix netted a deflected strike to put the hosts ahead.

Their lead was shortlived as Sevilla were given a penalty just before the break when club hero Lucas Ocampos was tackled in the box by the finally-back Kieran Trippier, and Ocampos equalized with a superb kick from the spot.

Special shout-out to Ocampos, who is just pure fire. He has now scored ten La Liga goals for Sevilla this season, more than any other Argentinian player in the club in a single campaign this century.

Sevilla remain third with 47 points, whilst Atleti trail in 5th place with 45, just behind Getafe.

Just as we predicted, Barca are back on top of La Liga table after cruising past in-form Real Sociedad one goal to nil at Camp Nou this Saturday. La Real gave the hosts a real battle until the 80th minute when Lionel Messi converted a controversial penalty to seal their win.

3 – Players with the most penalty goals in @LaLiga history:

The game saw numerous missed chances from both teams and just as Real Sociedad seemed the more likely side to score, VAR made an appearance once again and threw Barcelona a crucial lifeline.

Robin Le Normand tried to clear the ball with his head, but instead, the ball landed on his arm and after an agonizing VAR review a penalty was awarded to the hosts. Messi cooly converted from the spot to give Barcelona a much-needed triumph that placed them two points ahead of their arch-rivals Real Madrid, who are down to second place.

Messi’s goal on Saturday is one to remember. Thanks to his penalty strike the Barcelona legend has become the all-time top goalscorer in the top five European leagues (438 goals in 474 appearances), surpassing Cristiano Ronaldo (437 in 540).

Zinedine Zidane came under fire after Real Madrid’s shock 2-1 defeat to Real Betis on Sunday, forcing the visitors to give up the top spot on the table and placing them two points behind leaders Barcelona.

Against all odds, Isco-less Real Madrid were all over the place in a crucial La Liga race clash, which gifted us with an absolute thriller at Benito Villamarin. The hosts built up a string of attacks and a goal seemed inevitable. So when a challenge occurred on the border of Madrid’s penalty area it was like the visitors stopped the game, meanwhile, Betis’ Sidnei found an opportunity and netted a wonder-strike past Thibaut Courtois.

💚⚪💚 Por esto somos del #RealBetis. — This is why we are #RealBetis fans.

A few minutes later Madrid were awarded a penalty thanks to VAR and Karim Benzema equalized just before the break. He has now scored all his nine penalty shots for Real Madrid in all competitions but went from hero to zero as his error in 82nd minute lead to Cristian Tello’s winner. Here is a mind-blowing stat: Benzema has made his first error leading to a goal in 338 La Liga games for Real Madrid.

The triumph for brilliant-Real Betis was absolutely deserved and nobody should argue that. They even had a clear chance that was painful to watch, with no goal:

No goal from this situation. pic.twitter.com/8u7L3CE9Il

Real Madrid are back down to second, and if they continue with this lack of quality and fit players they might not ever leapfrog Barcelona again this season.

Getafe drew 0-0 with Celta Vigo in a critical clash in the fight for a Champions League spot. Valencia have gone down to seventh place with 42 points after drawing with Alaves one goal each. Leganes beat Villarreal 2-1 in a bid to save themselves from relegation.

That’s it from La Liga’s matchweek 27. Here are all of the results from this weekend and we will see you again next week! Make sure you bet with 22bet!