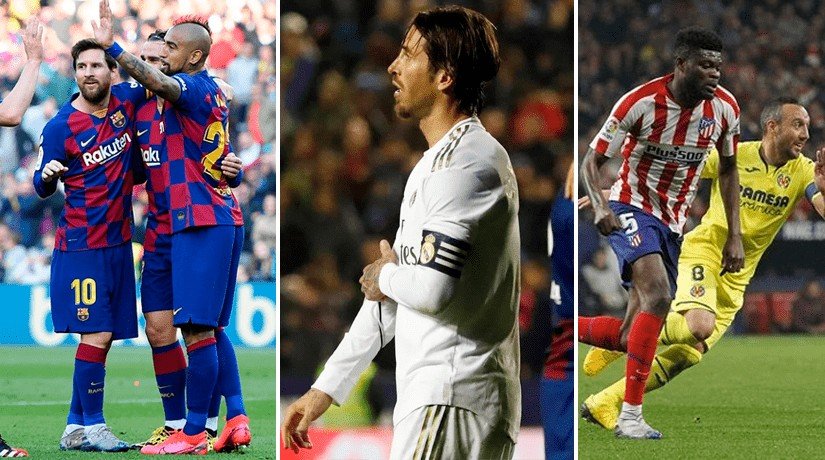 What a weekend in Spain! Sevilla overtook Getafe in a crucial game that helped them clinch fourth place, Real Madrid produced a shock result in Leganes and Lionel Messi is officially back! Here are all of the results from match week 25:

Let’s be honest, Barcelona had their first decent match under Quique Setien this Saturday, when they thrashed Eibar five goals to nil at Camp Nou. It’s a victory that he, himself described as ‘necessary’ – not just for the club but also for the fans.

Lionel Messi, who has been assisting everyone this past couple of months, is finally back to his scoring ways as he netted four goals this weekend. Not that he was the only star of the show; Barca keeper, Marc-Andre ter Stegen saved the day more than once to keep a clean sheet for his side.

40′ – Only vs Mallorca in October 2011 Lionel Messi scored an earlier hat-trick (30′) than today’s game vs Eibar (40′) in his professional career. Rush@FCBarcelona #LionelMessi #LaLigaSantander pic.twitter.com/YotjADSqf3

And we couldn’t miss mentioning Martin Braithwaite. Shout out to the 28-year-old for his fantastic Barcelona debut. Braithwaite, who completed his move from Leganes earlier this week, came off the bench in the 72nd minute to replace Antoine Griezmann and ended up assisting the final two goals in Barca’s 5-0 triumph over Eibar. Great work, Martin!

Barcelona are first on the table with 55 points, whilst Eibar sit on 16th, with 24 points.

Against all odds, Real Madrid lost away to Levante by one goal to none and vanquished the first spot on the La Liga table. Morales gave Levante their unforgettable triumph in the 79th minute with an absolute belter of a goal – have a look below. With this goal, Morales has ended his second-worst streak without scoring in LaLiga (21 games in a row since August 2019).

It doesn’t help that Eden Hazard leaped off the pitch with a fresh injury that “doesn’t look good”, confirmed Zinedine Zidane after the match. The Madrid camp blames refereeing decisions for their failure to win at Levante, but those excuses won’t help them next week when they face bitter rivals Barcelona in the second Clasico of the season.

12 – Real Madrid have made 12 total shots vs Levante in the first half, more than any other single game away from home at the half time in all competitions this season (level vs Barcelona at Camp Nou in #LaLigaSantander). Persistence#RealMadrid pic.twitter.com/HS3KUYNGV8

Sevilla leapfrogged into fourth place after beating Getafe 0 – 3 on Sunday. Julen Lopetegui’s men got the opener from Lucas Ocampos just before the half-time break, then midfielder Fernando doubled the lead for the visitors in the 67th minute before setting up Jules Kounde for the winner eight minutes later.

Sevilla, who won their first game since January in all competitions, gave Getafe a taste of their own medicine – pressuring the hosts with solid defense, and producing clinical finishing converted into goals. Sevilla are now fourth on the table with 43 points and Getafe are fifth with 42 points.

3-0 – @SevillaFC_ENG‘s 3-0 win has been the biggest margin of victory in @LaLigaEN under Julen Lopetegui. Getafe’s 0-3 defeat has been the joint-biggest margin of defeat in the competition under Bordalás alongside vs Real Madrid last January. Bulky#getafesevilla #LaLiga pic.twitter.com/B8n8K00ntg

Atleti seem to have sprung back to life after beating Liverpool in the Champions League earlier in the week. They overcame Villarreal 3 – 1 at the Metropolitano on Sunday night and reminded everyone of the team we’re used to seeing than the one we’ve been getting these past weeks.

Villarreal took the lead thanks to a Paco Alcacer goal in the 16th minute, but Atleti hit back with strikes from Angel Correa, Koke, and Joao Felix, who played his first game back after a hamstring injury. England international Kieran Trippier also made his return for Diego Simeone’s XI for the first time since the beginning of January. Atletico Madrid are third on the table with 43 points (ahead of Sevilla on goal difference), whilst Villarreal are seventh, with 38 points.

2 – Two different players have scored & assisted both in a single game at Wanda Metropolitano in @LaLigaEN for the first time ever: Ángel Correa & Koke Resurrección. Combined#Atletico #LaLigaSantander pic.twitter.com/BAbiNpDIYT

Real Sociedad jockeyed Valencia 3 – 0 to keep up with the Champions League race. Valencia, on the other hand, are suffering from inconsistent performances again, having let seven past in this last week. Real Betis drew Mallorca in a six-goal thriller and Granada thrashed Osasuna away by three goals to none.

Here are the final table standings after match week 25 in La Liga. See you next weekend for another Clasico! Make sure you bet with 22Bet!