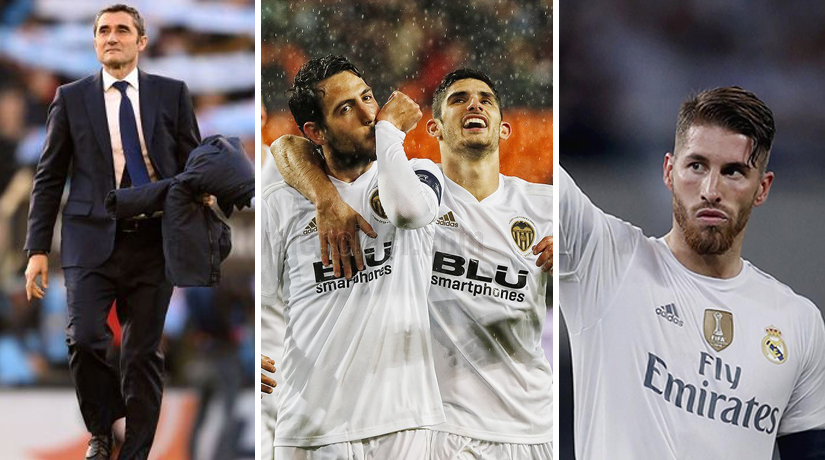 Celta and Real Valladolid opened this week’s La Liga fixture as the hosts hoped to gain three points for their relegation battle cause. However, it wasn’t meant to be in an underwhelming showing from both sides, in a match that ended 0-0 as Masip between the posts was brilliant for Valladolid.

Saturday matches made up for Friday bore as Real Madrid opened the day by beating Deportivo Alaves 2-1 away, with the defenders shining as Ramos scored first, and after Lucas Perez tied the score, Dani Carvajal stepped up to take all three points to Madrid. Los Blancos still regret leaving Martin Odegaard to go out on Real Sociedad loan, and he just proved them wrong once again by putting in a brilliant performance in a 4-1 La Real win over Eibar, with the Norwegian both scoring and assisting.

Betis traveled to an island to face Mallorca and it looks like Seville side is recovering as they took the three points away with goals from Joaquin and Nabil Fekir. Lago Junior showcased his talent once again, scoring a solitary goal for Mallorca in Betis’ 2-1 win.

In the delightful matchup between Valencia and Villareal at Mestalla, the hosts managed to scrape up three points. Rodrigo Moreno scored just his second goal this season from a beautiful Maxi Gomez assist. However, André-Frank Zambo Anguissa tied the match just five minutes later. The 19-year-old Ferran Torres decided the duel with a solid goal, confirming the big win for the Bats.

Sevilla stayed just a point off of the leading duo with a 1-0 win against Leganes on Sunday. Diego Carlos was the unlikely hero for Julen Lopetegui’s team. Soon after, Athletic Bilbao also continued their great run, noting a 2-0 win over Granada with goals from Raul Garcia and Yuri. This saw the Basques rise all the way to the fourth in the league table.

Back in Barcelona, Osasuna beat Espanyol 4-2 away in a match that will be remembered by some awful reactions from the Espanyol defenders, leading their opponents to easy goals, resulting in yet another defeat and 19th place in the league table for Espanyol.

And, on Sunday evening, there it was – the most anticipated matchup of the weekend. Wanda Metropolitano hosted the clash of Atletico Madrid and Barcelona. The home side started strongly, creating opportunities at the beginning, but Marc-Andre Ter Stegen proved vital for Blaugrana yet again, making a couple of unbelievable saves.

The Catalans took control of the match around the 30th minute, even though they didn’t create a lot. Despite the matchup being mostly even, Lionel Messi was the difference yet again. He took the ball in the opposition half with Atleti’s defense spread all over the pitch. A couple of dribbles, a simple give and go with Suarez, a shot, and Lionel Messi was already celebrating Barcelona’s win, which put them at the top of La Liga, crowning his big Ballon d’Or triumph in the most spectacular way.

Make sure to bet on La Liga matches with 22Bet!