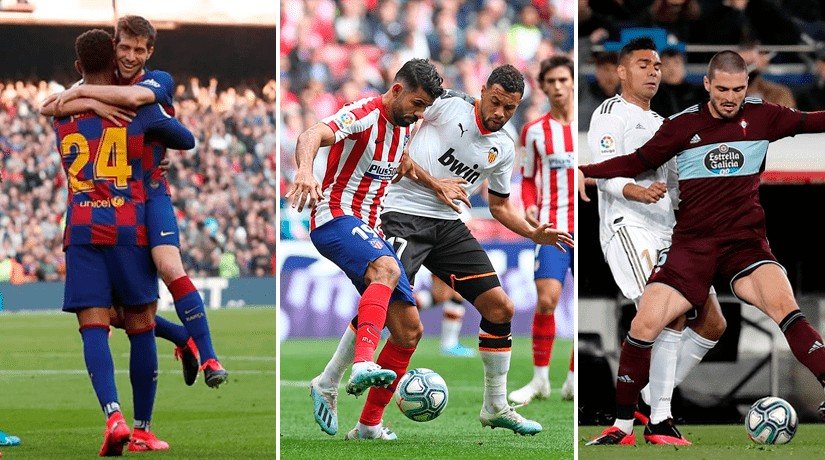 Third and fourth-placed Barca and Getafe clashed at Camp Nou this Saturday in a game that saw the hosts fight back for a second goal to claim the crucial victory.

On his 350th official appearance in Camp Nou, the crowned king-of-assists Lionel Messi was having another of those goalless nights, but that’s okay, now he just sets everyone else up for success. Antoine Griezmann opened the scoreline in minute 33, ending his five-match scoreless streak that truly had us worried. Six minutes after Griezmann’s goal, Sergi Roberto doubled Barca’s advantage before half-time.

And then, just as we thought the game was lacking imagination and ingenuity, Getafe’s Angel Rodriguez produced a sensational finish, leaving Marc-Andre ter Stegen completely stunned.

69 – Marc-André Ter Stegen has attempted 69 passes today more than any other LaLiga goalkeeper in a single LaLiga game since 2005-06 season. Buoy. pic.twitter.com/mAT9H471pE

Speaking of the devil, Ter Stegen denied Getafe a tap-in with little time remaining, and although Griezmann and Messi blundered three great chances, the Catalans should thank their brilliant goalkeeper for claiming the three points.

What a captivating game of Tug of War! Marcos Llorente put Atleti ahead after 15 minutes when he blasted home from close range, but Gabriel Paulista’s equalizer came a mere three minutes later.

Diego Simeone’s men went ahead again thanks to Thomas Partey’s insane low strike from 20-yards out just before half-time but Valencia’s Geoffrey Kondogbia got a ball past Jan Oblak in the 59th minute to level again.

“We understand in the world of football when you’re on a bad run, doubts appear, questions appear, when you win three or four in a row it all disappears,” said Llorente after the game.

1 – Thomas Partey has scored the first @Atleti‘s goal from outside box in #LaLigaSantander this season. Only Watford & Crystal Palace are the only teams to have failed to score it in the Top 5 European Leagues. Lash@LaLigaEN #ValenciaAtleti #AtleticoMadrid pic.twitter.com/AkO78QTiet

Sixth-placed Valencia came out of this game feeling great, with the draw putting them on 38 points, whilst Atleti are in fourth with 40. Simeone and his men (including Alvaro Morata) host Liverpool in the Champions League this Tuesday. What are your predictions?

26 – Real Madrid attempted 26 crosses in the first half against Celta de Vigo (6 completed, including corners), more than in any other game in all competitions under Zinedine Zidane. Emergency. pic.twitter.com/KrGN6Xkw3a

Everything looked like it was back to normal thanks to a Toni Kross strike and a Sergio Ramos penalty (won by Eden Hazard) in the second half. But the Celticos had other plans. Ex-Barca midfielder Denis Suarez set up Santi Mina to equalize five minutes before the final whistle, leaving Real Madrid just a point ahead of Barcelona, instead of three.

🇩🇪🎯 @ToniKroos has scored in each of the last SIX years against Celta in #LaLigaSantander!#RealMadridCelta pic.twitter.com/odqBJlLZiq

Sevilla missed the chance to move into Champions Leauge spot on Sunday as they drew 2-2 with rock-bottom Espanyol, who were playing with ten men for the last 20 minutes of the game.

Eibar vs Real Sociedad was postponed due to “high levels of chemical compounds detected in the air” – explained the Basque deputy minister for health. Wait. Whut?

Here is how the La Liga table looks after this matchweek! See you next weekend, make sure you bet with 22Bet!