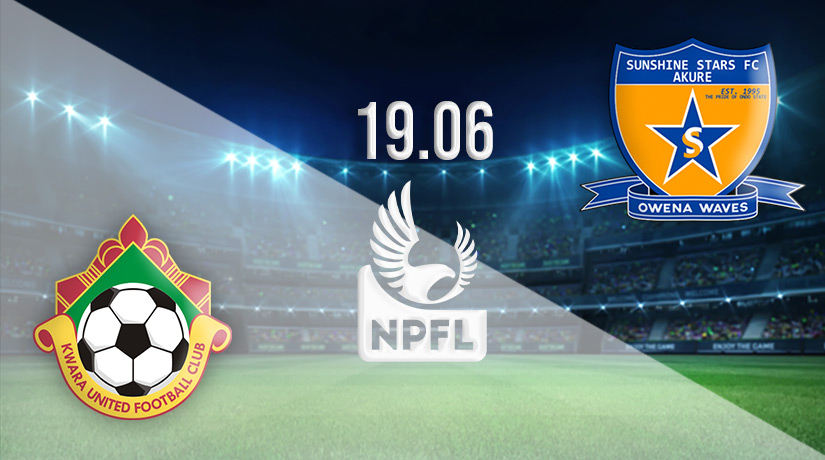 It is sixth versus seventh in the NPFL as Kwara United host Sunshine Stars at the Kwara State Stadium on Sunday at 16:00GMT as both teams vie to climb the table and finish as high as possible in the remaining six matches of the season.

Can Kwara United Bounce Back to Winning Ways against Sunshine Stars?

Kwara United have amassed 49 points with six matches remaining in the season; they are just two points behind third-placed Enugu Rangers and fourth-placed Enyimba.

They will be looking to bolster their points tally in the run-in as they seek to finish as high on the table as possible.

Kwara United will need to bounce back to winning ways after the disappointing 3-0 reverse against Enyimba in their last NPFL outing.

Their task will not be made easy by the fact that they are facing an in-form Sunshine Stars side that has won the last two matches and lost once in their last five.

Can Sunshine Stars Extend their Winning Run to Three Matches in the League?

Sunshine Stars will be looking to extend their two-match winning run to three when they travel to face Kwara on Sunday.

With 48 points on the table, Sunshine Stars know that they are within striking distance of third-place in the NPFL with the gap currently standing at three points. A defeat could also see Sunshine drop 9th on the table.

The clash with Kwara United is important because Sunshine have not won away from home in their last five matches in the NPFL; the last two away matches have ended in a draw (0-0) and a defeat (3-0) against Enyimba.

Kwara United have won just two of their last five outings in the NPFL; they have hauled six points and dropped nine in this run, which has seen them lose ground with the top half of the table.

The two Kwara United wins in the last five outings have come in fixtures at home against Akwa United (1-0) and Katsina Utd (2-0).

This means that the three losses have come in away matches against Gombe United (4-2), Lobi Stars (3-1), and Enyimba (3-1). In these three away matches, Kwara United has scored 4 goals while conceding 10, which underscores their challenge.

Sunshine Stars have lost just once in their last five outings in the league. They have won three times, drawn once, and lost once in this run; they have collected 10 points and dropped five in the process.

All the three wins for Sunshine Stars have come in home matches against Niger Tornadoes (2-1), Nasarawa United (2-1), and Katsina Utd (2-1). Sunshine Stars have kept a single clean sheet, scored six, and conceded three in this run of three home wins.

In their last two away matches, Sunshine Stars have lost one against Enyimba (2-0) and drawn the other against Lobi Stars (0-0).

Given their away form, the team will have to bolster their performance in the clash with Kwara United away from home to stand a chance of getting a favourable result.

Dabani has 7 goals and 3 assists in 25 appearances for Kwara United this season. He has been in the starting 11 in 83% of the matches while playing 72% of all the team’s minutes of action this season.

The statistics show that Dabani is one of the most important players for Kwara United, and he will be crucial in the clash with Sunshine Stars on Sunday.

The 30-year-old forward provides the experience and calmness for Sunshine Stars in the attacking areas while instilling the team with confidence with his work rate and hard running.

His pressing is also important in disrupting the opposition and enabling his team to win possession higher up the pitch.

Emmanuel will be crucial in the clash with Kwara United on Sunday.

Kwara United will seek to dominate the ball and set the tempo from the start with hard running and pressing.

Sunshine Stars will seek to close down all spaces behind their defence and focus on counter-attacking and set-pieces as their best way of creating chances and scoring.

The match will end in a draw given the prevailing form of both teams in the league.

Make sure to bet on Kwara United vs Sunshine Stars with 22Bet!