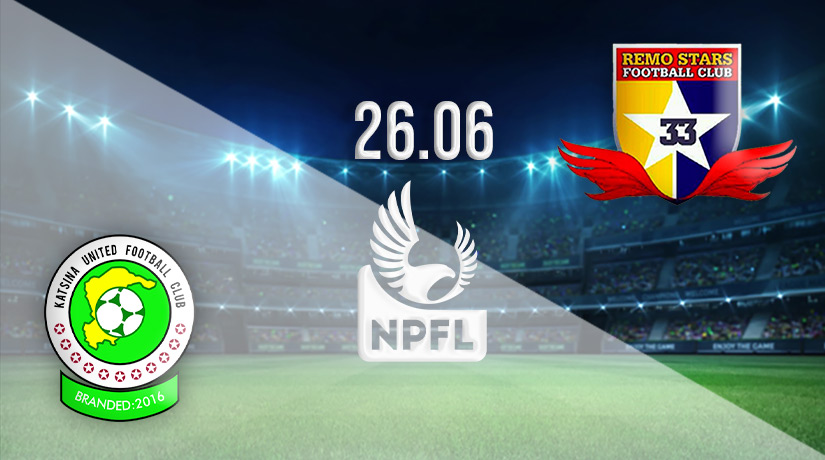 Relegation-threatened Katsina Utd will look to get back to winning ways in the NPFL when they host third-placed Remo Stars at the Muhammadu Dikko Stadium on Sunday at 16:00GMT as both teams look for a momentous ending to the season.

Can Katsina Get Back to Winning Ways by Beating Remo Stars?

Katsina Utd will be looking to bounce back from the 1-0 loss they suffered last time out in the league at the hands of Heartland when they face Remo Stars on Sunday.

Having kept a single clean sheet in their last five matches, Katsina will be looking to tighten their rear guard when they face Remo Stars as they look to bolster their chances of avoiding relegation with four matches remaining in the season.

Playing at home, the relegation-threatened Katsina will be looking to leverage home advantage to beat Remo who have been among the best top three teams in the league this season given their points tally placing them third on the table.

Can Remo Stars Hang on to Third Place with a Win Over Katsina Utd on Sunday?

Remo bounced back from the 1-0 defeat to Akwa United with a convincing 3-1 win over Lobi Stars last Sunday. They will be looking to extend this renaissance when they visit Katsina Utd this Sunday as they look to hang on to third place on the table.

Remo Stars are just a point ahead of Enugu Rangers and Kwara United with 52 points each on the log.

With four matches remaining this season, Remo Stars go into the weekend understanding that a loss could see them drop to 5th on the table, or even below Enyimba in 6th, who have 51 points (two behind Remo Stars).

The focus for Remo will be retaining their position on the table in the run-in starting with the clash with Katsina Utd on Sunday.

Katsina have won just two matches out of their last five outings in the league; they have also lost three times in this run. Overall, they have collected six points while dropping six as they have struggled to move towards safety from relegation in the run-in.

In this run, Katsina have scored four goals while conceding six. This deficit highlights why they have dropped nine points while picking up just six as they fight for survival in the league for next season.

With the fight to avoid the drop being a two-point affair, Katsina will be looking to take maximum points from their remaining four matches starting with the clash against Remo Stars.

Remo Stars have won twice, drawn once, and lost twice in their last five NPFL outings. They have collected 7 points and dropped 8 in this run.

This run of form has seen them fall behind in the title race as league leaders have opened up an 18-point gap with second-placed Plateau Utd being 8 points ahead.

The two wins for Remo Stars came against Gombe United (1-0) and Lobi Stars (3-1). The one draw in this run came in the clash with Shootings Stars, which ended in a 1-1 result and shared points for the teams.

The two defeats for Remo Stars came in matches against Kano Pillars (3-1) and Akwa United (1-0).

The wide forward, who predominantly plays down the right-hand side of Katsina’s attack, has made 20 appearances this season during which he has grabbed 7 goals and 1 assist.

Madaki will be crucial for Katsina as they fight t survive in this season starting with the clash with Remo on Sunday.

The striker is crucial for Remo’s chances of taking all three points this weekend.

Katsina will be looking to frustrate Remo Stars for long periods of the match with a solid and compact approach denying them space.

Remo Stars will look to be patient and intentional in their passing and build-up seeking to break down the Katsina defensive low bloc.

A draw is the likely result in this match given the current form of the two teams.

Make sure to bet on Katsina Utd vs Remo Stars with 22Bet!