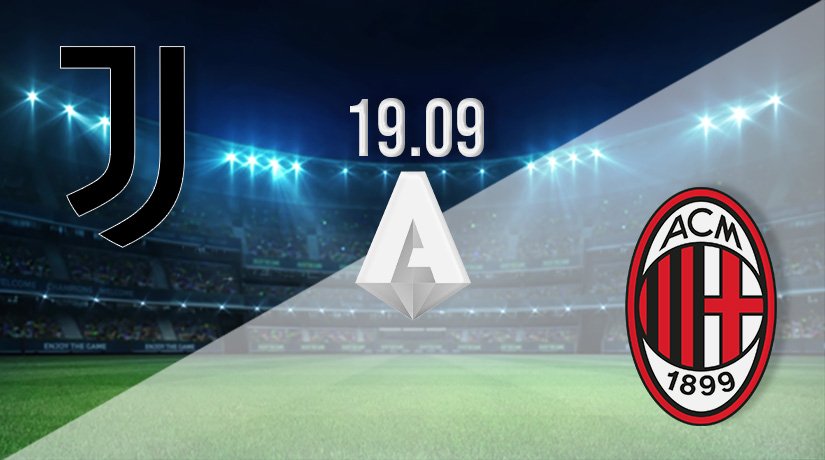 Serie A fixtures return this weekend and bring with it a feast of live TV matches. It’s a busy schedule for armchair fans planning to follow the play. There is at least one match being played every day from Friday through to Sunday but the one that got our attention is scheduled for a Sunday 19:45 GMT start when Juventus host AC Milan.

This is a huge fixture for both clubs as the Old Lady enjoy home advantage while trying to bounce back from the disappointment of losing their title last term to Inter Milan. Juve was rather fortunate to snatch a top-four finish last season and the Champions League football that accompanies it. They know much better is expected of them by everyone connected to the club, from fans through to the boardroom. AC Milan ended second behind rivals Inter in the previous campaign and will believe they have the tools to build on that and go one better this term. A win at Juventus would inject confidence into the ranks.

The recent stats associated with this fixture show the team playing away from home won the points on each occasion last season. Juventus took a 3-1 win in Milan before AC grabbed a 3-0 victory on their travels. Two of the last three games has seen both teams find the net at least once and neutrals hope that run continues here.

Juventus have been unconvincing

Juventus started this campaign full of promises. They knew they had let fans down last season when giving up their crown without a fight and were determined to wrestle it back. Things haven’t gone according to plan so far for the Old Lady, though, as they lost star player Cristiano Ronaldo to Manchester United and have stumbled out of the traps in the new Serie A season. The club is in crisis and sits much closer to the bottom of the league than the top of the table.

The home team’s form after three games read one draw followed by two defeats. The one point on the board puts them down in 16th position, with only four teams currently worse off. It has been quite a fall from grace for the former rulers of Italian football. Only the bottom two clubs Hellas Verona and Salernitana, currently have fewer points against their name. That shouldn’t be the case for too much longer, but there’s no doubt this is about as bad a start as fans could have feared, especially in a year when big things were expected.

After drawing 2-2 away to Udinese on the opening weekend of the season, things have gone from bad to worse for the club. They have since lost 1-0 at home to Empoli and 2-1 away to Napoli. Those were narrow defeats but they came against opponents Juventus would have been expecting to beat. When setting out their plan for the season, the coaching staff would have targeted at least seven points, not one.

It was a case of close but not close enough for AC Milan last season as they finished as best of the rest behind champions Inter Milan. They may have put the bite on their rivals for much of the fixture list and looked for long periods of the season like serious challengers for the title, but in the end, AC Milan lacked the kind of consistency that was shown by Inter Milan. There was the correct champion, and no one at AC could deny their neighbours the title.

What the runners up did take from last season’s near-miss was the lessons learned, and they’ll be eager to use those to improve in the coming campaign. The team found out the hard way that winning a boring match 1-0 is far better than drawing 4-4 in an end to end thriller. One may look good and exciting for the cameras, but it’s the other than wins titles. AC Milan must prepare themselves for grinding out results and winning ugly.

The visitors have picked up where they left off and started the week in second place, hanging onto the coattails of current leaders Roma. They have won each of their first three games, picking up a maximum of nine points which is the same as Roma and Napoli. The stats show Milan have scored seven goals and conceded one, which makes them the best defence in the league. That backline will come in handy again.

Juventus are the home team, and many football fans are still wary about taking them on, waiting on the big break that is going to turn around their season. If Juve is about to spark to life, they have shown us no signs of it so far this season, and the back to back defeats in their last two have been deserved. They are a shadow of their old selves, and that will encourage the visitors who arrive in fine form.

If we ignore the fact this is Juventus and AC Milan and concentrate on the facts, this game is between a side near the bottom of the league and an opponent at the top, one without a win and one with a 100% record. Juventus has scored only three goals and is up against a side that has conceded one. If this game follows the stats, it could end up a strong away win, but it’s always dangerous to write Juventus off.

If Juventus play anywhere near to their capabilities, they are good enough to push their opponents hard, create chances, score goals and win the points. That’s a big ask from a team that has looked miles off their best so far this season. It will be interesting to see how the home support reacts.

The pre-match betting odds available at 22bet ahead of this game has Juventus priced at 2.245 with AC Milan deemed a 3.3 option and the draw 3.28.

Make sure to bet on Juventus v AC Milan with 22Bet!