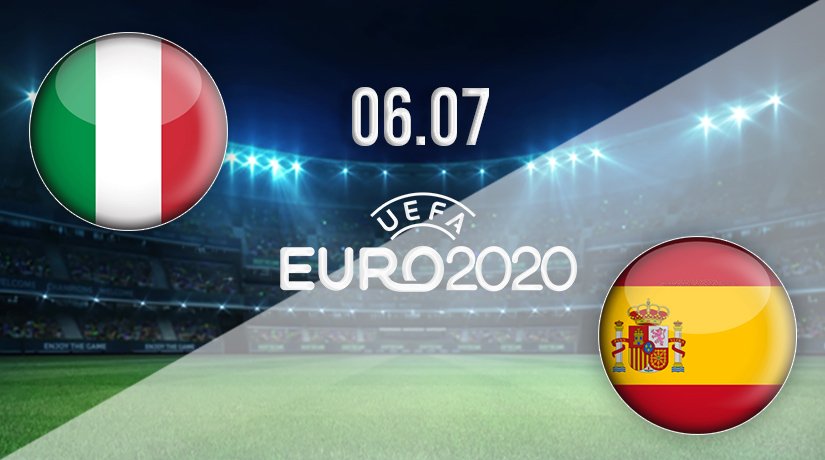 We have arrived at the semi-finals of Euro 2020, with the pack having been whittled down to just four teams. The remainder of the tournament will be played at Wembley Stadium, with both semis and the final fought out at the world-famous London venue. There will be a sizable crowd in attendance for the last three matches as we celebrate the closing stages of what has been a memorable festival of football.

We get going on Tuesday when two former European champions clash in Italy and Spain. Interestingly, both teams were written off by most respected pundits back in June when the tournament opened. Experts preferred the chances of France, England and Belgium, but only the Three Lions remain active. Critics were made to eat their words, and there will be more humble pie served up when one of these teams make it to the final. Will it be the Italians at Wembley on 11 July or the Spaniards who are chasing down a world record fourth title?

As you’d expect with two of the biggest teams in world football, these rivals are no strangers to facing off on competitive action. The head-to-head stats are finely poised at present, with Italy on five wins, Spain on five wins and the pair playing out a total of nine draws. The most recent clash produced a 3-0 win for the Spaniards at the World Cup in 2017. Will we see more of the same here, or can the Italians record their first win over Spain since beating them 2-0 at the Euros in 2016? We’ll find out soon enough.

Italy are the dark horse

It may sound foolish, especially at this stage of the play with Italy pushing for a spot in the final, but they kicked off the delayed Euro 2020 tournament as one of the outsiders in the outright betting. They started as many football fans’ dark horses to cause an upset and go all the way to the final. They are now just one match – potentially 90 minutes – away from achieving that. Italy was impressed during qualifying and came through Group A as pool winners with a maximum of nine points on the board from three games. That tally saw them finish five points ahead of runners up Wales and third-placed Switzerland.

Since advancing to the knockout rounds, Italy has dispatched Austria in extra time in the Round of 16 before eliminating Belgium in the quarter-finals. The match against Austria was one they were expected to win, but that game ended goalless after 90 minutes. Chiesa scored the first goal on 95 minutes before teammate Pessina added a second on 105. Austria struck back with a goal from Kalajdzic with 114 on the clock to set up a nervous end to the match, but Italy did what they do best and held on.

In the quarters, they were drawn against Belgium, who started the competition as third favorites, and it was another close contest, but that match was settled without the need for extra time. Barella and Insigne scored to give the Italians a two-goal lead, but Lukaku struck back from the penalty spot in added time at the end of the first half. Despite creating chances in the second 45, the Belgians were unable to draw level and were eliminated from the running by the better team on the day.

Spain was another team who was, somewhat surprisingly, written off by the experts before Euro 2020 began, but they have barely put a foot wrong in the tournament so far. They didn’t start as well as fans would have hoped, finishing second in Group E behind Sweden. The Spaniards posted stats of one win, and two draws to mark up five points, two fewer than the group winners. It wasn’t the most impressive form, but it was enough to progress.

Moving on to the knockout stages of the tournament and that’s when Spain began to go through the gears. They hammered Croatia 5-3 in the Round of 16 but needed extra time to progress. In what was a thrilling encounter, the game ended locked at 3-3 after 90 minutes, Croatia scoring a last gasp equalizer. Spain proved the fitter team of the two with goals from Morata on 100 minutes and Oyarzabal on 103 booking their spot in the next phase.

Moving to the quarters and Spain were again victorious, but penalties were required to separate the teams on that occasion. The game ended locked at 1-1 after 90 minutes and then extra time, but the Spanish held their nerve from the spot, winning 3-1 on penalties to reach the semi-final. Having ridden their luck in those matches, Spain will want to be more convincing here.

This match has all the ingredients of a thriller and is a game good enough to decide the champion. Instead, it’s a place in the final that’s at stake rather than the trophy. Spain was rather fortunate to get through, but Italy has progressed with style, improving with the passing of every game.

That is sure to catch the attention of football fans making predictions, but Spain will see this for what it is – a one-off game. This is a chance to make the final, and there will be no need for either manager to rally their troops at this late stage. Both sets of players know exactly what is on the line here.

The pre-match betting odds at 22Bet has Italy priced at 2.45 to win this game in regulation time with Spain available at 3.075 and the draw 3.13.

As well as match betting, there are also over 100 pre-match and in-play markets available at 22Bet. The most popular of these include both teams to score, correct score, first goalscorer and method of victory. The latter allows you to predict how a team will win, such as Italy in 90 minutes or Spain in extra time.

Want to wager on other betting markets, such as BTTS, Handicap or Total Score? Make sure to bet on Italy v Spain with 22Bet!