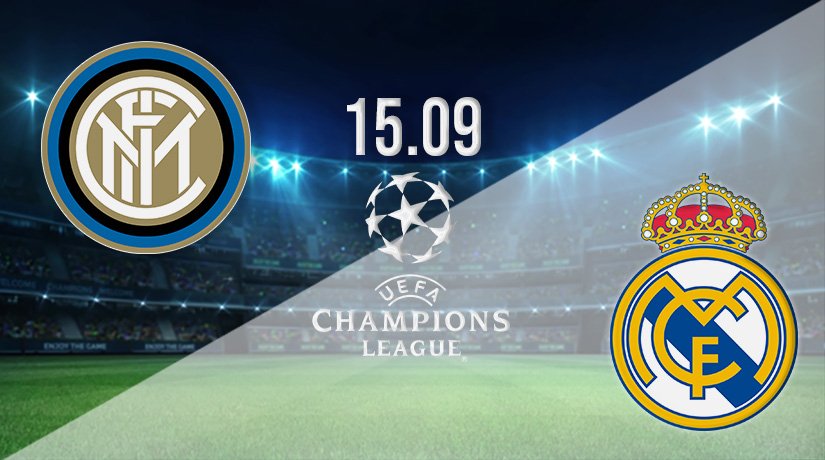 The midweek football schedule throws up some fascinating contests and there’s plenty for lovers of the beautiful game to get excited about on Tuesday and Wednesday. Each match from round one of the group stages will be available to follow live on television and live streaming sites, and there’s sure to be a huge audience tuning in to the action from Milan, where Inter Milan host Real Madrid. This Group D fixture is scheduled to start at 20:00 GMT and promises to be a cracker as both battle for supremacy in the division.

Inter Milan and Real Madrid are expected to occupy the top two slots in the group after six games and progress to the knockout stages of the Champions League. With Sheriff Tiraspol and Shakhtar Donetsk making up the pool, it’s possible the winner of the group will emerge from this match. Which team will draw first blood and hit the top at the earliest opportunity, grabbing the advantage? Will it be the champions of Italian football or the competition’s most successful team?

It will come as no surprise to football fans that Inter Milan and Real Madrid are no strangers to each other and have met many times in the past at the highest level. The pair have faced off 11 times in the past, and the stats are dead even with five wins for Inter Milan, five for Real Madrid and the spare ending up as a draw. The most recent clash produced a 2-0 victory for Blancos at this venue in November 2020, with the goals scored by Eden Hazard and an unfortunate own goal from Achraf Hakimi on the hour.

Inter Milan hoping to build on their success

Inter Milan caused a huge upset last season when winning the Serie A title. In doing so, they ended the long-running dominance of Juventus, who fell from grace, slipping from champions to barely clinging on to a top-four finish and place in this season’s Champions League. The Old Lady got nowhere near a rampant Inter side who held off the attentions of derby rivals AC Milan to lift the trophy. The difference between the two Milan teams last season was the consistency of Inter. They worked their way into the lead and held onto it, reeling off win after win and edging closer to the finish line.

The club now aims to build on that success and retain their Italian Serie A championship while getting closer to winning the Champions League. They have the players to battle on both fronts and fans will expect to see Inter make it through the groups and to the latter stages of this tournament. To give themselves the best chance of achieving that, they must avoid defeat on their own patch but know the pool won’t be won or lost in the 90 minutes that awaits them here.

Inter Milan sit fourth in Serie A after three games played with seven points gained from a possible nine. They got off to a strong start, winning each of their first two games but stumbled to a weekend draw. That share of the spoils and loss of their 100% record came when playing out a 2-2 finish away to Sampdoria. It was a game they were expected to win and went into the break, winning 2-1 but were pegged back early in the second half.  Milan would have been disappointed at their defence, but a share of the points was a fair result.

Blancos want to get back on top

Real Madrid rank as the Champions League’s most successful team with a record number of titles, but they have watched on as English teams have won the last two gongs. That double began when Liverpool, who Real Madrid had defeated in the previous final, won when beating Tottenham before Chelsea and Man City clashed last season, with the Blues coming out on top in that game. Blancos are eager to return to the top of European football and look to have been handed a simple passage through to the knockout rounds.

Winning the group would set them up for what could be an easier route to the final, and taking three points from Milan would also send out a statement of intent. It would show Real Madrid are the top dogs in this pool and are serious about going through as group champions. They certainly have the players and quality in their squad to achieve that but may see a draw on matchday one away to the Italian champions as a decent result, leaving it to their other outings in the campaign to rack up the wins and the goals.

Domestically, Real Madrid lost their La Liga title to derby rivals Atletico Madrid last season. With Barcelona’s off-field problems, losing Lionel Messi to PSG, it appears Real’s main rival for the trophy will be champions Atletico Madrid. A fascinating contest awaits with both sides already locked on 10 points at the head of the pile. Real have won three and drawn one of their four league starts and take confidence from back-to-back victories ahead of this game.

This is a meeting of two huge names in the competition, and it could end up being the final if things fall into place for both clubs this season. Inter Milan hold the home advantage and will be eager to make it pay but know avoiding defeat is more important than going all out, throwing caution to the wind and trying to claim all three points. The Italian champions may see the value of a draw in this game.

Real Madrid has the experience of winning big games in this competition, but that experience has taught them when it’s best to hit form. It rarely pays to show their best during the groups, and Blancos will know this isn’t an all or nothing game. If they can get something out of this game and look ahead to future matches, they will be in a strong position to live up to expectations and come through as pool winners.

Make sure to bet on Inter Milan v Real Madrid with 22Bet!