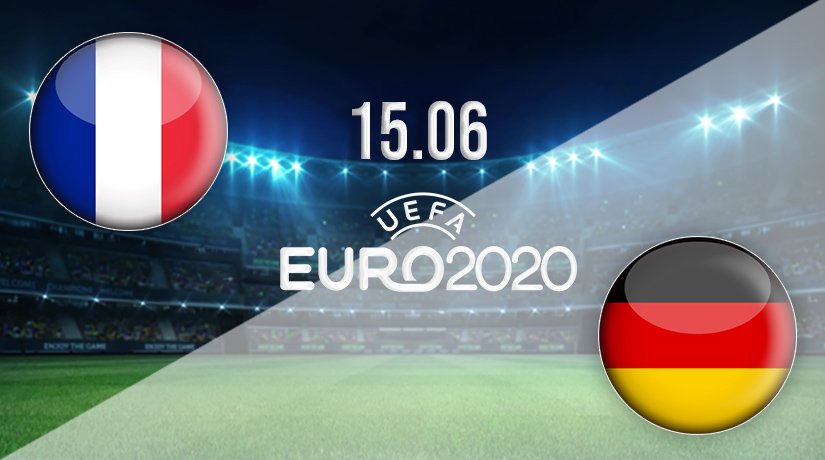 The big matches from Euro 2020 continue to come thick and fast, and armchair fans have a cracker to look forward to on Tuesday night. Two previous winners and teams near the head of the pre-tournament outright betting clash in France and Germany. Les Bleus are the form side heading into this match and are favourites with most pundits to win the trophy at Wembley in June, but Germany has the home advantage. Will they make it count?

These teams have faced off a total of 16 times before, and it’s France who has dominated over the years. The head-to-head stats read eight wins for Didier Deschamps and co against the four of Germany and four draws. In such a tight group, nations know the damage a defeat could do to their chances of making it to the knockout stages.

This match will be beamed across the world on live TV from 20:00 GMT. It’s the second game of the day and the second from Group F after Hungary host holders Portugal in Budapest at 17:00. Group F is the tightest pool of the lot this summer, and we will lose at least one of the big names. Could it be France or Germany? Let’s take a closer look as our football experts preview the match.

It’s worth knowing that France is unbeaten against the Germans in five games, a run that stretches back to 2014 in the World Cup when Mats Hummels goal was the difference. Since then, the teams have met five times, and we see three wins for France and two draws. Those who enjoy following the stats when making theri predictions may be interested to know France have won 2-0 twice in that run and scored exactly two goals in all but one of the five games. That will give fans confidence.

Deschamps and his side also enter this game in stunning form, and they have their tails up following an eye-catching run. They were last seen in action beating Bulgaria 3-0 in a friendly match earlier this month. France has won each of their last four games and hasn’t suffered defeat in seven games. The last team to beat them was Finland last November in a friendly match shock result. France has won without conceding a goal in their previous four games, scoring nine of their own.

Antoine Griezmann has scored in each of France’s last three games, including the winner in a 1-0 away to Bosnia in their previous competitive match. The star attacker will sit behind Mbappe on matchday and will offer support in both attack and midfield. Deschamps will ask him to be the link, turning defence into attack, and Griezmann is good enough to get in on the goals by shooting from a distance or picking up scraps on the edge of the box. He’ll fancy himself to score against Germany, just as he did last time, banking a double in that 2-1 victory in 2018.

Germany may be one of the early favourites with pundits to win Euro 2020 and become record-breaking champions on four titles, but they prepare on a woeful run of form. Joachim Low’s side has won only one of their last three games with the spare coming over Latvia in a friendly match last time out. That game did produce a stunning 7-1 victory, but only after the team had lost to North Macedonia in a World Cup qualifier and drawn 1-1 with Denmark. That gives fans cause for concern ahead of this match.

Germany knows if they continue to perform below-par and lose this game, they could find themselves out of the competition almost before their challenge begins. France, Portugal and Hungary all believe they are good enough to progress and will all be quietly confident over their chances of finishing as pool winners. So too will Germany, of course, making for an interesting group that is likely to go right down to the wire.

Germany suffered a shock 2-1 defeat to North Macedonia in their last competitive match, ranking as one of the nation’s worst results in recent years. North Macedonia is an improving side, but it was shocking to see them take the lead in that game just before the break. Gundogan drew the teams level from the penalty spot on 63 minutes, but there was a final twist in the tale as Elmas stuck a late winner.

Germany may hold the home advantage here, but France is the form team and one playing with confidence. They are favourites to win Euro 2020 and, at this stage, look worthy of their place at the top of the pile. In attack, Les Bleus are packed with talent. Mbappe will get plenty of service from the midfield, and we all know he’s good enough to score important, match-winning goals to help his nation win points. The team will hold no fear heading to Germany for this group opener.

German manager Low will feel he has a point to prove in this championship after some dreadful recent results, including that embarrassment against North Macedonia. The players are under pressure to perform, and the crowd inside the Munich venue will be on their backs if things don’t go according to plan. That will make things even more difficult.

The pre-match betting at 22Bet has France priced at 2.696 with odds off 2.765 available on Germany. A draw wouldn’t be the worst result for either manager, and you can back the level finish and share the spoils at 3.125.

As well as the match betting, there is also a wide range of specials available. These include both teams to score, total goals, first goalscorer, handicap, half time/full time and plenty more besides. There’s something to suit everyone looking to place a bet on the outcome of this match.

Visit 22bet for all your expert big match previews at Euro 2020 this summer.

Make sure to bet on France v Germany with 22Bet!