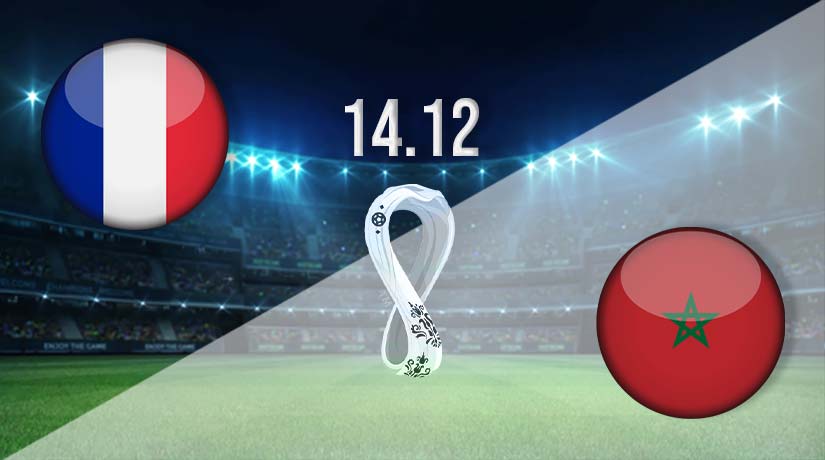 The second of this week’s semi-final matches from World Cup 2022 will be played from 7.00 pm GMT on Wednesday as France takes on Morocco. Les Bleus are the favourites to win this match and go on to defend the trophy in the final, but Morocco is proving to be the surprise package at the winter World Cup. They have emerged from the pack as genuine contenders, convincing critics that they should be taken seriously. The African side is here on merit and will want to put on a show against the reigning and defending champions.

Will France progress to Sunday’s final as they bid to make it two wins on the bounce at this level? They are certainly shaping like a champion good enough to defend their title, and they’ve barely put a foot out of place in the Arab World. Despite several injuries to key players, this French side has impressed, and it looks like they still have some in the tank. We’ve not yet seen the best the French have to offer this year, and there’s more to come. This is an excellent chance for the side to repeat history by winning back-to-back World Cups. But they will be made to work hard by an equally ambitious opponent.

Morocco still going strong at the last four may be a surprise from Qatar, but the high-flyers believe they can go all the way to the title. Morocco has flair, a strong defence, and an attack that has already proven they pay no attention to the reputation of their opponents. Morocco must be at their best to have any chance of eliminating the champions and booking their place in Sunday’s deciding match. But so, too, must France, as they will be made to work hard for every minute of Wednesday’s showdown.

It hasn’t been plain sailing

France is in the last four and starts as the favourites, with many of the top pundits to win on Wednesday and then again on Sunday. They can do the double and ensure the World Cup trophy remains in Paris. But this winter World Cup hasn’t been all plain sailing for the team. The champions won their group ahead of Australia, Tunisia, and Denmark with two wins and a loss, helping them progress. The spare defeat came on matchday three against Tunisia when they were already through. France had secured the top spot in the pool by the end of two games, and it appeared like they had let their guard slip.

Great teams rarely go through a major competition with a 100% record and a string of impressive wins. Being a world champion is about timing your efforts and saving your best for the later rounds when knockout football helps to even up the scores. And that’s when Les Bleus began to show exactly what they are made of by beating Poland and England in two memorable games. They beat the Poles without much fuss, winning that game by a convincing 3-1 scoreline. Then came Saturday’s huge match against England, which is a runner for the game of the competition. It could’ve gone either way, but victory went to the French.

A blistering start from the champions set the standard for the evening, and France got the lead their good play deserved when Tchouameni found a way past the England goalkeeper in 17 minutes, assisted by Griezmann. But England fought back through Harry Kane, who scored an equaliser from the penalty spot in the second half’s early exchanges. France again took the lead when Griezmann supplied Giroud, the former Chelsea and Arsenal striker breaking the hearts of England fans everywhere.

They may have been written off as a team expected to make little impact in Qatar, but Morocco is going strong while many of the favourites are already home. The African representatives are in the final four, and it wouldn’t be a massive shock if they were to go through. The likes of Spain, Brazil, and England going out before the Moroccans is a bigger surprise. The underdogs have done their bit, but know the hard work starts here. Teams will now respect the threat they bring, and the element of surprise is gone.

Morocco finished top of Group F ahead of Croatia, who played Argentina on Tuesday and were the runners-up at World Cup 2018 in Russia. They qualified as leaders with two wins and a draw, making them one of only a few teams who remain unbeaten at this stage. Four goals scored and one conceded with seven points against their name ensured Morocco finished two points better than their fellow semi-finalists. That should have been enough to catch the attention of doubters, but they remained the underdog, and it’s a tag they wear well.

Morocco then beat Spain on penalties in the Round of 16 following a 0-0 draw after 90 minutes and extra time. The Spanish were poor from the spot, missing all three chances as their opponents raced into a 3-0 lead and a place in the quarter-finals. That’s where they met Portugal, and it was another tight affair, but one Morocco finished on top. They won that match by a 1-0 score thanks to a goal from En-Nesyri just before the interval. Cristiano Ronaldo and his teammates were inconsolable at the whistle as their dreams of becoming world champions lay in ruins.

France and Morocco have played only four times previously, with Les Bleus unbeaten in those games. The head-to-head stats show two wins for the French and a pair of draws, with the most recent clash producing a four-goal share in 2007. This would be the best time for Morocco to get off the mark.

Morocco is unbeaten, but there’s no substitute for experience, and the French has that in abundance. Their best should be good enough to progress with a narrow victory.

France is the pre-game betting favourites at 22bet with odds of 1.51 available to backers. Morocco can be supported at 7.5 while a draw is 3.88.

Make sure to bet on France v Morocco with 22Bet!