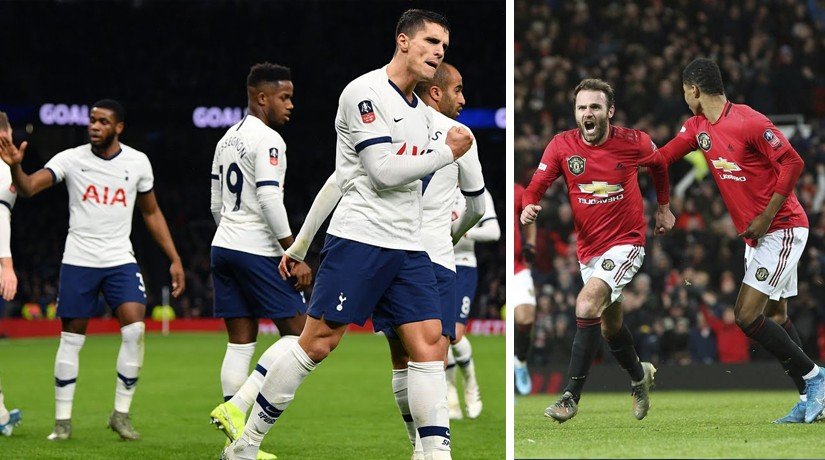 This week graced us with seven classic FA Cup-energy-pumped clashes that impressed with smart goals, classic underdog stories and much, much more. Here are the highlights of the FA Cup 3rd round play-offs.

Watford’s trip to Tranmere was postponed due to heavy rain and is now scheduled for Thursday, January 23rd. This means that The Hornets will play three games in six days; Saturday against Tottenham and then Tuesday’s crucial clash against Aston Villa.

Watford’s FA Cup third-round replay at Tranmere has been postponed following heavy rain. After a pitch inspection on Tuesday afternoon, it was decided the match could not go ahead following after the ground fell victim to Storm Brendan. There were doubts whether the fixture would go ahead at Prenton Park after Sunday’s Women Super League match between Manchester United and Liverpool was called off because of a waterlogged pitch on the same ground. #facup #rematch #replay #tranmere #watford #football #fussball #soccer #rain #heavyrain #news #22bet

Spurs struggled to earn their 2-1 victory over Middlesbrough and knowing that the FA Cup represents the only hope for a trophy that Tottenham can aim for this season we expected a more confident side than the one we witnessed this Tuesday.

Jose Mourinho’s men were awarded a second-minute goal when Middlesbrough keeper Tomas Mejias crossed the ball to Giovani lo Celso, who ended up messing up a challenge and scored.

9 – For just the second time during his 923-game managerial career, José Mourinho has seen one of his clubs concede at least once in nine consecutive matches in all competitions, also suffering the same fate with Chelsea between May and September 2015. Porous. #EmiratesFACup pic.twitter.com/Tuig6IW1Qf

Middlesbrough wasted some chances whilst Spurs sneaked their way through to a victory. Fifteen minutes after the opener, the hosts doubled their lead when Eric Lamela flicked the ball past the Boro keeper after a gorgeous run. And George Saville sealed the 2-1 score seven munites before time.

#Boro pegged back twice at the Riverside, but a point and plenty to be positive about #UTB

2 – Giovani Lo Celso and Erik Lamela are the first pair of Argentinians to score in the same FA Cup match since Pablo Zabaleta and Sergio Agüero did so for Manchester City against Huddersfield back in March 2017. Albiceleste. #EmiratesFACup pic.twitter.com/2OREvB8fUw

Shrew’s Aaron Pierre found the back of the net in the 89th minute to give his team a 1-0 victory over Championship club Bristol City, which set up a clash against Premier League giants, Liverpool in the fourth round.

Here it is again, unfiltered. 😍

Sam Ricketts relishes in the chance to play Liverpool, saying: “It will be a special occasion for everyone involved. The players first and foremost because they’re the people that have done it, the supporters – you could see what it meant coming on the pitch at the end of the game.”

50% – Shrewsbury Town have progressed into the next round in four of their last eight FA Cup ties versus teams from a higher division – this after they were eliminated in 12 of their previous 13 such ties (excl. qualifiers). Rising. #EmiratesFACup pic.twitter.com/UqGvKQLH7W

We are just as excited, Sam! See you on Sunday, January 26th.

Coventry achieved a comfortable 3-0 victory over Bristol Rovers and have now scheduled a home match at St Andrew’s with their stadium landlords, Birmingham City.

2 – Coventry City have lost their last two FA Cup third-round replays, losing 0-2 vs Bristol City in 2007 and 1-2 vs Portsmouth in 2010; the Sky Blues had progressed from their previous three such games before losing the last two. Rebound. #EmiratesFACup pic.twitter.com/n5mVpNCef4

“It was a zippy surface because of the rain,” said Coventry manager Robins. “But we looked in decent shape, Pasky’s goal was outstanding. We kept at it, defensively we were OK. And in the second half we got better. But we were outstanding – really good performance.”

A Max Biamou brace and a debut goal for Josh Pask send the Sky Blues into the next round of the FA Cup.

The Royals get some good news at last! On Tuesday night Championship club Reading triumphed over League One Blackpool with goals from Lucas Boye and Jordan Obita.

Report | Goals from Boye and Obita earn the Royals a fully deserved win at Bloomfield Road and a Fourth Round encounter with either Carlisle or Cardiff City.

They are set to play against Cardiff City in the next round as the Wales side overtook Carlisle in a thriller on Wednesday night.

9/10 – Reading have progressed from nine of their last 10 FA Cup ties against sides from a lower division, failing only in the third round in 2011-12 against Stevenage. Formality. #EmiratesFACup pic.twitter.com/TffS5mPFjC

“They all stood up and not just stood up, but they looked like players, proper players,” said the proud Reading manager Mark Bowen. “In a funny way, it never became a battle because our decisions on the ball were really clever and sharp at times.”

Newcastle thrashed Rochdale 4-1 at St. James’ Park on Tuesday night with Joelinton finally finding the back of the net to end his 20-game goal drought and send the Magpies into the FA Cup fourth round.

1 – Newcastle striker Joelinton has netted his first Newcastle goal since August, ending his 20-game goalless drought for the club in all competitions. Relief. #EmiratesFACup pic.twitter.com/R1IG5dfaf8

Minute 17 saw an own goal by Rochdale’s Eoghan O’Connell. Then Matty Longstaff, Miguel Almiron, and Joelinton all scored before Jordan Williams earned a consolation.

Newcastle, who have not gone further than fourth round in over 13 years, are scheduled to host League One Oxford United on Saturday, January 25th.

#NUFC progress into the Fourth Round of the #EmiratesFACup! ⚫️⚪️ pic.twitter.com/La13e0sunw

Old Trafford hosted Wolves for their FA Cup third-round clash against Manchester United. Juan Mata’s elegant chip over John Ruddy made the only difference in a match that did not showcase either team’s best performance.

3 – Juan Mata has been directly involved in three goals in his last two games for @ManUtd (one goal, two assists), as many as he was in his first 20 appearances of the 2019-20 season in all competitions before this. Breakthrough. #MUNWOL pic.twitter.com/2bU39hKvpc

Manchester United are to meet either Tranmere Rovers or Watford in the next round.

“They are a difficult team, they play in a certain way, they do it very well, and it’s difficult to break them down,” commented Mata after the game. “But today has been a good result for us, we’ve had a good couple of days, and now we’ve got a big one coming [Liverpool at Anfield on Sunday] so hopefully we can keep it up.”

Cardiff City secured their spot in the fourth round of the FA Cup after overcoming Carlisle away in a seven-goal thriller.

What an #EmiratesFACup tie!

The goal-fest produced an epic nail-biter at packed-to-the-brim Brunton Park on Wednesday night, where the visitors came on top thanks to Danny Ward, Josh Murphy and an Aden Flint double.

The Bluebirds will now face Reading on Saturday, January 25th.

Well that was quite a cup tie! City progress! 💙 #CityAsOne

See you for the fourth round of the FA Cup!